Animal species are disappearing, and we the people are the problem

Thousands are at risk of extinction because of human activities. 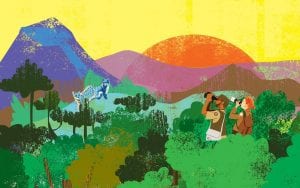 The golden lion tamarin is a small, orange-maned monkey that swings from branch to branch in Brazil’s coastal rain forests. It is also endangered. The trees it depends on have been chopped down to make way for cities and farms, leaving only small islands of habitat, instead of a continuous forest that connects the monkeys to one another.

This deforestation has left little space where golden lion tamarins can flourish, and that’s landed them on the International Union for Conservation of Nature’s “red list of threatened species” — a grim tally of more than 17,000 types of animals at risk of going extinct, or dying out. The critters on the IUCN list appear on a spectrum from “least concern” — or not so bad off — to “critically endangered.”

Whatever the outlook, we are the reason most of the animals are on the list. According to the World Wildlife Fund, the world’s populations of mammals, birds, fish and reptiles have dropped 60 percent since 1970, and human activity is to blame.

“Species have always gone extinct naturally,” said Stuart Pimm, a professor of conservation ecology at Duke University. “But the basic fact is that human actions are driving species to extinction about a thousand times faster than they would go extinct naturally. That’s the scale of the problem.” 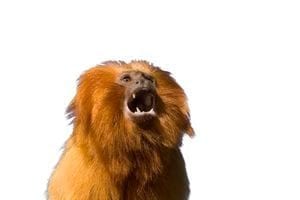 The habitat of the golden lion tamarin is disappearing because Brazil’s forests are being chopped down.
(Getty Images/iStockphoto)

This happens in various ways. The golden lion tamarin and many other endangered animals are threatened by fragmented habitat, which can separate males and females and keep them from having enough babies for a thriving population. Others struggle to survive because people have introduced invasive species, such as rats or goats, that eat their eggs or the plants they depend on. Pollution, including vast amounts of discarded plastic, and climate change may be harming others.

Then there’s hunting. Populations of pangolins, mammals that look like little armored anteaters, are dwindling as poachers trap them for their meat and for their scales, which are used in traditional medicines that have no proven benefits.

Even as animals rapidly disappear, Pimm said there’s reason to be hopeful. Conservation biology, a field focused on keeping wildlife around, has existed for only a few decades, and it’s making progress, he said. In much of the world, whale watching has taken the place of whale hunting. Grizzly bears and many other animals in the United States are protected because they’re on the Endangered Species List.

“Once a species gets put on the list, its chances of surviving are very good indeed,” Pimm said.

People, including many kids, have become more aware of their impact on the environment, and they’re taking action. They may reject plastic bags and bottles or use a bike-share program to get around town. Zoos are more focused than ever on helping wild populations of the animals they have on exhibit.

One of the animals on display at the Smithsonian’s National Zoo in Washington is the golden lion tamarin. And although it is endangered, things are looking up for this carrot-topped primate. Conservation organizations, including one Pimm founded, Saving Species, have worked to reconnect the small swaths of forest where the monkeys were barely hanging on.

Now about 3,200 golden lion tamarins exist in the wild, according to the IUCN. That’s 20 times as many as there were in the 1990s, when the species was listed as critically endangered.

“The golden lion tamarin was on the brink of extinction. It isn’t now,” Pimm said. “There’s a lot of hope.”