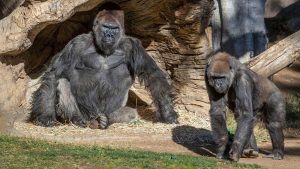 Several of the gorillas at the San Diego Zoo Safari Park have been infected with the coronavirus that causes COVID-19 and developed symptoms. JAIME WELLS

When two gorillas at the San Diego Zoo Safari Park started to cough last Wednesday, veterinarians tested their fecal samples and found RNA from the coronavirus that causes COVID-19. All eight gorillas in the troop have been exposed and several are now exhibiting mild symptoms, such as coughing and congestion, according to an announcement from zoo officials yesterday. (A separate report on Twitter claiming that gorillas in the Houston Zoo were also sick with the coronavirus, SARS-CoV-2, turned out to be incorrect.)

The news from San Diego quickly reverberated among primatologists who study endangered great apes in the wild, where human respiratory viruses are already the leading cause of death in several chimp communities and cause 20% of sudden deaths in mountain gorillas in Africa. The infection of the western lowland gorillas in San Diego confirms what the scientists suspected—that apes can get sick from SARS-CoV-2 because the ape form of the angiotensin-converting enzyme 2 receptor that the virus uses to enter cells is identical to the human one. The new evidence validates the measures taken so far to protect gorillas in their natural habitats, researchers say.

“The fact that gorillas are susceptible to SARS-CoV-2 should come as no surprise,” says disease ecologist Tony Goldberg of the University of Wisconsin, Madison. “Fortunately, gorillas at zoos have excellent medical care, and most will likely pull through due to the efforts of dedicated veterinarians. That’s not the case for gorillas in the wild, though.”

The gorillas in San Diego are being closely monitored, and are being given vitamins, fluids, and food but no specific treatment for COVID-19. However, the veterinarians are consulting doctors who treat COVID-19 in humans in case the apes’ symptoms worsen. There are currently no vaccines for pets and other animalsthat can get infected with the pandemic coronavirus, but some are being tested, zoo officials say. “Aside from some congestion and coughing, the gorillas are doing well,” Lisa Peterson, executive director of the San Diego Zoo Safari Park, wrote in a press release. “The troop remains quarantined together and are eating and drinking. We are hopeful for a full recovery.”

Zoo officials suspect the gorillas got infected by an asymptomatic member of the park’s wildlife team who tested positive for the virus. That person and other staff have been wearing masks, washing their hands, and following COVID-19 safety protocols recommended by the Centers for Disease Control and Prevention and San Diego County Public Health. The park has been closed to the public since 6 December 2020 as part of California’s lockdown efforts to curb coronavirus cases.

As SARS-CoV-2 spread around the world, researchers began to take steps to protect endangered great apes in Africa and Asia as well as the local people. They have cordoned off jungle and forest preserves, sheltered at the research center where they study apes, worked with local villagers and government authorities to reduce contact with apes, and worn masks to prevent virus transmission in the forest. But though tourism was initially banned at all ape refuges in Africa, some has resumed because the income is critical to the livelihood and health of people living nearby. “We can’t expect a halt to tourism, but we need to insist that the relevant authorities enforce health precautions and do not sacrifice the nonhumans for the sake of maximizing short-term revenues,” says primatologist David Watts of Yale University, who studies apes in Uganda.

Apes in the wild cannot social distance, Goldberg says. “Wild gorillas live on a razor’s edge of survival as they struggle to find food, avoid danger, and adapt to shrinking habitats,” he says. “If wild gorillas or other wild apes were to contract COVID, we would expect the consequences to be much worse. … The most important thing we can do for wild primate populations is to keep the virus out.”

Meanwhile, primatologists hope they can learn something from the captive apes’ illness. “Hopefully, these cases can provide some very valuable information on how gorillas respond to this virus so we can better understand the risk it poses to wild ape populations,” says primatologist Tara Stoinski at the Dian Fossey Gorilla Fund.