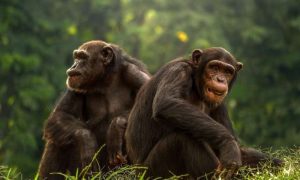 An international team of researchers has found what they believe to be the pathogen that has been killing chimpanzees at a Sierra Leone sanctuary for approximately 15 years. In their paper published in the journal Nature Communications, the group describes their study of multiple samples of chimp tissue retrieved from some of the dead chimps and what they have found thus far.

Approximately 15 years ago, workers at Sierra Leone’s Tacugama Chimpanzee Sanctuary began to see chimps in their sanctuary become ill from a new and mysterious ailment—alarmingly, every chimp that became ill died. In the beginning, the team thought that they had more than one pathogen on their hands because, for some chimps, the main symptoms were gastrointestinal stress while, for others, symptoms were clearly neurological. Over time, the team became convinced it was a single pathogen as they saw increasing numbers of chimps with both types of symptoms.

In 2018, one of the researchers on this new effort, Leah Owens, spotted a bacterium in the brain of one of the chimp victims that stood out because of its cubic structure. Testing of the bacterium found it to be a unique species, which they named Sarcina troglodytae. After finding the bacteria in other dead chimps but never in those that were not infected, the researchers focused more closely on it. They found that it resembled Sarcina ventriculi, a strain that infects humans, generally resulting in gastrointestinal stress.

Much more work still needs to be done, however, to prove that S. troglodytae is behind the deaths at the chimp sanctuary. Prior research has shown that chimps living there are most likely to become ill with the new disease in March. Also, no one knows where the bacteria might have developed or if it can infect humans. Some prior research has also suggested that the bacteria’s spores might be common in the sanctuary. Others studying the disease have noted that there is the possibility that some unique factor of chimp biology could be playing a role in the progression of the disease.

As the research continues, the team at the sanctuary are assuming that the newly discovered bacterium is to blame and are treating the chimps who fall ill in ways designed to fight off bacterial infections.