Chimpanzees Are Going Through a Tragic Loss

Chimpanzees Are Going Through a Tragic Loss

By fragmenting forests and killing off individuals, humans are stopping the flow of ideas among our closest relatives 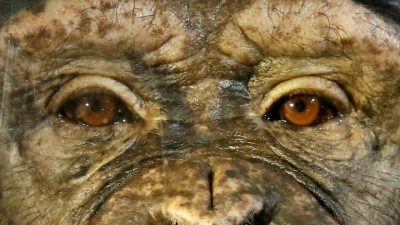 The eyes of a female chimpanzee. (ILYA NAYMUSHIN)

Imagine that an alien species landed on Earth and, through their mere presence, those aliens caused our art to vanish, our music to homogenize, and our technological know-how to disappear. That is effectively what humans have been doing to our closest relatives—chimpanzees.

Back in 1999, a team of scientists led by Andrew Whiten (and including Jane Goodall) showed that chimpanzees from different parts of Africa behave very differently from one another. Some groups use sticks to extract honey, while others use those same tools to fish for ants. Some would get each other’s attention by rapping branches with their knuckles, while others did it by loudly ripping leaves with their teeth. The team identified 39 of these traditions that are practiced by some communities but not others—a pattern that, at the time, hadn’t been seen in any animal except humans. It was evidence, the team said, that chimps have their own cultures.

It took a long time to convince skeptics that such cultures exist, but now we have plenty of examples of animals learning local traditions from one another. Some orangutans blow raspberries at each other before they go to bed. One dolphin learned to tail-walk from captive individuals and spread that trick to its own wild peers once released. Humpbacks and other whales have distinctive calls and songs in different seas. And chimps still stand out with “one of the most impressive cultural repertoires of nonhuman animals,” says Ammie Kalan, of the Max Planck Institute for Evolutionary Anthropology.

But just when many scientists have come to accept the existence of animal cultures, many of those cultures might vanish. Kalan and her colleagues have shown, through years of intensive fieldwork, that the very presence of humans has eroded the diversity of chimpanzee behavior. Where we flourish, their cultures shrivel. It is a bitterly ironic thing to learn on the 20th anniversary of Whiten’s classic study.

“It’s amazing to think that just 60 years ago, we knew next to nothing of the behavior of our sister species in the wild,” Whiten says. “But now, just as we are truly getting to know our primate cousins, the actions of humans are closing the window on all we have discovered.”

“Sometimes in the rush to conserve the species, I think we forget about the individuals,” says Cat Hobaiter, a primatologist at the University of St. Andrews. “Each population, each community, even each generation of chimpanzees is unique. An event might only have a small impact on the total population of chimpanzees, but it may wipe out an entire community—an entire culture. No matter what we do to restore habitat or support population growth, we may never be able to restore that culture.”

Since 2010, Kalan has been working on the Pan African Programme, an intensive effort to catalog chimp behavior in 46 sites across the species’ entire range, led by Hjalmar Kühl, Christophe Boesch, and Mimi Arandjelovic. At each site, the team checked whether chimps were carrying out any of 31 different behaviors, including many from Whiten’s original list, and some that had only been recently discovered. “We had things like termite fishing, ant fishing, algae fishing, stone throwing, leaf clipping, using sticks as marrow picks, using caves, bathing, and nut cracking,” Kalan says.

After all this work, the team showed that chimps living in areas most affected by humans were 88 percent less likely to show any one of the 31 behaviors than those living in the most unaffected regions. “However we divided up the data, we got the same very obvious pattern,” Kalan says.

It’s hard to prove a negative, though, and it’s always possible that the chimps were up to their old tricks without the team noticing. But the Pan African Programme team filmed the apes using camera traps, to capture behavior without disturbing the animals. It checked for certain traditions by looking for discarded tools, or checking for specific foods among the apes’ poop. And it scored the chimps generously: Even if it only saw a particular behavior once, it recorded the behavior as being present. If anything, the new results underestimate the extent to which humans suppress chimpanzee cultures.

Such suppression isn’t deliberate. Chimpanzees and other apes learn skills and customs from one another, and those chains of tradition depend on having enough individuals to learn from. So when humans kill chimps for bushmeat, they aren’t just killing individuals—they are also destroying opportunities for the survivors to learn new things. When they fragment the forests in which chimps live, they’re stopping the flow of ideas between populations.

The primatologist Carel van Schaik wrote about these problems in 2002 after studying orangutans, and he predicted then that “major traditional erosion is to be expected in all great apes.” “I realized that testing the hypothesis would be extremely difficult,” van Schaik says, but “thanks to the gargantuan efforts by this team, we have the first data, and they appear to totally confirm the model. It’s a very impressive study.” And it’s worrying, he adds, because many of these cultural behaviors aren’t arbitrary. They’re adaptations, and their loss could push an already endangered species even closer to extinction.

No one knows whether the hemorrhage of chimp culture is getting worse. Few places have tracked chimp behavior over long periods, and those that have are also more likely to have protected their animals from human influence.

And “not all human impacts are the same,” cautions Hobaiter, the University of St. Andrews primatologist. Clearing forests for palm oil is very different from sustainably using a forest as a food source. The Pan African Programme team clumped many indicators of human presence into a single metric, but teasing them apart is important. “Long-term conservation approaches are only going to be effective through the support and leadership of the local communities who live there,” Hobaiter says.

In some cases, the presence of people might create new traditions to replace the ones on the team’s list. In Bossou, Guinea, chimps have started drinking the winethat is fermented on palm trees. In other areas, they’ve taken to raiding human crops. “If you’re getting a lot of energy from high-nutrition human foods, you don’t have to spend half your day breaking nuts,” Kalan says. There’s certainly evidence that chimps can adapt to the presence of humans—but can they innovate quickly enough to compensate for the loss of their old ways?

Even if they can, isn’t that still a tragedy? We care about the loss of our own cultures. We work to document languages that are going extinct. We store old art in museums. We establish heritage sites to protect our cultural and historical treasures. It seems shortsighted—unimaginative, even—to be so concerned with our own traditions, but so blasé about those of our closest cousins, especially when we’ve only just started to appreciate how rich their cultural landscape can be.

Parts of that landscape might be lost before anyone realizes why it exists. In 2016, the Pan African Programme team reported that some West African chimpanzeeshabitually throw stones against the same trees, creating buildups of rocks that are reminiscent of human cairns. No one knows why they do this. “We’re still investigating it,” Kalan says. “And we might be running out of time.”

Other animals are also likely losing their ancestral knowledge at our hands. When poachers kill an elephant matriarch, they also kill her memories of hidden water sources and anti-lion tactics, leaving her family in a more precarious place. When moose and bighorn sheep were exterminated from parts of the U.S., their generations-old awareness of the best migration routes died with them. Relocated individuals, who were meant to replenish the once-lost populations, didn’t know where to go, and so failed to migrate.

These discoveries mean that conservationists need to think about saving species in a completely new way—by preserving animal traditions as well as bodies and genes. “Instead of focusing only on the conservation of genetically based entities like species, we now need to also consider culturally based entities,” says Whiten, who made a similar argument last week in a paper co-written with many scholars of animal cultures.

Kalan and the Pan African Programme team even think that conservationists should recognize places connected with unique traditions as chimpanzee cultural-heritage sites. “When we come across a nut-cracking site that’s been used for many generations, that site is part of the cultural heritage of this one population of chimps,” Kalan says. The same concept might apply to orangutans, whales, and other cultured creatures.

“What we have learned about culture can also be applied to how we conserve animals,” Whiten adds. When people raised endangered whooping cranes in captivity, they had to show the naive birds how to migrate by hopping into ultralight aircraft and showing them the way. “Where animals are to be reintroduced to areas in which they earlier became extinct, we have to make special efforts to reinstate the cultural knowledge they lost,” Whiten says.