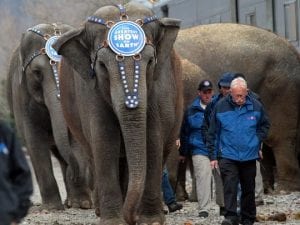 Elephants make their way past The Boathouse along the Ohio River in 2011. (Photo: Provided)

The city already restricts people from owning or displaying wild or potentially dangerous animals. It exempts certain organizations from this rule, including zoos and, until now, circuses.

Councilman Chris Seelbach introduced the ordinance, concerned over what he believes is treatment of the animals.

“In order to stay profitable, circuses must tour so intensely,” said Jon Harmon, Seelbach’s chief of staff. “The moment the show is over animals are returned to their cages, which are so small, and put on a train and are traveling so long that they go out and do the show and go right back into the cage.”

Several states and cities have passed legislation to prevent circuses from using exotic animals in their shows, including New Jersey and Hawaii. California also voted recently to outlaw of circus animals.

Seelbach said his legislation does not ban all circuses from Cincinnati, just the ones that use animals. Cincinnati Circus, a Golf Manor-based entertainment company that features circus acts, does not use animals in their show

Backers of the ban say the circus animals should be treated with the same respect and care as humans.

“These animals are majestic creatures,” said Stacy Adkins, 49, of Corryville. “They’re reduced to nothing more than spectacles. These are living beings that have feelings.”

Councilwoman Amy Murray was the only member to vote no on the ban. Vice Mayor Christopher Smitherman was absent. The new ordinance makes the use of exotic animals in a circus act a misdemeanor in Cincinnati.

UniverSoul, a circus that features performers from various minority groups and promotes cultural diversity, has performed in Cincinnati every year since 1999 and uses exotic animals.  The circus released a their website asking Cincinnati citizens to call council members and ask them to vote no on Seelbach’s ordinance.

“UniverSoul Circus animal acts have top tier caretakers and trainers, are regularly examined by several independent licensed veterinarians, seen by multiple animal health & welfare inspectors, meet the requirements of dozens of city, county and state agencies across the country, and are properly licensed by the United States Department of Agriculture (USDA),” the statement said.