Wildlife criminals had better watch out! The same software that recognises you in a friend’s social media post is being adapted to tackle the illegal trade in chimpanzees.

The amber eyes in the image above belong to Manno, who was trafficked from Africa to Syria before being rescued.

Pictures of Mano are now being used to train the algorithm that could help save members of his endangered species from the same experience. It’s a first for chimpanzee conservation.

The algorithm will search through photo posts on social media looking for the faces of rescued apes.

If the technology recognises a trafficked animal, the owners of the accounts featuring the chimp can then be targeted by the authorities. 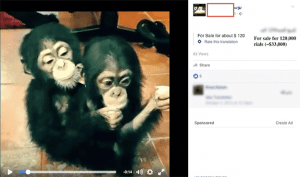 These might be the smugglers who originally advertised the ape or a foolish buyer who subsequently showed off their purchase.

The hope is this new initiative can help break up criminal networks.

How did this project start?

The idea came to conservationist Alexandra Russo when she was investigating online ape trafficking and sifting through posts on Instagram and Facebook for evidence of chimpanzees being offered for sale.

“We were spending more and more time looking through the depths of the internet; it’s like a rabbit hole. You don’t know where to look, you click around pretty aimlessly until you start to find things that look suspicious. So, I thought there must be a more efficient way to do this,” she explains.

“I began discussing the possibility of using some kind of software that could automatically find ape faces in online searches.” 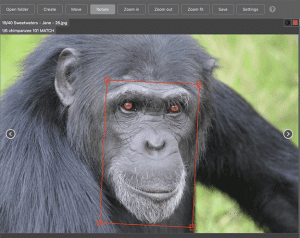 How does the technology work?

It first detects that the image shows a chimpanzee and then determines the individual.

“We train the algorithm to recognise individual chimps using up to 30 photos of an individual, adapting it to the chimp’s facial structures,” explains Dr Colin McCormick.

Processing time is quick, under a second, but takes longer as more images are added to improve accuracy.

“It is important to get images of each individual in different positions, facial expressions, in altered lighting, and with the head tilted at a different angle,” explains Alexandra.

The algorithm technology is being trained using a database of 3,000 ape face images.

In each of these pictures, a box is drawn around the chimp’s face and then matched with existing images in the ever expanding photo database. 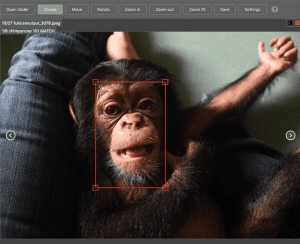 Nine chimpanzee conservation organisations have contributed pictures – from the Great Ape project in Brazil to Project Primate International in Guinea.

“They send us images of known named apes so we can build the individual recognition algorithm, but the fact that chimpanzee faces are so close to human faces creates a harder technical challenge,” Dr McCormick says.

Chimpanzees share an estimated 98% of their genes with humans, which means that “the facial algorithms have to be really good at distinguishing human faces online from chimpanzees, unlike with elephants or tigers”.

What do conservationists say?

“Smart camera traps equipped with an AI face-recognition algorithm could be a powerful tool in the hands of researchers and conservation practitioners on the ground in Africa,” says Lilian Pintea from the The Jane Goodall Institute, which has contributed to the image database with photos from their Tchimpounga Chimpanzee Rehabilitation Centre in the Republic of Congo.

“This kind of tech will help trace these large-scale criminal networks and expedite rescues. At border points, for example, if you had the app on your phone, you could quickly look up the chimp and chart the trafficking routes,” says Jenny Desmond, Co-founder of Liberia Chimpanzee Rescue and Protection.

“Every day I get sent an image of another chimp, posts from China, Easter Europe all over – but there’s no way of tracking it effectively until now.” 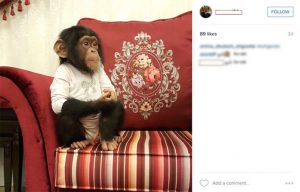 How will the project develop?

Dan Stiles from the PEGAS Project to End Great Ape Slavery comments: “Facebook and Instagram have started closing wildlife trafficker accounts, so it’s a game of whack-a-mole to try to prevent online sales.” Dan has worked with Alexandra to investigate online ape sales.

An estimated 3,000 great apes, two-thirds of which are chimpanzees, are lost from the wild every year as a result of the illegal trade, according to the UN Environment Programme.

“We want to integrate the tool into other rescue organisations to then scale up and out so we can start to really wrap our heads around these large-scale trade networks,” Alexandra says.

The aim is to provide a streamlined platform for authorities from the local police to the Transnational Crime Unit and Interpol.

Alexandra hopes to deploy the tool to track the movement of chimps live online after the current rounds of fundraising.

“We’re looking to partner with social media companies who could incorporate ChimpFace into their crime monitoring. Then, we could put a big dent in wildlife trafficking,” she says.

“Technology is our enemy in the ways it has made it easier for chimps to be trafficked online but it is also our ally in tackling this crime where it lives,” Jenny Desmond observed.