How AI is helping track the growing monkey population in India

Microsoft – On the Issues

Imagine your life being constantly disrupted by monkeys. Every day, growing in confidence and numbers, they come into your home or place of work, looking for food, creating a mess and sometimes becoming aggressive.

For many people in India, this is an all too familiar occurrence.

So, what would you do? One researcher, through a Microsoft AI for Earth grant, is using artificial intelligence (AI), cloud computing and her passion for the animal kingdom to help solve the problem.

“I am a big-time animal lover,” says Ankita Shukla of the Indraprastha Institute of Information Technology (IIIT) in Delhi. “Ever since childhood, I’ve just felt a bond with animals. As a child, I would rescue cats and dogs that were living on the streets.”

Shukla has since undertaken a research career developing machine-learning and deep-learning algorithms. But that desire to care for animals has stayed with her, and it has led to an innovative approach to addressing the problems that occur when people live side by side with monkeys.

Stories about antisocial simians in India abound in the press. In one memorable example, a monkey stole a pile of money from a house, climbed a nearby tree and threw handfuls of cash to grateful citizens below.

But not all tales of primates behaving badly are quite so amusing.

People across India suffer around 1,000 monkey-bite injuries every day. The animals steal food and anything else they can get their hands on – a­nd they can cause devastating damage to property.

As towns and cities grow, they often expand into territories that were once the exclusive domain of wild animals. For some creatures, the result is displacement, which can lead to population collapse. However, for India’s monkeys, it has opened the door to a life of plenty.

Rather than spending their days foraging while keeping watch for predators, they now have an abundance of meal options – leftovers, discarded food and the contents of people’s homes and businesses. With easy access to all that nourishment and thus more time on their hands, it’s no surprise India’s urban monkey populations are on the rise. 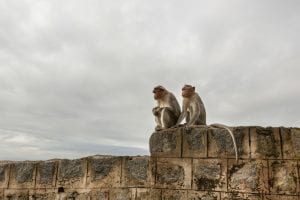 ‘Is John in our database?’

Shukla has helped put together a project to make humane population-control methods more focused and effective, weaving together AI tools, machine learning and Microsoft Azure to record and recognize individual monkeys. That data is then combined with projects to administer contraception or carry out sterilization procedures.

Although there’s more to the project than simply collecting photos of monkeys, step one involves encouraging the Delhi public to get out there and take pictures of their simian neighbors. “Let’s say we have been sent an image of a monkey,” says Shukla. “We’ll call him John. First, we need to know if we’ve seen him before – is John in our database? If you have two images, you need to know if you’re looking at two photos of John or two different individuals. You also need to know if they are already in the system: Yes, that’s John. We encountered him once before, maybe 20 miles away.”

The inclusion of geolocation data allows the researchers to see the nature of a particular troops’ travels across a given area. That can prove useful in detecting population displacements, which might lead to an increase in conflict between humans and monkeys.

“I started my Ph.D. studies in the area of machine learning for computer vision applications,” says Shukla.

Essentially, that involves working with large sets of image data. Thanks to her background in process optimization and mathematical modelling, she was soon drawn further into the world of AI.

“I was working on tiger identification to begin with, and then in 2017 started work on primate species identification,” says Shukia. “The idea was that we would undertake facial recognition of these non-human primate species, in particular, the rhesus macaque, which is the species causing a lot of the problems.”

At the moment, her project is working with a dataset of around 4,000 images of 93 monkeys – that’s small enough to be processed manually while training the algorithm to recognize individual faces.

However, many more images will be needed to cover the variety of the vast monkey population, more than can be undertaken manually with reasonable time and effort. That’s a task better suited for powerful cloud computing resources. Once a larger dataset has been gathered, the processing will take place on the Microsoft cloud platform.

A mobile app is also being developed that will make it possible for the public to take photos of monkeys, tag their location and upload them directly to the project’s database. Researchers from the IIIT and Delhi’s team of animal control officers would then be able to identify and locate monkeys that require sterilization.

It’s a safer, less stressful alternative to physically tagging the monkeys. And, perhaps by getting the public involved, the project will also help people form bonds with the animals with whom they share their streets.