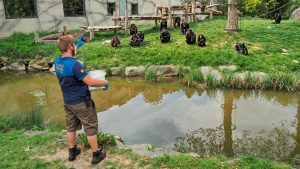 The International Union for Conservation of Nature recommends photographs, like this, show a clear barrier and safe distance between primates and people. GUILLAUME SOUVANT/AFP VIA GETTY IMAGES

The global authority on wildlife protection wants scientists to quit cuddling monkeys on Instagram, holding hands with orangutans in films, and palling around with chimpanzees in publicity photos. In a new set of guidelines released last week, the International Union for Conservation of Nature (IUCN) called on scientists, students, conservationists, and caretakers to stop publishing images that depict themselves in close contact with nonhuman primates.

For years, conservationists have campaigned against movies, ads, and social media posts that portray primates as appealing pets. “There is a causal link between how primates are depicted and whether they survive as wild animals, or [whether] people do terrible things and try to make them pets,” says Duke University anthropologist Brian Hare, who did not work on the guidelines, but called them welcome and “needed.”

Primatologist Siân Waters of Durham University and others grew frustrated by colleagues posing with their study subjects on book jackets, in research talks, and on social media. About 2 years ago, they founded a group within IUCN, the Primate Specialist Group Section for Human-Primate Interactions. Among their first agenda items: establishing best practice guidelines for photographs or videos featuring nonhuman primates.

To do so, they first reviewed experiments by Hare and others that demonstrated the damage wrought by certain kinds of primate images. For example, people who watched commercials with chimpanzees in human settings, like an office, were more likely to think chimps make fine pets, and were less concerned about their conservation status. Other studies have documented real world correlations: After videos of people playing with primates went viral, there was an uptick in social media posts from users longing for their own primate pets.

Especially on social media, such images can rapidly spread without context, fueling public misconceptions that primates are pets, playmates, and photo props. When people see experts touching primates, they also want to get close to them, say the guidelines’ authors. That’s dangerous for people, who might get bitten, mauled, or infected. And it’s also “a significant threat to the survival of primates,” Hare says.

By the latest counts, some 60% of primate species are facing extinction, including most lemurs and all great apes—chimpanzees, gorillas, and orangutans. After habitat loss, poaching is a leading cause of dwindling primate numbers. The United Nations estimated in 2013 that illegal trade causes nearly 3000 great ape deaths per year, or roughly 1% of their total population.

“Maybe 30, 40 years ago a primatologist would think it was really cool to have their picture taken with their study subject,” says group member Janette Wallis, director of the Kasokwa-Kityedo Forest Project. “Today we do not think that’s cool. It’s one of those things where time teaches us about what’s safe, what’s important, what’s responsible.”

The new guidelines suggest photographs include a clear physical barrier or at least 7 meters between people and primates. Humans should not be shown cradling, hand feeding, or playing with the animals. Further, photos should include scientific gear like face masks, binoculars, and notepads to communicate the professional nature of primate research and care. And the list asks “high-profile” people, who’ve already posed in close encounters, to make public statements explaining why their old images are unethical.

The Jane Goodall Institute adopted similar guidelines last year, and has since tried to eliminate or add disclaimers to photos snapped decades ago, which show Goodall close to chimpanzees. “Over 6 decades our thinking has evolved,” says Shawn Sweeney, associate vice president of communications and policy for the institute. “We don’t want to continue normalizing that it’s OK to come in contact with these animals.” He adds that he and colleagues are glad to see the issue being taken up in an international forum.

But that could present a problem for sanctuaries and other nonprofit organizations that rely on public donations. There are more than 100 primate sanctuaries worldwide; many get the bulk of their revenue from contributions, gifts, and grants. Their promotional videos and photos often show orphaned primates being rescued and rehabilitated by staff. That evocative imagery is a “double-edged sword,” for conservation, Hare says. It tends to attract donors, which organizations need to protect primates in nature and care for ones already in rescue sanctuaries. But it also leads people to think primates make suitable pets.

Even if some organizations lag in adopting the guidelines, they should make individual researchers and caretakers think twice about their own social media, says Marni LaFleur, a primatologist at the University of California, San Diego, who contributed to the new rules. “I really hope that people will value the well-being of these animals more than they value getting ‘likes.’”