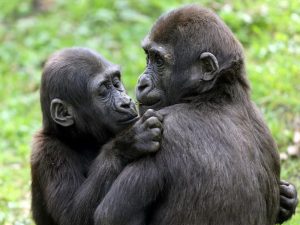 Lowland gorillas Jamila (L) and Suwedi cuddle in their enclosure at the zoo in Duisburg, western Germany. Roland Weihrauch/DPA/AFP via Getty Images

Animals are … candid. It’s part of why we love them. If they’re hungry, they’ll roar, growl or bark. If they itch, even in a most intimate and inaccessible spot, they’ll scratch.

We have a dog who gets so excited about people, she relieves herself on the floor. Do we wish Daisy were more subtle in her delight? I suppose. But animals reveal what they feel without apology or restraint.

Among all the urgent news stories this week, it was cheering to read an account from Emma Bryce on Live Science that said: animals hug. For comfort, reassurance and warmth.

Zanna Clay, a primatologist at Durham University in the U.K., told LiveScience about bonobos who have been orphaned by hunting and now live at a sanctuary in the Democratic Republic of Congo.

She says a bonobo in distress will reach out its arms for another bonobo, “and sort of ask for help.”

Young orangutans hug each other when they see snakes. Wouldn’t you? And chimpanzees, Zanna Clay told Live Science, will hold onto one another when they’re frightened, say by a growling predator, or after 45 minutes on hold with an internet service provider.

Crested black macaques call out for hugs by smacking their lips loudly. I had an uncle who did that.

And spider monkeys, according to the report, even hug each other to keep disagreements from sharpening into conflicts. Like two mafia dons in a Martin Scorsese film who throw their arms around each other to declare a truce.

Maybe Ted Cruz should have hugged Big Bird before he criticized him. That’s a hug that would have gone viral.

And hugs are not just the province of primates. Horses groom each other — it lowers their heart rate — as do prairie voles. Dolphins apparently console one another with flipper rubs.

It’s tempting to see all the hugs, rubs and lip smacks among animals as something they share with us humans. But there’s a critical difference: The animals mean it.

Human hugs, says Zanna Clay, have “become a kind of conventionalized greeting or parting gesture. Apes don’t tend to do that.”

In the holiday season just ahead, many of us feel a need for hugs after so many months of separation. But even if you’re fully vaccinated AND boosted, please, for the love of Mama Stamberg’s cranberry relish, don’t hug a bonobo.