Findings may provide clues to origins of human artistic ability 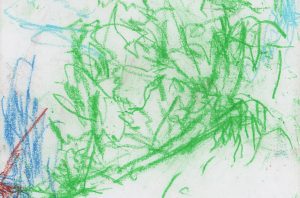 Molly, a captive orangutan in Japan, made more than 1000 drawings in the space of 5 years. She often drew intricately curved lines and shapes, and liked to use green in her summer drawings, as shown here.TAMA ZOO

She may not be Rembrandt or Pablo Picasso, but Molly the orangutan drew more than 1000 pictures over her lifetime. Now, one of the largest studies of nonhuman primate drawings to date—including hundreds of works by Molly and her ape companions at a Japanese zoo-reveal distinct individual differences in styles and ability. Some of the pictures appeared to change with the season, perhaps indicative of an orangutan’s mood.

The research shows the primates’ “productions are not totally random,” and vary among individuals more than previously realized, says Lison Martinet, an ethologist at the Hubert Curien Pluridisciplinary Institute, who was not involved with the study. The findings, she says, could help scientists identify the mental underpinnings of our own artistic abilities.

The study was sparked when Cédric Sueur, a primatologist at the University Institute of France, watched his young daughter drawing. She was scribbling with intention, he says, “as if it had meaning.” Was this also possible for nonhuman primates?

Sueur knew animals in zoos and sanctuaries are sometimes offered tools to paint and draw with as part of enrichment programs, although there is no evidence they do this in the wild. Then he learned about five female Bornean orangutans (Pongo pygmaeus) at the Tama Zoological Park in Japan, where caretakers regularly provided whiteboards and crayons. From 2006 to 2016, the workers collected 1433 drawings made by the orangutans—most (1299) drawn by Molly, who had been captured in the wild in 1952. She was 54 when she began to draw, and was housed separately from the other orangutans, although she could see them; she died in 2011.

From the caretakers’ records, the scientists know Molly “took time to draw,” Sueur says. “The others would finish their compositions very quickly, but she would work on hers for an hour or more at a time,” suggesting she regarded the activity differently from her fellow apes. After finishing their drawings, the orangutans simply dropped them to the floor or tore them up. They were free to begin a new one, but most never drew more than two per day.

In the new study, Sueur and his colleagues statistically analyzed 790 of the orangutans’ drawings. They examined the amount of the canvas covered, the shapes drawn, and the colors used. They also separately analyzed 656 randomly selected drawings done by Molly, to see whether and how they changed over time.

The scientists discovered stark individual differences in the apes’ color preferences, how strongly they pressed on the crayons, and how much of each board they covered—reflecting differences in “personality, motivation, and cognitive abilities,” the team suggests this month in Animals. 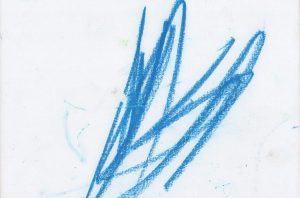 Ten-year-old Kiki’s drawings were like those of human toddlers: hard, bright scribbles in the center of the page.TAMA ZOO

Molly, for instance, pressed lightly with her crayons, so her drawings were often softer than those of 10-year-old Kiki’s, which were especially vivid (left). As she aged, Molly drew with fewer colors, covered less of the sheet, and drew farther from its center—changes that may have been due to increasing physical limitations, such as becoming blind in her left eye. Yet she still created more “complex drawings,” making a greater variety of strokes than any of the others, Sueur notes. Her drawings also changed with time and her experiences. She favored purple for drawings she made in the spring, for example, green for summer and winter, and red when another orangutan was giving birth (below). 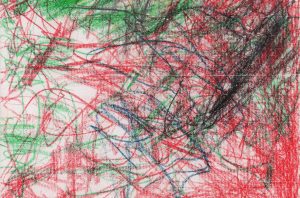 Molly’s “birth” drawing. She didn’t witness the birth, but could smell the blood.TAMA ZOO

Do these captive, scribbling orangutans help us understand what motivated our early human ancestors to decorate rock walls with elaborate paintings? That’s the hope, says Marina Vancatova, a primatologist at Charles University who wasn’t involved with the study. Much of the earliest prehistoric art (whether carved statues or cave paintings) is sophisticated, she points out. And so “we can only speculate about what kind of art was there before”—although hashtag scratchings—from South Africa and dating to some 70,000 years ago provide some hints.

If nothing else, says emeritus primatologist Frans de Waal of Emory University, the study shows the animals aren’t painting because they have to. They appear to be doing it because, like many humans, “they enjoy it.”