Primates living in the wild have to contend with many threats to their well-being: those that are naturally occurring (like predators and disease) and others that are man-made (like encroaching human populations and pollution). One increasingly alarming threat to wild primates is something that currently exists in about half of the products you rely on every day.

It is in your shampoo and margarine, your ice cream and your face wash. It is hidden in upscale “green” brands as well as the junkiest of preservative-laden snack cakes. It may cower behind complex scientific names like Cetyl Palmitate or Elaeis Guineensis, and many people may mistakenly think that it is not environmentally harmful due to it being GMO free, natural and non-toxic. 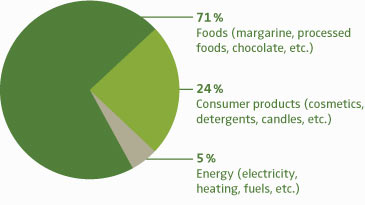 Regardless of what it is called or how attractively it is presented, the ingredient of concern is palm oil – and whether or not you like it, palm oil is in the vast majority of the products you use daily. It is also responsible for a frightening amount of devastation and conflict with primate species…with seemingly little end in sight.

Palm oil is derived from the fast growing African oil palm tree that flourishes in the warm climates throughout Asia and Africa, although 85% of all palm oil currently comes from Indonesia and Malaysia. Palm oil crops are easy to grow and in demand more than ever before, leading to increasing numbers of farmers who convert their lands to palm plantations.

Palm oil’s destruction is directly related to the acres of natural forest that are transformed for palm production, obliterating the native flora, fauna and biodiversity required for many species to avoid extinction. The Ivory Coast, for example, lost 90% of its chimp population in just 17 years due to rampantly expanding palm plantations. According to the World Wildlife Fund, the equivalent of 300 football fields of rainforest are cleared every hour, all to feed the world’s thirst for more palm.

The indirect pains of palm oil come in the form of even more land clearance for roads for logging trucks and the populations of people that follow jobs on palm plantations. Incidences of wildlife smuggling, labor violations, upheaval of native tribes, pollution and resulting climate change follow suit.

The animal that is most affected by this explosion of palm oil use is the orangutan. The species’ native habitat is on the islands of Borneo and Sumatra – which happens to be the target of palm plantations. Over 90% of their wild home has been destroyed in the last two decades, causing the United Nations to declare the situation a “conservation emergency”. It is estimated that there are only 60,000 orangutans left in the wild. Their native environment (which was already threatened by human population growth and other deforestation causes) is quickly disappearing. This leaves no land to support the lives of these intelligent, quiet beings.

As palm plantations encroach on orangutan populations, conflict with humans is imminent. A quick profit can be turned by illegally capturing and then selling orangutans. Local people who normally live in poverty may find the allure of such easy money irresistible (or necessary to feed their families) and thus exotic animal trade on the black market rises as well.

It’s not just the orangutans who are suffering. Tigers, rhinoceros, bears, leopards and proboscis monkeys are also indigenous on the lands that are most conducive and desirable for palm oil plantations. The population numbers of these species are similarly declining.

Although the movement for sustainable palm oil has been offered up as a solution, it has been criticized as little more than a green-washed plot intended to give the public a false sense of relief. The largest effort put forth on behalf of sustainable palm solutions appears to be the Roundtable on Sustainable Palm Oil (RSPO), which certifies manufacturers using palm oil from more environmentally friendly sources. However, critics of the RSPO cite the group for not truly preventing all palm damage, as it only protects more highly valued land for conservation, while ignoring the secondary forested areas and peat lands. Some activist groups are calling for a ban on all palm oil from Borneo and Sumatra, as the areas are so vital to orangutans that any palm production, however little, negatively affects the area’s precious few remaining primate individuals.

Although some large corporate consumers of palm oil have reconsidered its usage due to public outcry (like Yum! Brands, parent of companies like KFC and Pizza Hut, which announced in 2012 that it would, “wherever feasible”, phase out palm oil from it’s 39,000 restaurants), others appear reluctant. One of the giants of palm oil use, Proctor & Gamble (P&G), has so far failed to meet its promises to use more responsibly sourced palm oil by 2015. In response, Greenpeace recently unveiled data showing directly how P&G products can be followed down the chain to irresponsible and harmful deforestation.

The changes made by Yum! Brands and the scrutiny that has rained down upon P&G give credence to the power of the consumer. Increasing public awareness of palm oil's effect on natural ecosystems is the only way to slow its production and potentially save the orangutans – and their forest home – before it is too late. 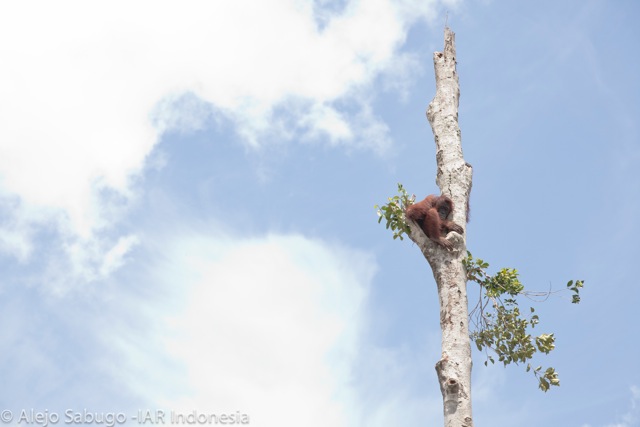 All other images courtesy Rainforest-rescue.org