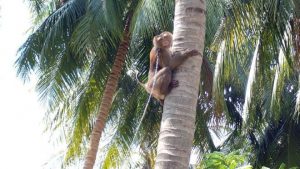 A number of supermarkets have removed some coconut water and oil from their shelves after it emerged the products were made with fruit picked by monkeys.

The monkeys are snatched from the wild and trained to pick up to 1,000 coconuts a day, People for the Ethical Treatment of Animals (Peta) said.

In response Waitrose, Ocado, Co-op and Boots vowed to stop selling some goods.

Meanwhile, Morrisons said it had already removed products made with monkey-picked coconuts from its shelves.

In a statement, Waitrose said: “As part of our animal welfare policy, we have committed to never knowingly sell any products sourced from monkey labour.”

Co-op said: “As an ethical retailer, we do not permit the use of monkey labour to source ingredients for our products.”

In a tweet earlier on Friday, the prime minister’s fiancée Carrie Symonds, a conservationist, called on all supermarkets to boycott the products.

Sainsbury’s subsequently told the BBC: “We are actively reviewing our ranges and investigating this complex issue with our suppliers.”

Asda said: “We expect our suppliers to uphold the highest production standards at all times and we will not tolerate any forms of animal abuse in our supply chain.” It pledged to remove certain brands from its shelves until it has investigated the allegations of cruelty.

Ms Symonds later took to Twitter again to urge Tesco to make a similar pledge: “Come on @Tesco! Over to you! Please stop selling these products too,” she wrote.

A Tesco spokesperson told the BBC: “Our own-brand coconut milk and coconut water does not use monkey labour in its production and we don’t sell any of the branded products identified by Peta.

“We don’t tolerate these practices and would remove any product from sale that is known to have used monkey labour during its production.”

Peta said it had found eight farms in Thailand where monkeys were forced to pick coconuts for export around the world.

Male monkeys are able to pick up to 1,000 coconuts a day, Peta says. It’s thought that a human can pick about 80.

It said it also discovered “monkey schools”, where the animals were trained to pick fruit, as well as ride bikes or play basketball for the entertainment of tourists.

“The animals at these facilities – many of whom are illegally captured as babies – displayed stereotypic behaviour indicative of extreme stress,” Peta said. 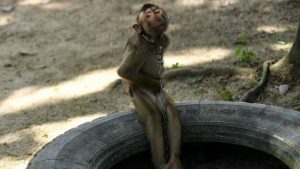 “Monkeys were chained to old tyres or confined to cages that were barely large enough for them to turn around in.”

“One monkey in a cage on a lorry bed was seen frantically shaking the cage bars in a futile attempt to escape, and a screaming monkey on a rope desperately tried to run away from a handler.”

In one case, the organisation was told that monkeys would have their canine teeth pulled out if they tried to bite handlers.

“These curious, highly intelligent animals are denied psychological stimulation, companionship, freedom, and everything else that would make their lives worth living, all so that they can be used to gather coconuts,” said Peta director Elisa Allen.

“Peta is calling on decent people never to support the use of monkey labour by shunning coconut products from Thailand.”