“Theory of Mind”: A 41-year-old question about ape intelligence may finally be answered 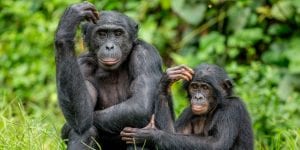 Great apes appear to have “theory of mind,” and know when a human is being fooled by another ape.

Scientists can’t agree on the intelligence of our primate relatives, but new evidence has just bumped up our ape brothers and sisters a few points.

Research published Monday in the academic journal Proceedings of the National Academy of Sciences suggests that great apes — chimpanzees, bonobos, orangutans, and gorillas — may have a stronger understanding of their minds and the minds of others than scientists ever suspected.

In a paper on their research, an international team of scientists present evidence that great apes possess the “theory of mind,” which means they can attribute mental states to themselves and others, and they can also understand that others may believe different information than they do.

Scientists have long wondered if the chimpanzee has a “theory of mind,” with the first study on it being published in December 1978, some 41 years ago. It appears we now have the answer.

In the latest experiment, researchers observed that great apes can grasp when someone else believes information that is untrue, which supports the long-debated notion that a non-human animal can possess theory of mind.

“Our results suggest that great apes used their own past perceptual experiences to determine an agent’s perceptual access and anticipate how the agent would behave,” write the study’s authors, led by Fumihiro Kano, Ph.D., a comparative psychologist at Kyoto University’s Kumamoto Sanctuary in Japan. 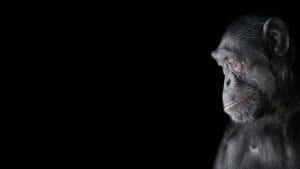 Chimpanzees, bonobos, and orangutans showed that they know when someone else has an untrue belief.

How scientists learned apes have “theory of mind”

To test how apes use their past experiences to determine how another “agent” will behave, Kano’s team developed a slightly complicated experiment for 47 apes — 29 chimpanzees (Pan troglodytes), 14 bonobos (Pan paniscus), and 4 orangutans (Pongo abelii).

In the experiment, shown in the figure below, a human actor dressed as an ape nicknamed “Kong” hid an object beneath one of two identical boxes while an un-costumed actor watched (frame A). Then one actor went behind a barrier (B), while Kong returned to the boxes and switched the object from the first box (the “target”) to the other (the “distractor”) before removing it altogether (C). The other actor then returned and reached ambiguously (D), holding their hand between the boxes for 6 seconds before choosing one.

This was the moment of truth, when scientists tracked which box the apes looked at first and which one they focused on the most. 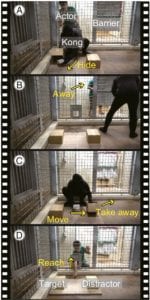 This elaborate experiment may seem confusing, but for the apes watching this whole thing go down, it made perfect sense. You see, half of them thought the barrier the actor hid behind was see-through, while half thought it was opaque. Before watching the experiment, half had been shown a translucent barrier, and half had been shown an opaque one. But when watching the experiment, the barrier was too far away to tell which one it was, so the chimps, bonobos, and orangutans used their past experiences with the barrier to guess what the human knew.

For the apes who thought the barrier was opaque, eye-tracking software showed that they looked significantly longer at the target box than the distractor box, even though there was nothing in either one.

The researchers conclude that even though the apes knew there was nothing in either box, they assumed the human didn’t know this and would search in the last place they had seen Kong put the object. So their gaze fell on the target box while the human hovered their hand between the two.

“Apes who had experienced the barrier as opaque treated the actor as not having seen the object’s movement and removal and as having a false belief that the object remained in its original location: They showed a bias in looking toward the location the object originally inhabited, consistent with anticipation that the actor would search for the object there,” the team writes.

“Apes who had experienced the barrier as translucent showed no such bias, consistent with attributing to the actor a true belief that the object had been removed and with having no expectation that the actor would search in any particular place.”

In short, even though the apes knew the truth about where the object was hidden, they seemed to understand that someone else might not know that and therefore might act on incorrect information.

“These results together corroborate the idea that … nonhuman animals have a theory of mind and do not simply rely on behavior rules to interpret and anticipate others’ actions,” they write.

Is the debate settled? Not yet. But this study does put one more point up on the great ape intelligence scoreboard.