‘Tiger King’ Is a Wild Ride. And Largely Misleading.

‘Tiger King’ Is a Wild Ride. And Largely Misleading. 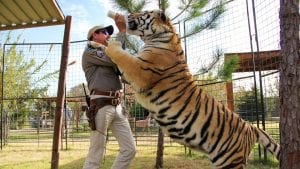 Five minutes into the first episode of Netflix’s viral documentary series Tiger King: Murder, Mayhem, and Madness, its codirector, Eric Goode, encounters a newly purchased snow leopard in the back of a van, suffering in the Florida heat. “That set me on this journey to really understand what is going on with people keeping big cats in this country,” Goode says in the series’ only narration. It’s a moment of feline sympathy that launches the show and sends Goode on a five-year quest to document Big Tiger—a cat-sprayed industry of breeders, traffickers, and wealthy narcissists exhibiting wild animals across the United States. The bigger the ego, the bigger the cat.

Goode, a somewhat well-known conservationist and entrepreneur, should be a natural fit for this series: he founded the Turtle Conservancy, an environmental nonprofit, in addition to creating and designing several nightclubs and hotels, including the Bowery Hotel in New York City. Unfortunately, Goode brings to Tiger King the intellectual rigor and social responsibility of… a nightclub and hotel developer. Don’t get me wrong, Tiger King is as fun as shootin’ up a stop sign. But the scene with the leopard in the van is the only indication in the five-hour series that anyone behind the camera gives half a litter box about wildlife. Instead, it selectively leaves out information to craft a narrative that entertains at the expense of both the cats and the actual earthbound truth.

I’m not a big-cat person. My familiarity with this world comes from the several months I spent last year producing and editing a podcast series called Cat People with reporter Rachel Nuwer. In the series, we explore and try to explain America’s tiger problem, including two episodes that cover much of the same ground as Tiger King. And while Cat People is a work of journalism that goes in a very different direction with the material than the quarantine-fueled supernova of mass entertainment that is Tiger King, the docuseries skims over or entirely leaves out the context viewers need to understand anything tiger related.

Tiger King looks at three organizations, each with its own charismatic figurehead. Joe “Exotic” Maldonado-Passage runs the GW Exotic Animal Park in Oklahoma, Bhagavan “Doc” Antle founded The Institute for Greatly Endangered and Rare Species(TIGER) in South Carolina, and Carole Baskin operates Big Cat Rescue in Florida. Tiger King would have you believe that all three facilities and their owners are versions of the same thing—egomaniacs who get off on owning wild animals and then selling that feeling of power and primal connection to the public. The show presents Joe Exotic as honest in his dishonesty, Doc Antle as a con man maintaining plausible deniability, and Carole Baskin as a hypocrite, having fooled her followers (and maybe herself) into believing that she’s somehow different than the other two. It glosses over the fact that her facility is, in most ways, fundamentally different.

You know why there are more tigers in captivity than in the wild? Because the general public will pay huge amounts of money to play with a tiny tiger cub for a few minutes. But tigers only stay tiny for a few weeks, so to maintain their supply, breeders like Joe Exotic and Doc Antle, as the series shows, churn out cubs for their petting operations and then unload them when the felines grow up, start chomping on customers, and develop a $10,000-a-year meat habit.

What Tiger King largely brushes aside is that Big Cat Rescue, on the other hand, only accepts animals confiscated by law enforcement or from owners who are trying to get rid of them. The series quickly skims over the fact that these cats are almost always adults and that the sanctuary forbids petting—if a staff member or volunteer touches an animal for any reason, they’re fired and never allowed to return. Finally, Big Cat Rescue will only take animals if the owners sign a contract declaring that they’ll never own, or even have a photo taken,with another big cat. If they violate the contract, there are financial penalties. The docuseries doesn’t mention this at all.

The Baskins aren’t just rescuing big cats, they’re also working on the problem at its source. The biggest threat to tigers’ survival around the world is habitat loss and poaching. When American diplomats try to push other countries to address their high levels of poaching, however, they’re basically laughed at and told to clean up their own problem first. The Baskins are trying to do exactly that. In 2003, they helped pass a bill making it illegal for owners and breeders to sell big cats as pets across state lines. Then, in 2016, they were part of a collection of environmental groups that convinced the U.S. Fish and Wildlife Service to close a loophole that allowed licensees like Joe Exotic and Doc Antle to sell big cats to each other. The Baskins’ latest lobbying effort is a bipartisan piece of legislation called the Big Cat Public Safety Act, which Tiger King briefly mentions before going back to more salacious material. It would ban all cub petting and exotic-animal encounters, including for hybrids like ligers and tiligers, effectively shutting down the mechanism that drives the tiger industry.

Instead of making this basic difference clear, the series paints Carole as greedy and manipulative, and it portrays her followers and contributors as having been suckered. Yes, she is uncomfortably cat obsessed. Yes, her organization’s music videos are pretty cringey. And it’s true that no one knows what happened to her second husband, Don Lewis, which Tiger King revels in for a whole episode. But it’s also true that all the fact-checked pieces of journalism about Carole Baskin (and quite a few have been published) end there—no one knows. Tiger King,on the other hand, gives a megaphone to the conjecture that Carole killed her husband and fed him to the tigers. The backlash to that conjecture? It defames her, of course, but it also limits her and her husband’s ability to do big-picture conservation work. It hurts the cats. 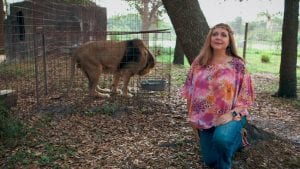 Let’s jump back to the breeders for a second, though, because that’s where Tiger King really drops the ball. The show gives voice to the idea that breeders are helping wildlife by increasing their numbers. “We’re makin’ more of ’em,” Joe says. This is one of the most common arguments you hear from tiger owners and breeders. It’s also intellectually dishonest, and the fact the series does not give anyone a chance to correct it in the documentary is irresponsible. Virtually all privately owned tigers in the U.S. are mutts who do not belong to any of the six distinct subspecies found in the wild and therefore are genetically useless to conservation efforts. The show lets Joe and others suggest that if it looks like a tiger, it must be a tiger, never bothering to point out that that’s not actually the case. Tony the Tiger would do better in the wild. At least he wouldn’t muddy wild genes.

These choices add up to a show that becomes propaganda for its own binge-worthy thesis: the whole industry is petty and shallow, to the point that none of these people who have devoted their lives to big cats actually care about animals. It’s good TV. It’s just not true.

Goode has stopped doing interviews about Tiger King, but he expressed some regret to Vanity Fair last month that the series wasn’t more focused on the animals. “Netflix is very adept at making binge-worthy television,” he said. Tiger King was supposed to be Blackfish for cats. Goode told his subjects he was making a film focused on environmental problems. He ended up with something that may actually be a step backward for tiger conservation in the United States.