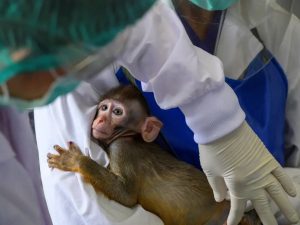 Exclusive: Numbers could be increased to 30,000 a year as Covid pandemic intensifies worldwide demand for lab animals, writes Jane Dalton

A plan to build a centre breeding 10,000 monkeys a year for medical research will mean the “industrial-scale farming” of non-human primates, animal-protectionists are warning.

An animal-research company wants to build a multi-million-dollar hub in Texas that is expected to become America’s largest monkey-breeding base.

Numbers could even be scaled up in the future to 30,000 a year, bosses say.

The plans are being drawn up because China – the main supplier until now of primates to US laboratories – has banned the export of macaques because of the coronavirus.

The animals would be used in laboratory tests, including research for Covid-19, Sars, Zika and other deadly viruses.

The proposal, by research giant Envigo and seen by The Independent, says there is a worldwide shortage of monkeys for experiments, with global demand exceeding supply, and the shortfall has been exacerbated by the pandemic.

Just when US researchers want to carry out more tests than ever – for Covid treatments – China is keeping more of its own primates for medical testing to “not only boost China’s economic engine, but to also establish itself as the global scientific leader”, the document says.

Headed A Proposal to Alleviate the Critical Primate Supply Chain Risk and its Adverse Impact on US Research, the document estimates that replacing all the 30,000 primates a year used by US scientists would cost about $500m and take up to 10 years to build up production.

But the company says it could “meaningfully secure vital supplies” of the animals for US scientists by building a centre breeding about 10,000 animals a year.

This would cost about $170m (£125m) and take five years “to reach full production”. The hub would employ 160 scientists, animal technicians and other workers.

Company bosses argue it would also be a stimulus to the economy in Texas, where Envigo already has a 200-acre base.

“A choice could be made later as to whether to scale-up to fully meet the US needs domestically,” the proposal states.

The US already has seven regional centres, funded by the National Institutes of Health (NIH), that breed tens of thousands of primates for research, but nonetheless the country is still thought to be the world’s largest importer of the animals for lab experiments and breeding colonies.

According to the latest available figures, in 2018 the US imported nearly 39,000 primates, including 28,848 macaques from China, 6,412 from Cambodia, 2,649 from Mauritius and more than 1,000 other monkeys from other countries including St Kitts.

That year, 70,797 non-human primates were used in US research.

Envigo, which has three UK centres, including in Cambridgeshire, was formed when Huntingdon Life Sciences merged with other companies. It supplies animals and carries out tests on them for pharmaceutical and chemical companies, as well as universities, governments and other organisations.

Primate-welfare group Action for Primates condemned the breeding-centre plan as a “backward step” and questioned whether experiments on monkeys were safe and necessary.

Nedim Buyukmihci, emeritus professor of veterinary medicine at University of California, Davis and co-founder of Action for Primates, said: ”Although there are biological similarities between non-human primates and human beings, there are also substantial differences that make extrapolating results in non-human primates to people unreliable and, sometimes, extremely dangerous.

“One example was TGN1412, which was found to be ‘safe’ in monkeys, but was deadly in people.

“And a recent systematic review of ‘animal models’ of Covid-19, including non-human primates, showed there were important differences from people that rendered the ‘animal models’ problematic in terms of developing a vaccine.

“Given the widespread nature of Covid-19 and the huge and varied pool of patients worldwide that can be tapped, there is no need to try to ‘model’ the disease in non-human primates or other animals. Waiting for a ‘miracle’ from ‘animal model’ research just means more people will be at risk.”

Sarah Kite, co-founder of Action for Primates, said some pharmaceutical companies started human trials on Covid vaccines before monkey studies had ended because they were being “more creative” in trying to reduce animals used.

“This is a backward step at a time when there is increasing awareness and concern about the use of non-human primates in research with efforts to move away from this,” she added.

The Independent has asked Envigo to explain why it wants to conduct the primate research and to respond.

It had not responded by the time of publication, but its website says: “The value of animals in this critical research is essential for advancing our understanding of the body in health and disease, and for developing new medicines and other compounds. Without animal research, we would not be able to produce the life-changing medicines that enhance and save lives across the world.

“In carrying out animal research for our customers at Envigo, we follow the principles of the 3Rs – replacement, reduction and refinement. We ensure the 3Rs are considered at all levels of the company.

“This means we work with alternatives to animals whenever we can, we aim to carry out studies with the fewest number of animals possible, and we take measures to minimise any pain or distress before, during and after experimental procedures.”

It says the company also uses other research methods such as cell cultures, in-vitro techniques, computer modelling, bioinformatics and clinical trials in people.

“We only work with animals when there is no other way of performing that research … we are working to develop alternative techniques.

“Animal welfare is a top priority. We adopt a humane and compassionate approach, actively fostering a culture of care towards our animals and aim to operate to the highest professional standards. Animals that are well cared for allow us to produce better science and more reliable data.”