We’re Not the Only Animals Who Feel Grief and Spirituality

We’re Not the Only Animals Who Feel Grief and Spirituality

“The reason we can experience grief and relate spiritually is because we’re animals, not despite the fact that we’re animals.” —Teya Brooks Pribac

It’s clear that humans are not the only animals who experience grief and loss and it’s narrowly and anthropocentrically arrogant to think we are.1 Along these lines, a new and wide-ranging transdisciplinary book titled Enter the Animal: Cross-species perspectives on grief and spirituality by Dr. Teya Brooks Pribac, an independent scholar and multidisciplinary artist who lives in the Australian Blue Mountains with sheep and other animals, convincingly argues that nonhumans experience loss and embodied experiences, and so do we because we’re also animals.2 Here’s what Teya had to say about her new book, a significant addition to the literature in the field of Animal Studies.

Why did you write Enter the Animal and how does your book relate to your background and general areas of interest?

This book is, in many ways, accidental. I started to feel that my advocacy for nonhuman animals was inefficient, I needed to know more, understand more. I enrolled in a Ph.D. program and ended up researching grief. I was part-time but I was devouring the literature whenever I could, everything was new to me and utterly fascinating. I’d had no idea how much there was out there to uncover. 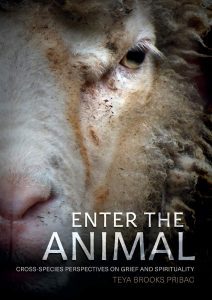 Because I was more preoccupied with learning than with the degree itself, my dissertation started to grow in all sorts of directions. I wanted to write about everything. I published a few papers and then started to wonder how it was all going to fit together. But when I sat down with it I found that the whole thing was way more connected than I’d realized. My supervisor and the external examiners responded very positively and encouraged publication. Word got around and the series editors at Sydney University Press were curious about it so I turned it into a book and submitted it to them. The rest is history, as they say.

Who is your intended audience?

The book explains and synthesizes some critical aspects related to animal subjectivity, including some of the history, and it can serve as a good base-text for anyone involved in animal studies but also generally anyone interested in the more than human world. People don’t have to agree with my interpretations to be able to benefit from a lot of the information included in the book.

The central topics are animal grief and spirituality. My major point is that both grief and spiritual engagement are first and foremost organismic responses: grief to loss, and spirituality to various tangible and less tangible agencies in the environment. This doesn’t take away any of the magic, quite the opposite: our bodies are beautiful systems, perhaps we need to re-learn to appreciate them more.

Thinking about experiences can color them in distinct ways but human-style interpretations don’t seem to be essential for the experience to emerge, our animal bodies are. The reason we can experience grief and relate spiritually is that we’re animals, not despite the fact that we’re animals. This resonates with positions that others have advanced recently in relation to animal subjectivity. In this book, I try to explain how and why this works for grief and spirituality.

When I talk about spirituality I have in mind an embodied experience that is separate from interpretative solutions. I make a distinction between religion and spirituality. Religion includes a strong cognitive closure (interpretative) component. In contrast, I see spirituality as an effective opening. It emerges at an encounter with perceived agency that the brain can’t automatically squeeze into a known category, leaving space for direct engagement. This engagement is experienced as meaningful without having to be “converted” into meaning through the interpretative apparatus. Take Jane Goodall’s famous chimpanzees at the waterfall. Of course, it is possible that they had a powerful and meaningful spiritual experience even if they’ve never developed a theology out of it.

Both responses, grief and spiritual engagement, are rooted in the intrinsically relational nature that is characteristic of animals. From conception on we are in constant communication with the environment. The organism learns to respond to perceived agencies way before we become capable of any kind of cognitive elaboration. Our organism is primed for such communication, it is shaped by it, and it remains open to it throughout life.

When we consider other animals’ grief we also tend to get derailed by satellite questions, which can obscure the potential emotional impact of loss. To apprehend this impact better, we need an adequate appreciation of the role and power of attachment relations. That’s why I go into some detail about attachment theory, which, for the record, was inspired by the work of early ethologists. When we peel off the layers of assumptions and prejudice, I think it becomes clear that differences in the experience of grief manifest on an individual rather than species level (at least for mammals and birds but probably wider) and these differences are dependent on the nature of the lost relationship, the psychological constitution of the bereaved individual, and similar more intimate factors.

So-called complicated grief is an interesting example. Research shows that in subjects with complicated grief brain areas linked to rewards activate alongside areas linked to pain processing. One gets quite literally stuck, and the organism craves the lost subject as it may an addictive substance. Certain developmental contexts make individuals more prone to complicated grief and many nonhuman animals, especially in captivity, may fall into these vulnerable categories–think of “suicidal dogs”.

Both disruption and prevention of attachment relations affect us animals deeply, often with long-lasting effects. I’m starting to think that the kind of embodied spirituality I talk about also has significant psycho-biological value and that the way we treat other animals and the planet generally may be causing a lot more suffering than we currently imagine.

What are some of your current projects?

This project has had a profound impact on me. I needed time off research to process things. I used to be quite impatient with other humans, self-righteous at times, perhaps that’s why my advocacy wasn’t all that efficient early on. Having a deeper understanding of the various factors that inform our thinking and action has helped me to address some of my shortcomings. I also took up yoga and learned a few new skills: for example, I built a brick path, erected a metal fence, and improved my vegan cheese. I’m very pleased with these things but I’m starting to get restless and perhaps ready for the next project, “Followism: revenge of the sheep.” I want to look into social learning across species.

1) Numerous essays reference the many and diverse nonhumans who experience grief and loss can be seen here.

2) The book’s description reads: Historically, grief and spirituality have been jealously guarded as uniquely human experiences. Although non-human animal grief has been acknowledged in recent times, its potency has not been recognized as equal to human grief. Anthropocentric philosophical questions still underpin both academic and popular discussions. In Enter the Animal, Teya Brooks Pribac examines what we do and don’t know about grief and spirituality. She explores the growing body of knowledge about attachment and loss and how they shape the lives of both human and non-human animals. A valuable addition to the vibrant interdisciplinary conversation about animal subjectivity, Enter the Animal identifies conceptual and methodological approaches that have contributed to the prejudice against nonhuman animals. It offers a compelling theoretical base for the consideration of grief and spirituality across species and highlights important ethical implications for how humans treat other animals.

Bekoff, Marc. Grief in animals: It’s arrogant to think we’re the only animals who mourn.

_____. What Do Animals Know and Feel About Death and Dying?

_____. Do Dogs Know They’re Dying? What Citizen Science Tells Us.

_____. Grief in Prairie Dogs: Mourning a Death in the Family.

_____. Do Animals Have Spiritual Experiences? Yes, They Do.