What Orangutans Taught Me About Motherhood 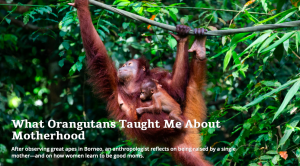 The first time I saw wild orangutans, in Borneo back in 2017, it was a mother-infant pair that caught my eye.

The mother, Bibi, had baby Bayas resting on her torso as she ate some fruit up in the crook of a tree, undeterred by the humans watching from below. When she decided to move to a different branch, Bayas continued to cling to her belly. To me, everything about Bibi was beautiful. She looked strong, confident, and capable. She reminded me of my own mother.

It was during this first day of fieldwork as a primatologist watching Bibi and Bayas that I realized why I had been so drawn to orangutans in the first place. Like me, orangutans are raised by a single mother. For the majority of my life, my two younger sisters and I have relied on my mom for everything: food, resources, shelter, and protection.

My parents divorced when I was very young, and my stepfather, who helped raise me, left during the financial crisis of 2007, when I was 13 years old. My dad’s presence in my life has been variable and intermittent. Oftentimes, months or years go by in between phone calls or visits. As for my stepfather, we haven’t heard from him for 13 years.

For many years, my family struggled in the wake of my stepfather’s absence. Everything was harder. Financially, my mom needed to cut down on our living expenses to make ends meet. She no longer had her partner to mow the lawn, cook dinners, grocery shop, do the car maintenance, or help shovel the driveway when we got a foot of snow overnight. My sisters and I tried to help when we could, but our mom told us our job was to do well in school.

To a large degree, we pretended to those outside the family that my stepfather was still living with us and everything was just fine: We were fearful of the stigmatization of divorce. Back then, I didn’t know anyone who was being raised by a single parent and certainly hadn’t heard anyone praise a single mother for being a great parent. 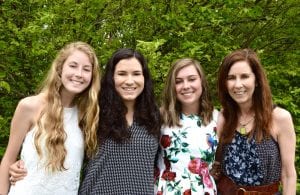 The author (second from the left) with her two sisters and her mother. Courtesy of Faye Harwell

Nowadays, motherhood appears in all shapes and sizes in the United States. There are working mothers, stay-at-home mothers, married mothers, unmarried mothers, remarried mothers, lesbian mothers, trans mothers, foster mothers, and mothers through adoption. Some women enter motherhood in their teens. Others wait much longer to have their first child, sometimes with a little help from medical technology. Many—like my mother—are single moms.

There are “good” moms in all these categories, of course. Today women benefit from guidelines informed by medical expertise and books written about nearly every facet of childrearing, from nutrition to discipline. But this is an extremely new phenomenon on the timescale of human evolution. There is something older and deeper that helps women become good moms.

Evolutionarily, we define a “good” mother as one with high “fitness”: producing many offspring that survive to reproduce themselves.

Fifi, a female chimpanzee studied by Jane Goodall, is well-known among primatologists for being a good mother. Female chimps usually leave their birth families and join a new group when they reach sexual maturity around 11 years old; they typically become mothers around 13 years old, mating promiscuously and then caring for their offspring alone, with some help from other females (not being entirely sure who the father is). Fifi, however, is unusual: She didn’t migrate away from her mom’s group.

By staying with her mother, Flo, Fifi quickly ascended the matriarchal ranks and eventually became the top-ranking female, just like her mom had been. Fifi had watched and helped her mom care for her two younger siblings, Flint and Flame, until she became a mother to her first-born son, Freud. Most wild chimps only have about four children. Throughout her lifetime, Fifi gave birth to nine offspring, all of whom could pass her genes on to the next generation (and carry on the family tradition of having a name starting with “F”).

Orangutans also have bountiful opportunities to learn mothering skills from their moms: They have the longest period of juvenile dependency of any primate aside from humans. Orangutans stay in close contact with their mothers until around the age of 7, when they are weaned from breast milk and start making their own nest to sleep in at night. It isn’t until they are 11 years old that orangutans roam the forest fully on their own. It is nice to think that I could return to Borneo’s Gunung Palung National Park in the coming years and still find Bibi caring for Bayas.

Female orangutans typically start having children around the age of 15 and will raise their children almost entirely alone. Despite this lack of support, they have a very high survival rate for their young. The children learn life skills from their mothers, like how to use a stick to dig out the edible seeds from Neesia fruits, how to navigate through the high, dangerous forest canopy—and how to be a mother.

In zoos, we see this same pattern: Primates learn how to be good mothersthrough observation. Among female great apes, for example, first-time mothers benefit from having watched the maternal behaviors of their own mother and other females before giving birth themselves. While humans can successfully hand-rear a great ape baby, those apes tend to be less successful at caring for their own infants later in life: They can struggle to breastfeed, for example. This is one instance where a mother really does know best.

The same holds true in many modern hunter-gatherer populations. In general, hunter-gatherer mothers interact with their children more than fathers, grandparents, or older siblings. Mothers receive a variable amount of help with child-rearing from fathers and “alloparents” (other members of the community who step in to do child care). They nurse infants frequently and wean their children anywhere between the ages of 2 and 4. Girls grow up with numerous opportunities to help with younger children and observe how to care for children. Women form strong social bonds with one another as they carry out domestic tasks together, and mothers can seek advice from other mothers, including their own. 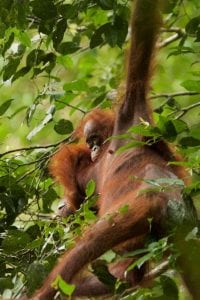 Bibi and Bayas, the mother-infant pair observed by the author in Borneo, will be together for years to come—until Bayas is independent and ready to roam the forest on his own. Russell Laman

In the most literal sense, hunter-gatherer groups demonstrate how it takes a village to raise a child—and the children learn from that village about motherhood.

Regardless of species or population, motherhood is an energetically demanding life stage: Pregnancy, nursing, and raising children can be exhausting. From the beginning, mothers must invest heavily in their offspring, whereas fathers typically choose how much they invest. My mom didn’t get to choose whether or not she would like to raise three children on her own: That decision was made for her. Lucky for me, she took on this role without hesitation.

As time continued to pass after my stepfather’s departure, my family grew accustomed to life without him. Our extended family and close friends eventually learned of his absence and started to help my mom transition into her new role. It felt like the people closest to us had an unspoken agreement to help whenever possible, in both little and big ways. Little did I know at the time, alloparenting occurs in many primate species and human societies.

Just like Bibi, my mom dedicated much of her life to raising my sisters and me. As a teenager, I resented the struggles we had to face as a family, believing that I would have benefited from a “normal” childhood. I didn’t realize at the time that I was like baby Bayas clinging to Bibi—I needed my mom to survive. Nor did I appreciate all the sacrifices and trade-offs my mom was making in her own life to help my sisters and me succeed.

I admire my mother, above all else, for her determination during the hardest times, when she was left completely alone in her efforts to raise three daughters. Throughout all our hardships, my mom became my greatest protector. No matter what, she kept me safe, just as Bibi keeps baby Bayas safe from starvation and falling from great heights.

I watched my mom work a full-time job as a group therapist, take care of all the domestic chores, and raise us, alone, to be strong, independent women. To me, she leads by example. And when the time comes, I know that I will be a good mother too—because I have been raised by a good mother.