Why Chimp Moms Flock to Caves on the Savanna

When forests and woodlands don’t provide a respite from the heat, these primates find cooling centers in their arid landscape. 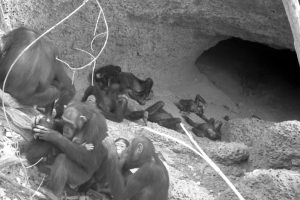 Chimpanzees captured by a remote camera at the entrance to Drambos Cave in Senegal. The camera captured nearly 14,000 images of a total of 45 chimpanzee cave visits over two years. Credit Kelly Boyer Ontl

Everyone needs to cool off on a scorching summer day, even chimpanzees. Where do the primates go on sizzling days when woodlands and forests don’t provide respite from the heat?

But not just any chimps. New research shows that on Senegal’s savannas, home to a population of chimpanzees that has long fascinated scientists for their distinct behaviors, you’re more likely to find mama chimps than adult males or non-lactating females hiding out in cool caves. Their visits coincided with the hottest times of day and became more frequent during the hottest months of the year, according to the study published last month in the International Journal of Primatology.

They also made these visits despite the risks of encounters with predators, showing how important the locations are for helping them survive and bring up babies in a challenging landscape that is threatened by human activities.

In southeastern Senegal, temperatures spike to 110 degrees Fahrenheit and fires burn large parts of the landscape over a seven-month dry season. Several natural cave formations pock the terrain, and they can be up to 55 degrees cooler than the surrounding grasslands. The region is also home to the northernmost population of western chimpanzees, a critically endangered subspecies that mostly lives in large swathes of open grasslands and woodlands in this area.

In 2001, Jill Pruetz, a primatologist then at Iowa State University, gathered evidence of western chimpanzees using caves in the area, suspecting that they used them to escape the heat and possibly avoid heat stroke and other ill health effects of the dry season. But she reached few conclusions about whether all of the chimps used the caves as often as others.

Kelly Boyer Ontl, a primatologist at Ball State University in Indiana and lead author of the new study, said, “I was really interested in finding out what chimpanzees are doing in caves, when are they using it and who’s going in there.”

In 2010, a local hunter introduced Dr. Boyer Ontl to Drambos Cave. He’d observed small parties of resident chimpanzees go in and out. So, Dr. Boyer Ontl set up a camera facing the entrance of this “living room-sized” cave for 325 days between 2011 and 2013. The camera captured nearly 14,000 images of 45 total chimpanzee cave visits, involving 35 individuals — 17 adult females (10 of which were nursing mothers), three adult males, five juveniles and 10 infants.

Of those 45 visits, 42 were by the lactating females. The mothers arrived in parties of four, on average, along with their infants. They spent most of the time resting, socializing and grooming, while the infants played with one another. Sometimes, the mama chimps brought along snacks: fruits of the African baobab and camel’s foot tree.

“The cave isn’t a lactation room for nursing chimps,” Dr. Boyer Ontl said. She had noticed that the visits peaked in April and May — the hottest months of the year — and around noon, when temperatures reached their maximum. “It’s a cooling center to rehydrate.”

Nursing mothers have a greater demand for water because they need the extra fluid to produce milk for their infants. In humans, for instance, water makes up 87 percent of breast milk. When it’s hot, mammals, in general, cope by sweating and losing water and thus heat from the body. But when conditions get arid, animals can’t afford to lose any water.

“It makes sense that the mothers may well be more stressed and seek shade as a way to help them conserve water,” said Robyn Hetem, an animal physiologist at University of the Witwatersrand in South Africa, who wasn’t involved in the study.

While the Drambos Cave offers female chimps much-needed respite from the heat, visiting this cavernous refugia with their infants isn’t risk-free. Predators such as leopards and hyenas also seek shelter in these cool environments.

In 2013, Dr. Boyer Ontl captured footage of a leopard chasing out a female chimpanzee entering the cave with her two kids. Despite this potentially life-threatening encounter, they returned to use the cave within two hours of the incident with other chimps.

“The caves are important enough that they’re willing to go where predators are likely to be,” Dr. Boyer Ontl said.

Currently, conservationists and scientists are putting together an action plan to protect Senegal’s western chimpanzee population, whose future is threatened by mining and habitat destruction. “One of our main goals is to identify all the cave habitats for chimpanzee conservation,” said Papa Ibnou Ndiaye, a behavioral ecologist at the Cheikh Anta Diop University in Senegal, who is part of the working group.

For him, this exercise becomes all the more important now, given the benefit caves could provide to nursing chimpanzee mothers and their young ones — the future generation of this critically endangered subspecies.