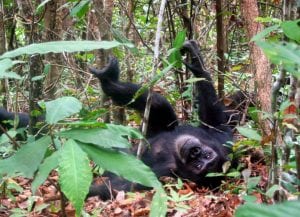 A chimpanzee in Gombe National Park in Tanzania. Researchers have found that wild and captive chimps share personality traits much like those observed in humans. -Alexander Weiss

In the late 1950s and early 1960s, Jane Goodall started attributing personalities to the chimpanzees she followed in Gombe National Park in what is now Tanzania. In her descriptions, some were more playful or aggressive, affectionate or nurturing.

Many scientists at the time were horrified, she recalled. Considered an amateur — she didn’t yet have her Ph.D. — they contended she was inventing personality traits for animals.

Dr. Goodall, now 83, said in a phone interview on Monday from her home in England that scientists thought “I was guilty of the worst kind of anthropomorphism.”

But time has borne out her insights. Chimpanzees in the wild have personalities similar to those in captivity, and both strongly overlap with traits that are familiar in humans, a new study published in Scientific Data confirms.

The new examination of chimpanzees at Gombe updates personality research conducted on 24 animals in 1973 to include more than 100 additional chimps that were evaluated a few years ago. The animals were individually assessed by graduate students in the earlier study, and in the latest by Tanzanian field assistants, on personality traits like agreeableness, extroversion, depression, aggression self-control.

Researchers used different questionnaires to assess the chimps’ traits in the two studies, but most of the personality types were consistent across the two studies.

These traits seen among wild chimps matched ones seen among captive animals, the study found, and are similar to those described in people.

Dr. Goodall, who is promoting a new documentary, “Jane,” about those early days of her research, said she’s not surprised. She knew from childhood experiences with guinea pigs, tortoises and her favorite dog, Rusty, that animals have personalities that are quite familiar.

“I honestly don’t think you can be close to any animals and not realize their very vivid personalities,” she said.

Clive Wynne, a professor director of the Canine Science Collaboratory at Arizona State University in Tempe, who was not involved in the research, said the new study offered a “really rich picture” of the overlap among species.

“It’s backing up and reinforcing a number of things that we assume about personality that seldom established with this degree of security in substantial wild-living populations,” said Dr. Wynne, who concurs that dogs, his area of specialty, also have similar personality traits.

Robert Latzman, an associate professor at Georgia State University, who was not involved in the study, said his research with chimpanzees in zoos has always left open the question of whether animals in the wild are somehow different.

“What’s exciting about these data is there’s some suggestion that wild apes look very similar to what we would expect in terms of basic dispositional traits and continuity of those traits — and I don’t mean just to captive chimpanzees, but to humans,” he said. “The work in the wild underscores how similar these animals truly are to humans.”

Alexander Weiss, who led the new study, said he was particularly interested in examining the personality traits of animals in the wild. His findings were in line with previous research he’s done on chimpanzees in captivity.

“The fact that we’re showing this consistency in the wild is because it allows us to draw more general conclusions,” said Dr. Weiss, a senior lecturer at the University of Edinburgh. “It’s not just being in a zoo that’s causing these individual traits to be stable.”

The study’s underlying data will be made publicly available so other scientists can use them in their own research, he said.

Although most of the animals tested in 1973 had died by the time the recent analysis was conducted, the study also concluded that an animal’s personality traits were generally consistent over time.

Dr. Goodall said that fits what she’s seen, too. She only visits Gombe twice a year now, and only two animals are still alive from the days when she knew them as individuals. One, a mother of twins named Gremlin, has changed a bit, Dr. Goodall said.

“I think the main difference in her personality is she’s become more confident as she gets older, just like people do,” she said.

Dr. Goodall added that she’s pleased that researchers are still finding so much of interest at Gombe, and tapping into the expertise of Tanzanian field workers.

And, of course, she’s happy that the academic perspective has shifted from the time when she was told only humans had personalities, minds emotions.

“Today you can get your Ph.D. studying animal personality. I think we’ve come around full-cycle,” she said. “It absolutely vindicates all that I’ve ever believed.”