When we think of Mother’s Day, it’s usually a day to spend time with mothers and show them our appreciation and love. But not everyone is that lucky. Human, ape, and monkey alike, some of us aren’t able to be with our mother on this special day.

Most primates living in sanctuaries weren’t given much of a chance to know or be cared for by their own mothers, because they came from human homes, laboratories, or training facilities. For the pet trade, entertainment industry and biomedical research, primates are taken from their mothers only days after being born. It is a cruel act on both mother and child, causing irreparable damage to both individuals. The heartache that the “breeder” mothers must endure time and time again as their babies are taken from them and the shocking reality that the babies come to realize when they are stolen from their mothers’ arms and thrust into a human home or laboratory “nursery” setting is devastating to think about.

Yet somehow, these amazing beings carry on.

We have witnessed so many touching moments between the primates in our care. We have seen individuals with such heartbreaking pasts go from being filled with sadness and fear to being filled with joy and peace when they are finally comforted by another of their own kind.
We can never fully replace what they have lost or make up for the injustice they have endured, but they themselves can heal each other by being mothers, fathers, sisters, and brothers to one another.

There are a few individual stories of PRC residents that stand out to us as we reflect on Mother’s Day. 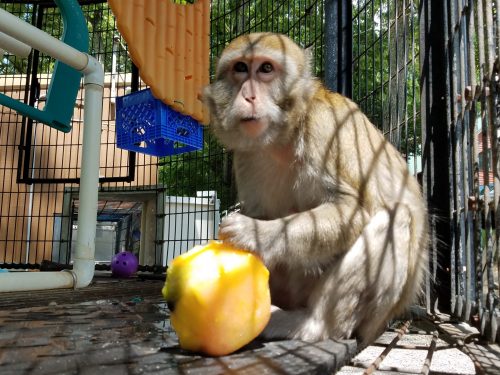 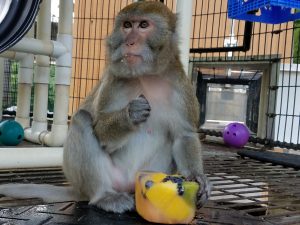 Breanna rhesus/long-tailed macaque arrived at the PRC when she was about 5 years old. She was introduced to Caleb, a vervet monkey who came to the sanctuary at just 10 months old. Breanna quickly bonded with young Caleb and became a big sister/motherly figure to him, doting on him and grooming him regularly from head to toe, and teaching him some monkey social skills. Breanna got the chance to fulfill a role that she seemed happily born to do, and Caleb got a second chance at having a mother to care for him as a young monkey. 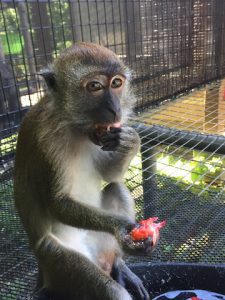 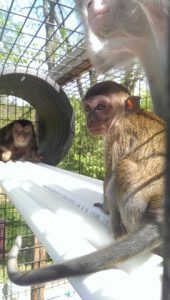 When Carlos long-tailed macaque was rescued at the young age of 14 weeks, the care staff quickly had to figure out a good companion to care for this tiny monkey.

Crunchy, a pigtail macaque, and Dewey, a rhesus macaque seemed like the perfect pair to raise little Carlos and keep him safe and warm. Crunchy was an amazing surrogate mother and would carry Carlos under her belly and hug him when he needed comfort. She shared her food with him and let him sleep snuggled up next to her each night. 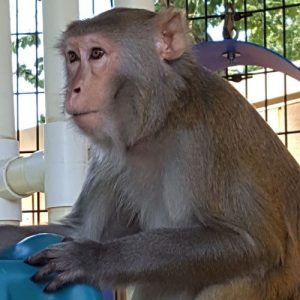 Rhesus macaque Bailey actually had the chance to mother two of her own offspring at the PRC. Although we curtail breeding amongst the primates, we had a couple of “accidents” when Bailey’s then companion Dewey’s vasectomy procedure reversed itself–twice!

Sawyer and Jane were born in 2005 and 2006 and were lucky enough to be raised by their own mother. Bailey’s instincts kicked in immediately. She knew exactly what to do to care for her children. She nursed each of them and made sure they were clean and safe–both Sawyer and Jane did not venture off of their mother’s body for one year. Bailey gave them what no human can replicate. 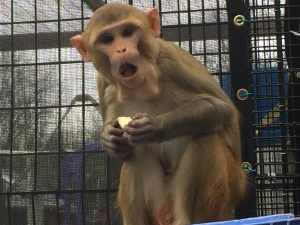 George rhesus macaque arrived at the PRC when he was close to a year old and definitely showed signs of distress and trauma after having spent time in a human home with no one to truly care for him or guide him as he grew. George needed a momma (and quick!) so he was introduced to Saidah Barbary macaque.

Saidah has been an excellent role model for George and has helped him to calm down and enjoy life. She cares for him and grooms him, but she also scolds him when he gets a little too rowdy. George seems to feel much safer in her care and will call for her when he’s feeling insecure or alarmed by something. 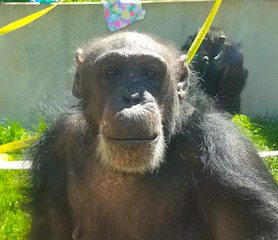 Zulu chimpanzee is another example of an amazing mother. She may not have birthed them herself, but Zulu seems to think of Cory, Rodney, and Ike as her sons.

She watches over them, defends them, shares her food and her nest with them, plays with them, kisses them, and never leaves their side when they are feeling under the weather. Even when they get a little naughty and rambunctious, she loves them still and always forgives them for their misbehavior.

Happy Primate Mother’s Day to all mothers out there, in our lives or in our hearts and memories, who have birthed children, lost children, raised children, or simply loved a child as their own. You are all remarkable and precious.