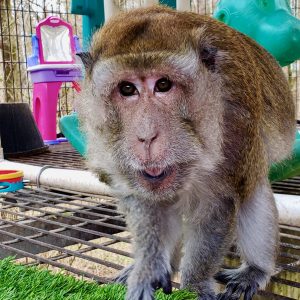 On March 2, 2020, we said goodbye to our beloved, old friend Jax long-tailed macaque, as we helped him pass away peacefully surrounded by those who loved him. He was estimated to be 23 years old. After evaluating test results and physical exam findings, we determined that Jax most likely developed a form of cancer that spread to multiple organs and had become too much for his body to bear. After much consideration and careful observation of Jax’s quality of life, we decided to help this sweet boy and give him the final gift of passing in peace.

Much of Jax’s history is unknown, with only tell-tale signs of time spent in a medical laboratory and evidence of severe neglect after years in a human home. We do know that Jax was confiscated from a private residence in Missouri and spent a short time at the St. Louis Zoo before he was ready to travel to the PRC in October of 2015. He was estimated to be 18 years old but physically looked like much more aged macaques. 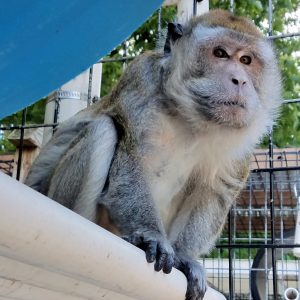 When he arrived at the PRC, Jax had many missing teeth and was underweight. His tail was only a few inches long due to an unknown trauma that was most likely an injury or result of frostbite from freezing conditions endured while he was a pet. He also displayed decreased flexibility in his limbs and back. It was clear that Jax had been severely neglected and had not received any medical care, possibly his whole life. We were so happy to be able to rescue Jax and give him the love and care he so desperately deserved. 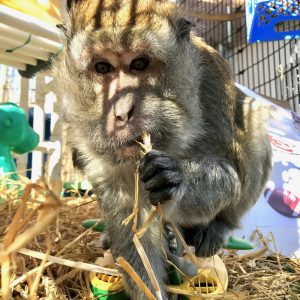 Although Jax was initially very cautious of his human caregivers because of so many years of neglect at the hands of other humans, he quickly relaxed and shared his wonderful personality with us. He was eager to have monkey companions and made many friends while living at the PRC, including Bubbles, Opal, and Zoe. He enjoyed his time with these girls and settled into sanctuary life with ease. Jax was calm, gentle, and always up for a grooming session. Although he preferred to be groomed, he would often be the first to start a grooming session and spend hours patiently and delicately attending to his monkey companions. 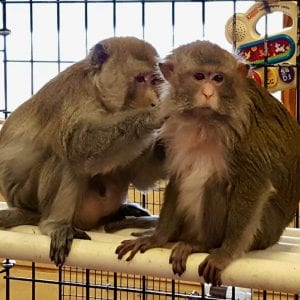 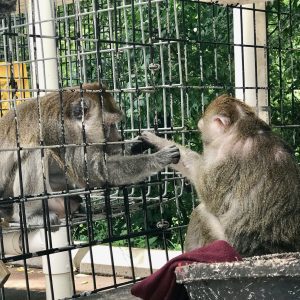 Jax with Opal during the early stages of their introduction 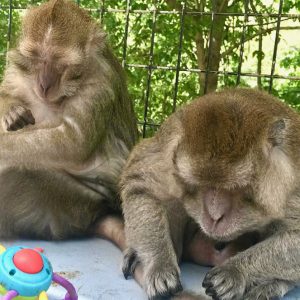 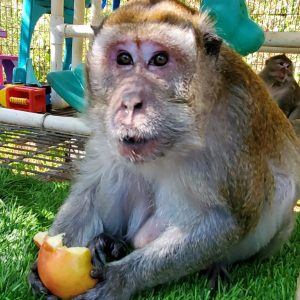 Jax was a sweet and caring companion. He was very kind to his friends and always kept a protective and loving eye on them in their home. He was also known for his love of mirrors. He would look at and lip smack at his handsome reflection and also use it to look at the trees and wildlife around his enclosure. Jax’s favorite foods were broccoli, spinach, eggs, and green grapes. 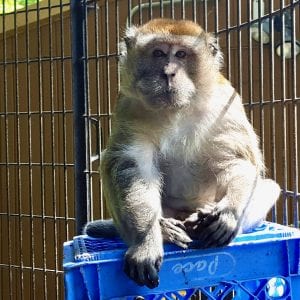 The caregivers and Jax’s companions all miss Jax very much, and it is so hard to say goodbye to such a sweet, gentle, resilient, and beautiful soul. We take comfort in knowing that he was able to spend the last years of his life in a safe and peaceful place with monkey friends. It was an honor to care for him, and he will forever live on in our hearts and memories. 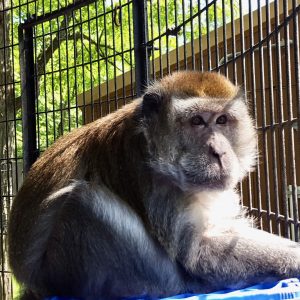