A Beacon of Hope: The Legacy of Dewey

A Beacon of Hope: The Legacy of Dewey 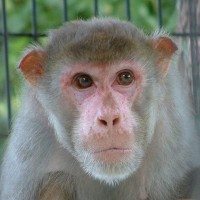 Although each primate we have been honored to care for at the PRC is unique, equally special and dearly loved, a few who stand out amongst the long list of rescued primates over the past 35 years will always hold a special place in our hearts. One such soul is Dewey, a male rhesus macaque who was retired to the sanctuary in August of 1997 and lived a full and beautiful life here until his passing in March 2021.

Dewey’s estimated birth date was the mid 1970s, most likely in a breeding facility designed to supply laboratories with primates for research. Dewey ended up as a test subject for narcotics research that involved placing a catheter device through Dewey’s skull to administer powerful narcotics directly to his brain. Dewey spent all of his time in isolation and could only see directly in front of his restrictive cage, which was just large enough for him to turn around. Dewey had many infections and issues with this catheter site on his head. Those who cared for the laboratory primates would treat his infections, but they were obligated to reinsert his catheter again and again. Because of this, Dewey’s health deteriorated to the point that he was no longer a viable test subject. 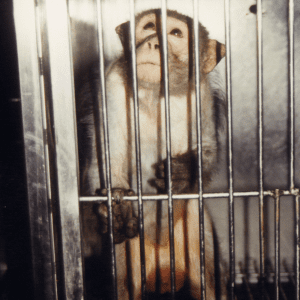 Dewey in the laboratory

Especially in the 1980s and 1990s, laboratories would routinely euthanize animals once they were no longer needed for testing. However, Dewey’s caregivers had developed a deep and meaningful connection with him over the years and wanted so much more for him. After much effort, they convinced the authorities to allow Dewey to live out the assumed little time he had left at a sanctuary and made arrangements to transfer him to the Primate Rescue Center. When he arrived, it was clear that his tiny body had already endured so much – pale skin from never experiencing the outdoors or sunshine, very little hair on his body, and a host of medical concerns. It was at the PRC that Dewey began his journey of rehabilitation to recovery. Living to be over 40 years old and in sanctuary for more than 23 years, Dewey is a true testament to the strength and resiliency of the primate spirit and proof that rehabilitation and recovery are possible, even for those who have endured the worst of abuses.

Although Dewey arrived in extremely poor health, he was able to recover from his medical issues and responded well to sanctuary life. He went on to father two “surprise” children, Jane and Sawyer, with former resident Bailey after a couple of failed vasectomies. As social dynamics and group needs shifted, he also lived with other monkeys during his time in sanctuary, including a pigtail macaque named Crunchy and current PRC residents Carlos, Breanna, Bubbles, Zoe, and Nikki. He seemed to always accept new friends with open arms, whether rambunctious youngsters who needed calm and gentle guidance from their Grandpa Dewey or sweet older ladies who were happy to spend their days grooming through Dewey’s hair and sharing snacks – Dewey was a loyal friend to all. 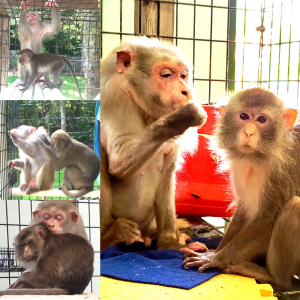 From top left – Dewey with Carlos, Breanna, and Bubbles 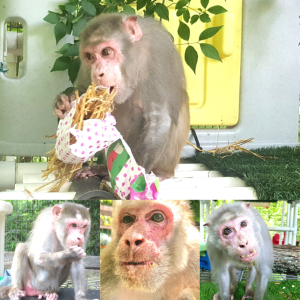 This past August marked 25 years since Dewey’s rescue. Although we wish sweet Dewey was still with us now, his legacy on this milestone year continues to remind us that despite the cards you are dealt, your life can change for the better in an instant. Even during the dark and seemingly hopeless times, you can survive and go on to experience a fulfilling, joyful, and happy life. And Dewey was proof of that.

We will always be inspired by Dewey’s journey and incredible story. His life defied the odds at every turn, and we were so fortunate to witness his incredible resilience, kindness, acceptance, and fortitude firsthand. Dewey’s spirit and perseverance will remain forever woven through the fabric of the sanctuary and persist as a beacon of hope for all those who need a second chance at life. With this in mind, we have created the Beacon of Hope Fund in honor of Dewey where you can direct your donation in his memory to help other primates who need that second chance to come out of the darkness and into the light. 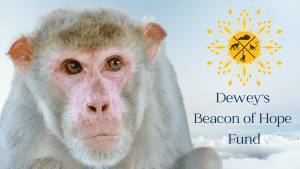