When Kevin Langergraber heard a scream in the rain forest, he ran to see what was happening. 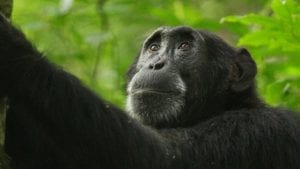 It started as a good day. As usual, Kevin Langergraber got up at dawn to follow and observe the chimpanzees of Ngogo, in Uganda’s Kibale National Park. An anthropologist from Arizona State University, he has been studying the group for 19 summers. This year, food has been scarce, and so have the chimps. But yesterday Langergraber found a group of 30 adults playing and relaxing, with infants crawling all over them. “It was just me and 30 chimps,” he says. “I was so happy. And it just turned so quickly.”

Later in the day, the chimps were on the move, traversing a familiar route between two stretches of forest. Shortly after they reentered the trees, Langergraber, who was right behind them, heard one of them scream. He thought they had stumbled onto a buffalo or an elephant, but when he ran up to them, he was shocked to see two people. Poachers.

Langergraber ran at them, shouting. One angry scientist is hardly a threat, but he could have had more people, or armed rangers, behind him. The poachers fled. Their dogs didn’t.

The poachers had brought a few dozen hunting dogs. Half of them were mauling a female chimp named Kidman and her 25-day-old infant. Another small pack was tearing at Jumbo, Kidman’s six-year-old son. Langergraber ran up and started kicking the dogs, to no avail. Then he realized that a spear was sticking out of Kidman’s back. He pulled it out and started spearing the dogs attacking Jumbo. The dogs and chimp tumbled down a hill, and Langergraber ran after them. Eventually he had killed or wounded enough of the dogs for Jumbo to flee.

Langergraber climbed back up the hill to find Kidman on the ground, bleeding out, still being mauled. Her adult son Elton and his close friend Hicks were trying to chase the dogs away, and Langergraber joined in. Hicks fled with Kidman’s wounded infant. “In the end, it was just me and Elton fighting off dogs,” Langergraber says. They eventually succeeded, but it was too late for Kidman, who died a few minutes later, either from the two spear wounds in her back or from the injuries inflicted by the dogs. Elton went up to her, sniffed her one last time, and fled.

It had been 10 minutes since Langergraber heard the scream, and he was standing there surrounded by seven dead dogs, several wounded ones, a spear covered in both chimp and dog blood, and the body of a chimp he had known for 19 years. “It was just horrible,” Langergraber says. “You know chimps die, but when it happens right before your eyes, it’s so real. And it was hard having to spear all these dogs. I’m a dog lover. But it had to be done.” He stayed with Kidman’s body for four hours.

A few hours later, Langergraber’s colleagues found Hicks still with Kidman’s infant, carrying it on his stomach as mothers usually do, and as adult males very much don’t. Today the team learned that the infant is dead. Even if it hadn’t been mauled, it likely wouldn’t have survived without its mother. 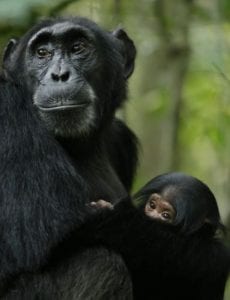 Kidman and her infant, in a photo taken three days ago (Kevin Langergraber / Ngogo Chimpanzee Project)

The Ngogo community is the largest known group of chimps, and researchers have been studying it—and trying to protect it—since 1995. Kidman, who was 42 and named after the actress Nicole Kidman, was one of the most beloved individuals there. After surviving a recent bout of respiratory illness, she developed a loud wheeze. Perhaps that made her easier to track. Relaxed and good-natured, she showed little fear of people, and would often fall asleep in front of researchers, cuddling her infants. Perhaps that made her easier to kill.

There’s a lot of debate about whether animals grieve, and it’s easy to read human emotions into animal behavior. But it’s equally hard to argue that chimps don’t mourn or feel loss. Mothers have been seen carrying around the mummified corpses of babies that died weeks ago. Daughters have been filmed grooming their dying mothers, and keeping a sort of vigil as they die.

At Ngogo, a male named Ellington went missing in 2002. He might have been killed by poachers, or even other chimps, but whatever the case, his absence profoundly affected his closest companion, a male named Hare. Once sociable, Hare became withdrawn. He’d show up in big groups, walk around, and quickly depart. John Mitani, who leads the Ngogo Chimpanzee Project, wonders if he was looking for his friend. And Langergraber wonders if the other chimps will react to Kidman’s absence in the same way. “Unless you were one of those 25 chimps that were there, you’d just not see Kidman anymore,” he says. “You’d have no idea why.”

Many of the chimps that witnessed the mauling were extremely close to Kidman. Harper, Hicks’s mother, is one of the oldest females in the group, and had been Kidman’s best friend for decades. Elton, Kidman’s son, is of the age when male chimps split off from their mothers, but he still stuck to her. Her other son Jumbo, who was also mauled, is still missing.

Violence is an inextricable part of nature, and chimpanzees both suffer from it and inflict it. They murder one another. They wage war. Those at Ngogo hunt red colobus monkeys for food. A civil war is also brewing, as the 200-strong group of chimps is fracturing in two and longtime allies are becoming enemies. A male, Basie, was killed by a former ally just this summer. “It’s tough, but you sort of accept it as natural chimp behavior,” Langergraber says. But the poaching “is just … I don’t know … It feels so much worse. It’s senseless.”

In other parts of Africa, chimps are often killed for bushmeat, but in Uganda, there are local taboos against eating primates. Poachers more often go after bushpigs and forest hogs. But if they come across chimps, they will sometimes kill them and feed them to their dogs. That’s what the duo Langergraber scared away were likely doing. And they got away, too. Anti-poaching squads tracked them for miles, but their sniffer dogs lost the scent after running into a herd of elephants.

“This probably happens all the time, but this was a story where someone saw it,” Langergraber says. “And it happened to a chimp that people have studied since 1995. We know her family, her history. We have beautiful photos of her.”

Langergraber has run into poachers in the field before, but never in the midst of killing chimps. More often, chimps are caught in snares that the poachers set for antelope and pigs; about a third of Ngogo’s chimps have snare-related injuries. Kibale now has three anti-poaching teams, including armed rangers from the Uganda Wildlife Authority and snare-removal experts led by “Big James” Tibisimwa. He used to be a poacher himself, but gave up that life when Kibale became a national park. He worked as a cook and cleaner for the Ngogo research project before using his experience to train anti-poaching officers.

The teams are skilled and effective, and poaching declines in areas where they work. But they also have to cover 300 square miles of forest and grassland. “It’s a constant battle to fund these anti-poaching teams, and we wanted to raise money to hire two more,” Langergraber says. “This has been a good kick in the butt to get that going.”