In 2015, a male rhesus macaque was found roaming loose in Bath County, KY. Unsure of where he came from or why he was wandering a residential area, Fish and Wildlife officers captured the lost monkey and brought him to the Primate Rescue Center. He was extremely underweight, lethargic and had a tattoo on his chest with the number sequence “0805355.” The tattoo indicates that he spent some time in a biomedical research lab, but his past still remains much of a mystery. Formerly referred to as “Mystery Monkey 0805355” by the media, this handsome macaque was given the name Andi. When Andi arrived at the Primate Rescue Center, he was quarantined and given a thorough medical examination. 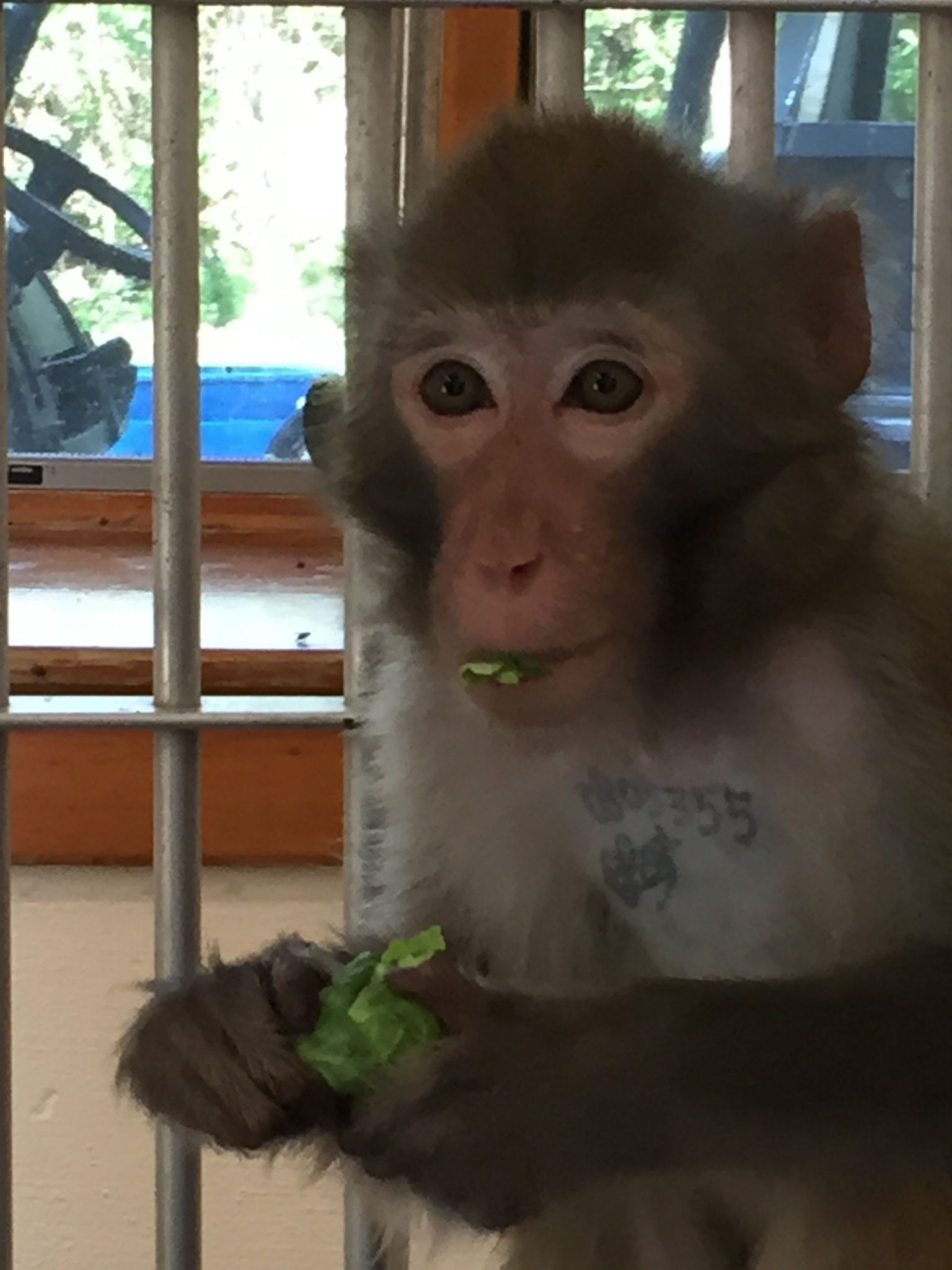 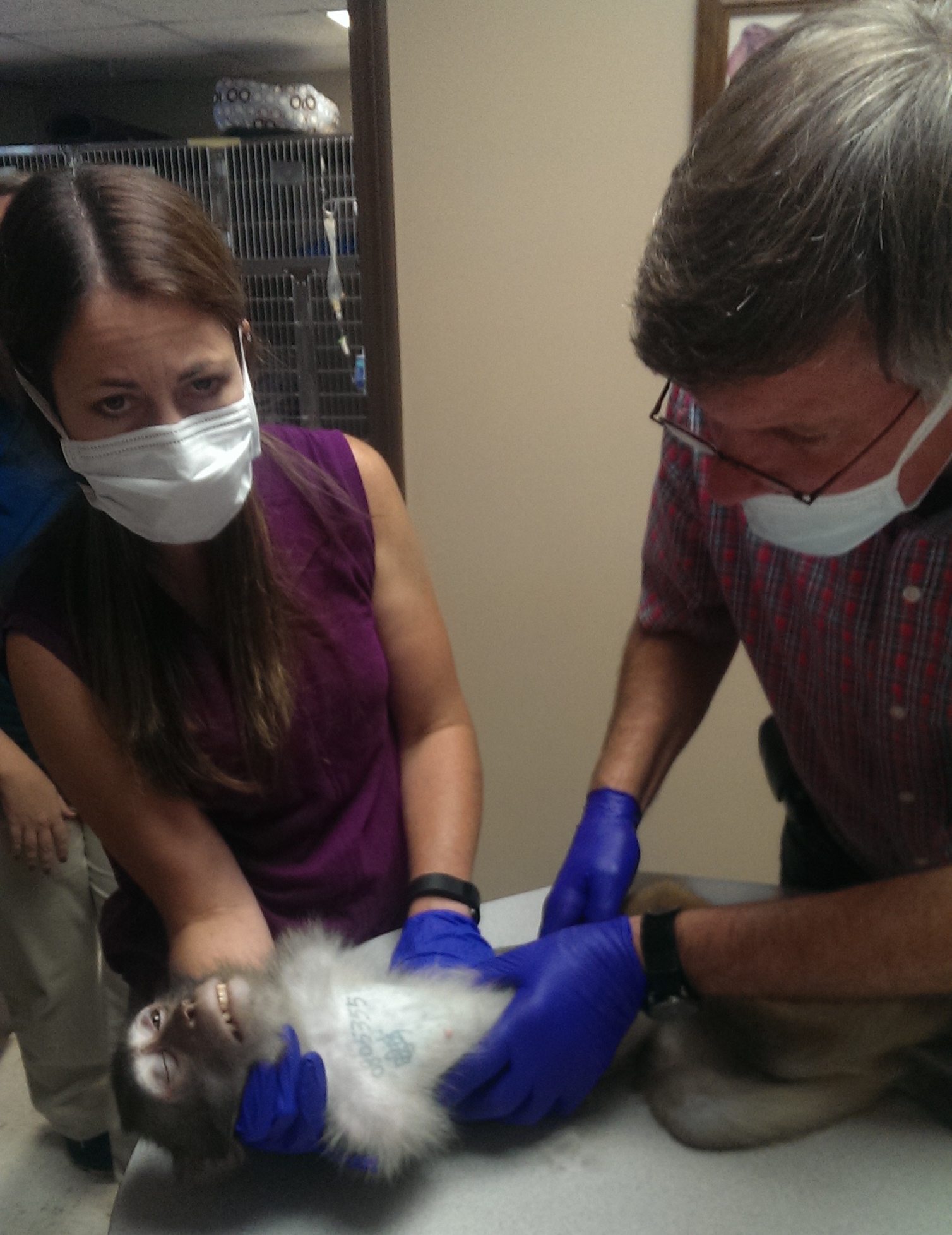 These exams are given to all incoming primates to check their current state of health. First, as we do with any primate during a medical exam, Andi was sedated. Then, we weighed him, checked his vitals and tested for any contagious diseases (such as tuberculosis). Once Andi received a clean bill of health and cleared quarantine, we began introducing him to a female macaque named Breanna so that he could have the companionship that all primates deserve. 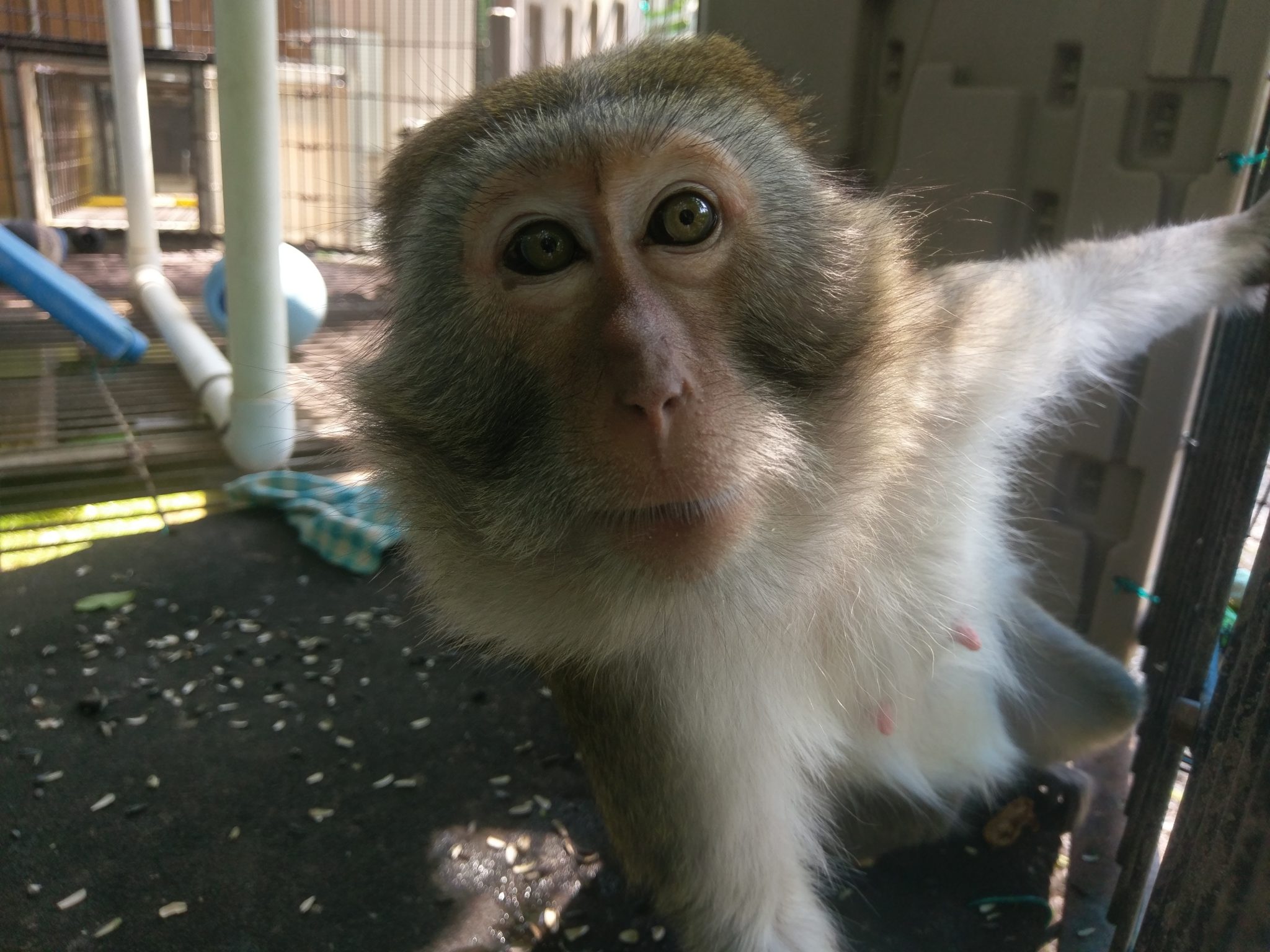 Introducing primates to one another is always a slow, delicate process. We ease them into it to ensure that both primates are ready and willing to interact with one another in a friendly manner. After all, whether raised in a private home or a research facility, they may not have seen or had contact with another monkey in years! Initially, Andi and Breanna were in separate cages that were a few feet apart. Once they got comfortable seeing each other often, we moved the enclosures closer together and connected them with a tunnel, but kept the tunnel doors shut. Then, we let them make the decision—either they would show us that they wanted to be together or not. One day, we saw Breanna and Andi reach out for one another through the tunnel, and it was clear to us then that they were ready to be introduced. We opened the tunnel door and Breanna approached Andi. Andi allowed Breanna to come up close and before we knew it they were grooming one another: success! 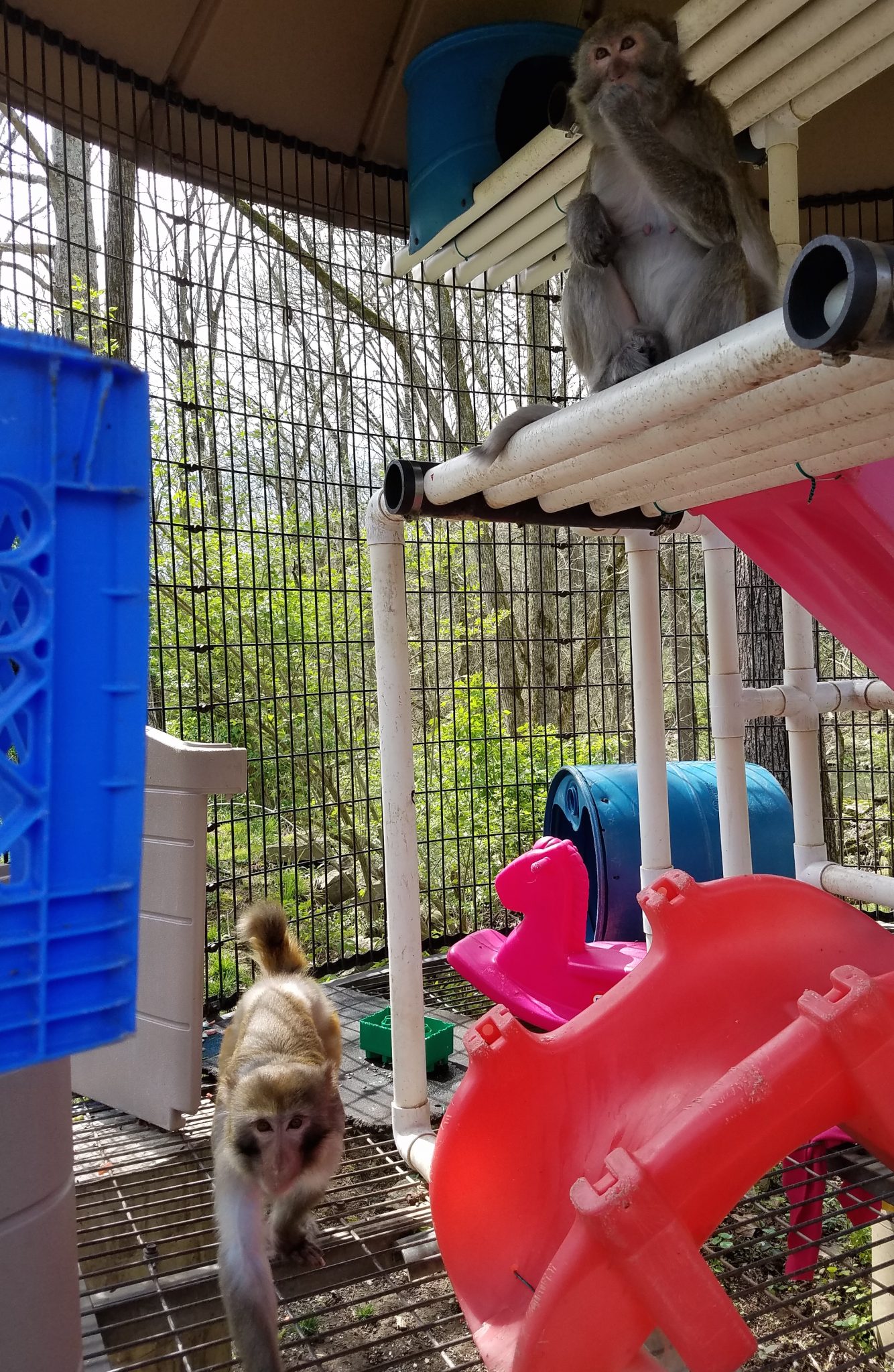 Andi and Breanna spend almost every day outside. They love the fresh air and the sun on their faces. Like many monkey couples, Andi and Breanna spend the majority of their time throughout the day apart. While Breanna munches on leftover breakfast, Andi likes to lounge on his mat and watch the water in the creek float by. It’s during the night that they come together. Breanna and Andi wait for the sun to set, then make their way inside and snuggle up to stay toasty warm.

Andi’s journey from lab subject, to roaming at-large in Bath County, to a socially-enriched life at the Primate Rescue Center is certainly astounding. The tattoo etched into his skin hints at the hardships of his past life. However, a healthy coat of hair now hides the ink and his life at the Primate Rescue Center is filled with an abundance of food and toys, the warm Kentucky sun and a beautiful monkey companion. 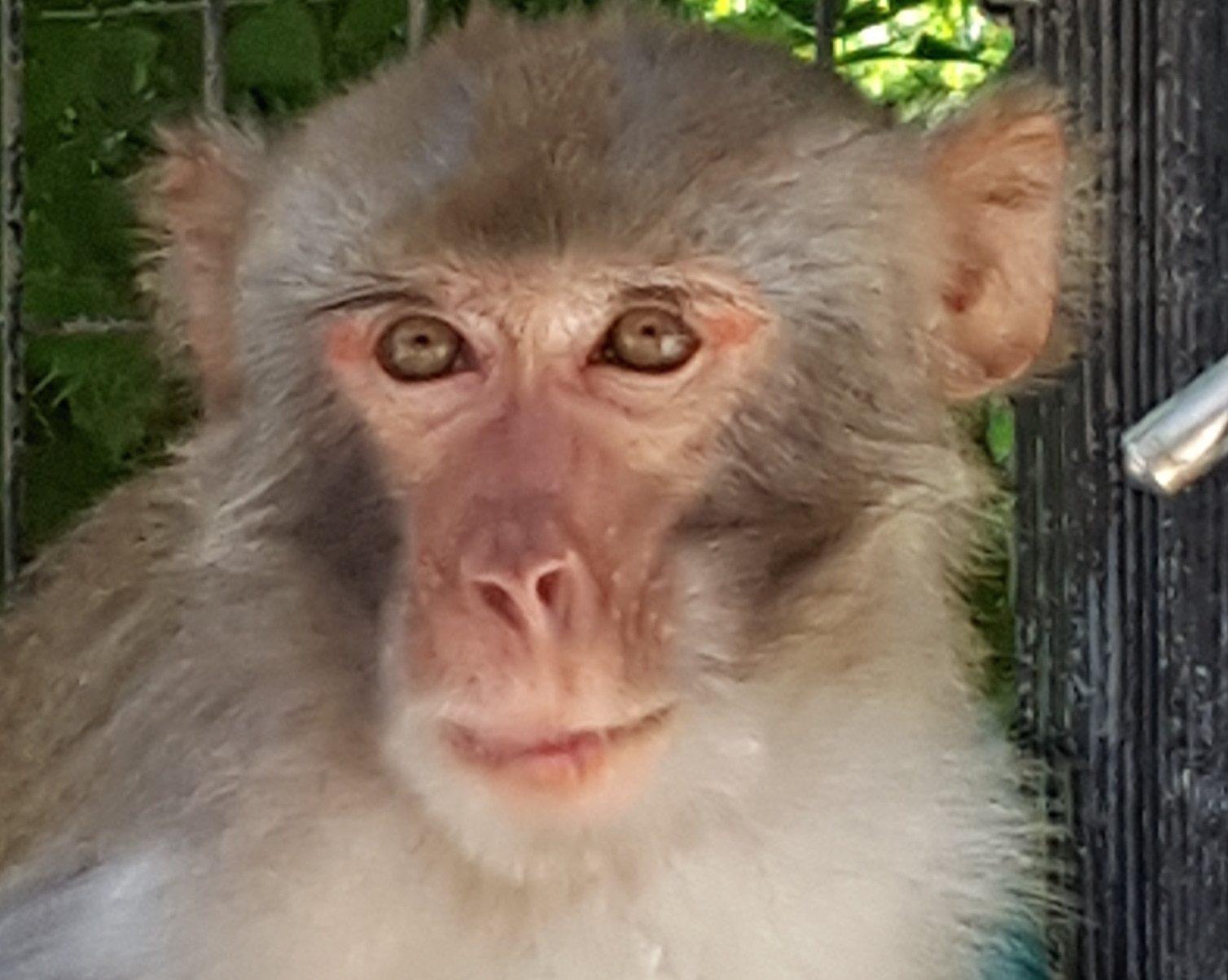