Apes and monkeys have an awareness of death, performing grieving rituals and mourning the deceased, study suggests

Non-human primates like monkeys and apes appear to have an awareness of death in the same way humans do, scientists have said. After analyzing over 200 years worth of research into how primates deal with death, they found common behaviors emerged—including carrying their dead, defending the deceased from threats and exhibiting a grief-like response.

The same year, scientists observed a chimpanzee using tools to clean the body of a deceased group member. A female sat down with the dead male and used a firm stem of grass to clean his teeth. The practice, researchers say, suggests chimps may have a more sophisticated response to death than we currently know.

Andre Gonçalves from Japan’s Kyoto University and Susana Carvalho from the University of Oxford in the U.K. say there is a huge amount of anecdotal evidence relating to they way non-human primates deal with death—but a review of the literature to find specific characteristics and behaviors has been lacking.

“For the past two centuries, non-human primates have been reported to inspect, protect, retrieve, carry or drag the dead bodies of their conspecifics and, for nearly the same amount of time, sparse scientific attention has been paid to such behaviours,” they wrote in a study published in Biological Reviews.

In their analysis of 240 reports, Gonçalves and Carvalho showed that specific responses emerge among different non-human primate species. Often this involves carrying the dead around—especially mothers and their dead babies. Species that are unable to grasp objects—such as lemurs and tamarins—are observed trying to carry their dead even though they lack the ability. 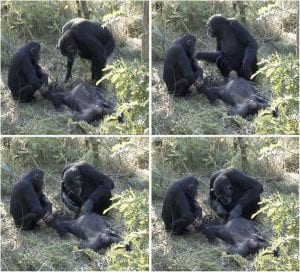 They also found that group members defend the bodies of the deceased and returning to the body or site of death: “Such places may hold residual information about the event which can arouse curiosity or emotional distress,” they wrote. This behavior tended to happen when an adult died, rather than a juvenile. The researchers speculate this could relate to attachments, with members needing to re-categorize from living to dead—a behavior they say is essential to the grieving process.

In one anecdote about a family of chimpanzees studied by Jane Goodall, a mother named Flo died before her son Flint had become fully independent. After her death, Flint would stare at the nest they shared and returned to the site of her death. He exhibited signs of clinical depression and stopped eating and interacting with other group members. Eventually his immune system became too weak and he also died.

In another case, an adult male howler monkey was observed staying close to the corpse of a female for five days after her death, “suggesting close proximity between these individuals in life.”

“Considering all these findings and given their cognitive abilities, we argue that non-human primates are capable of an implicit awareness of death,” Gonçalves and Carvalho wrote.

They say more research will be needed to confirm whether non-human primates are aware of death—and to what extent they are. “It’s not an all-or-nothing ability,” Gonçalves said in a statement. “Awareness of death includes things such as animate/inanimate distinction, or the sensory and contextual discrimination of living/dead. The concept of death is something we humans acquire between ages three to 10. We can infer that non-human primates have some aspects of death awareness but, thus far, only humans conceptualize it at a higher order.”

The researchers also say further investigation could help shed light on the evolution of our own funeral practices: “Given that there exists a considerable gap in the fossil and archaeological record concerning how early hominins might have interacted with their dead, extant primates may provide valuable insight into how and in which contexts thanatological behaviours would have occurred.” 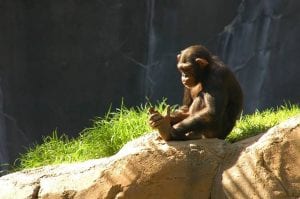