Over the summer, the PRC happily welcomed a friendly new face to the family. Opal is a 7 year old female long-tailed macaque. She was rescued from a pet situation in Indiana, thanks to the generous help from Peaceable Primates Sanctuary. Opal spent some time at Peaceable Primates adjusting to her new life of sanctuary before making her way to her forever home at the Primate Rescue Center. 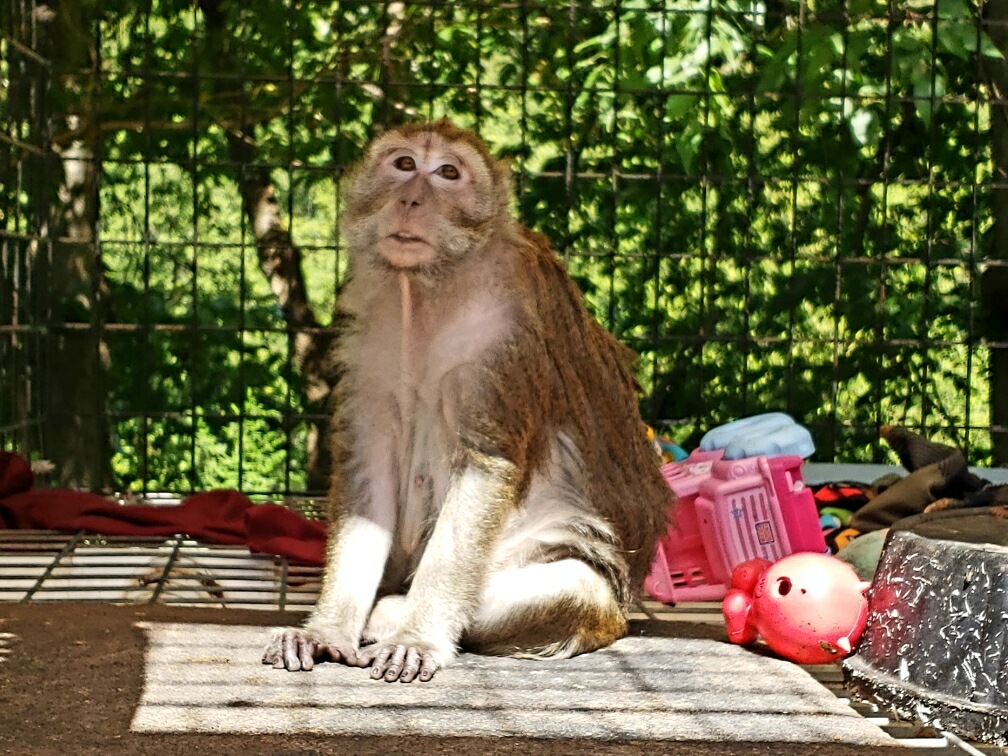 Opal is a very curious, affectionate and a pro at catching bugs! She has been adjusting to her new environment very well. She is receiving a healthy diet full of fresh fruits and vegetables, leafy greens and nuts. This balanced diet has helped Opal get to a more manageable weight that will help her to live a long healthy life. When breakfast is served, Opal loves picking out peanuts, cherries and peppers from her yummy breakfast mix. When Opal first arrived, caregivers were curious as to what Opal would think of water. We put a shallow tub in her enclosure filled with cool water and a couple of frozen cherries. She wasted no time! She made her way over and dipped her hands and feet in the cool water to find a tasty snack. 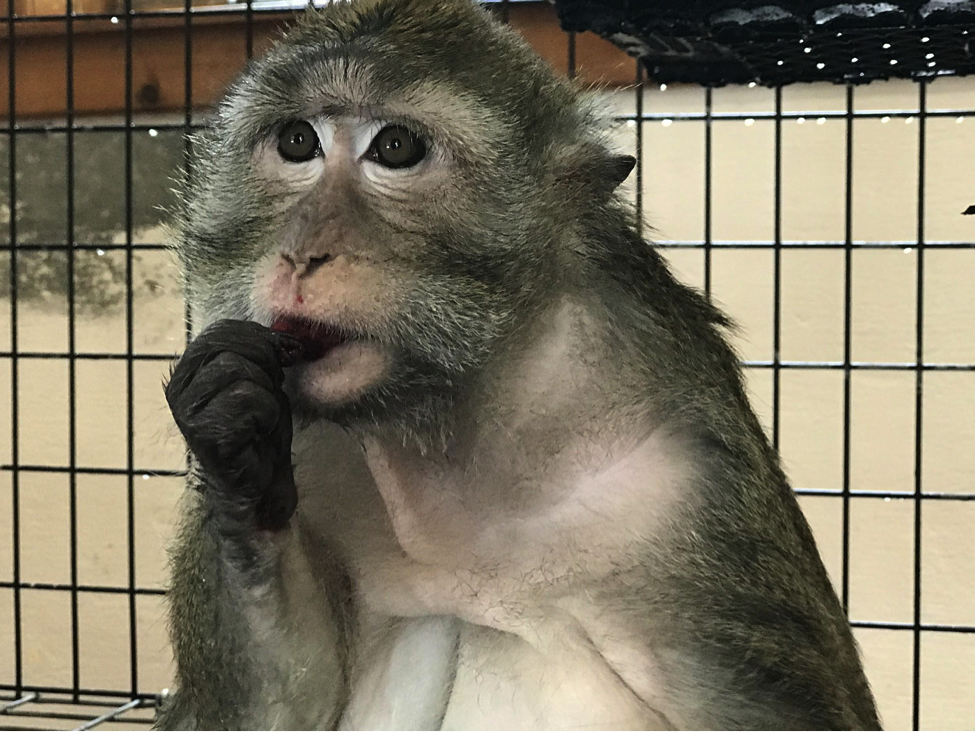 Opal munching on a cherry she scooped out of her pool.

Once we learned more about Opal and her friendly demeanor, we quickly knew that she would get along with a fellow long-tailed macaque at the PRC named Jax.

Jax was rescued from a home in Missouri. He was 18 years old when he arrived at the PRC in October of 2015 and has been enjoying his new home in peace. Jax is very handsome with a short grey beard. He is very quiet, enjoys looking at himself in his mirror, and just like his friend Opal, he too is very good at catching bugs. 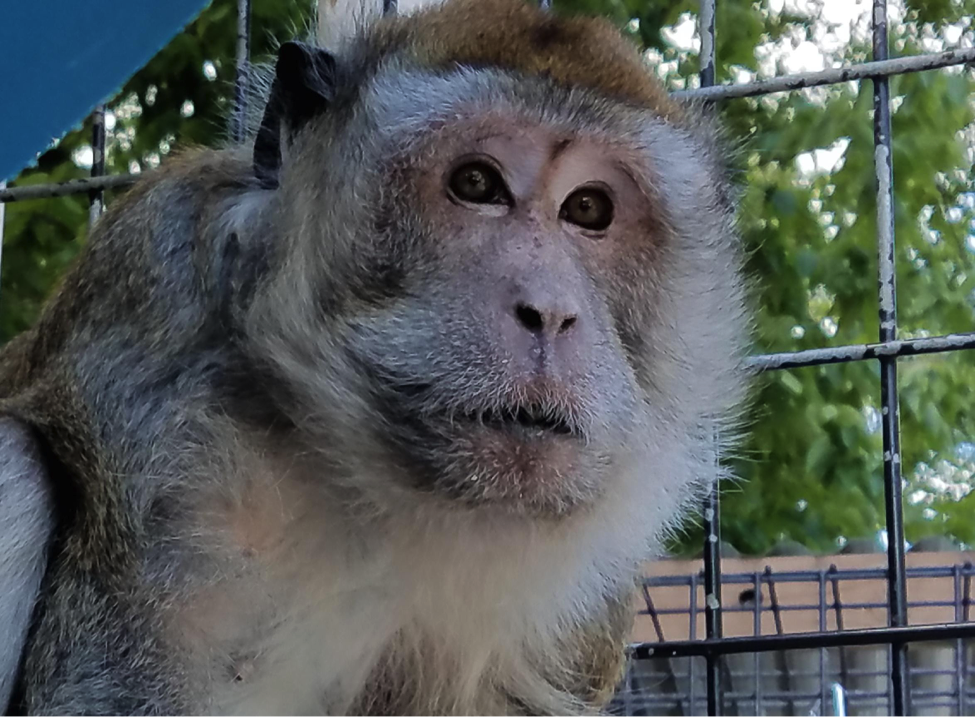 Like in the wild, long-tailed macaques are very social animals that live in large groups. Here at the PRC, we always strive to replicate the same thriving social and stimulating environment. Unfortunately when monkeys come from pet situations, they very rarely live with other primates. Not only can this lack of socialization be stressful, it can also make introducing them to another monkey confusing and intimidating.

When introducing two monkeys for the first time, it’s very important that they spend some time in close proximity in separate enclosures. This allows both monkeys to hear, see and smell one another without touching. It also helps caregivers watch for key behaviors that indicate whether they like each other, such as lip smacking, which is their way of saying a friendly hello.

Once Jax and Opal had some time near each other in separate enclosures, caregivers provided a barrier that linked their enclosures. This allowed them to be closer without yet being fully together. It didn’t take long for Jax to show Opal how sweet he is! Opal, automatically receiving the friendly gesture, quickly allowed Jax to groom her arm! Both these behaviors were good signs that both Jax and Opal would be a good match.

After some time of safely getting to know each other, Jax and Opal were officially introduced with care staff nearby…and it’s safe to say the rest is history! Both new love birds enjoy spending their afternoons relaxing in the sun, grooming one another and practicing their shared skill of bug catching! 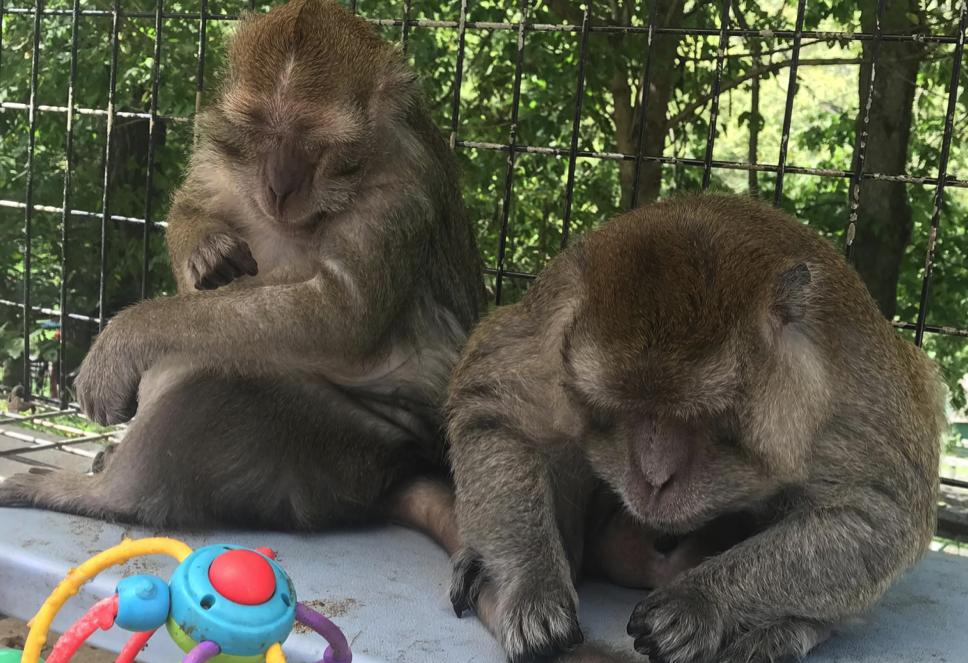 Keep up with Jax and Opal’s newly formed friendship by following us on Facebook, or make Jax or Opal your Primate Pal to receive frequent updates about them!