It’s a dazzling display of prosocial behavior among great apes. 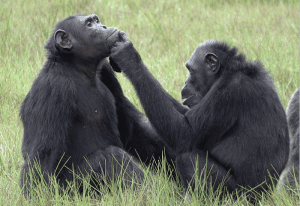 This photo shows a chimpanzee female, Roxy, applying an insect to a wound on the face of an adult chimpanzee male named Thea. Credit: Tobias Deschner.

In 2019, Alessandra Mascaro, a volunteer with the Ozouga Chimpanzee Project, was filming an adult female chimpanzee named Suzee, who was interacting with her little daughter Sassandra and adolescent son, Sia. Then, at some point, something very peculiar happened. As Suzee was inspecting a wound on Sia’s foot, the chimp mother dashed her fingers under a leaf, caught something which she put in her mouth, pressed it between her lips, then took it out of her mouth and applied it to the wound of her son’s leg.

That something turned out to be insects, part of a wound-tending behavior that turned out to be quite widespread among other members of Suzee’s group. Although Suzee wasn’t hurt herself, her actions indicate that she recognized Sia was in trouble and took action to help her son heal. It’s a remarkable display of prosocial behavior in a non-human species and a sign of empathy.

Self-medication is surprisingly common among animals

It’s not unheard of for animals to self-medicate. Birds, bees, lizards, elephants, and chimps know to ingest certain plants or use them in seemingly unusual ways when they need them. For instance, some lizards respond to a bite by a venomous snake by eating a certain root to counter the venom and baboons in Ethiopia eat the leaves of a plant to combat the flatworms that cause schistosomiasis. Amazingly, sparrows and finches collect nicotine-heavy cigarette butts to reduce mite infections in their nests, showing animals have learned to use pharmacological ingredients even in artificial environments.

But most examples of animal self-medication are documented among great apes. In 1996,American biologist Micahel Huffman first saw a parasite-ridden, constipated chimpanzee in Tanzania chew on the leaves of a noxious plant it would normally avoid. By the next day, the chimp seemed to have completely recovered.

Suzee’s family is an example of another form of self-medication. It’s the first time that researchers have seen chimps apply insects to themselves and others in order to treat wounds.

“We found out that there is a lot of research concerning self-medication, which is the use of secondary plant parts or other non-nutritional substances to medicate themselves. However, so far it was never observed that animals catch and apply insects to treat wounds and also treat the wounds of their conspecifics,” Simone Pika from the Institute of Cognitive Science at the Universität of Osnabrück told ZME Science.

After studying Mascaro’s amazing video, Pika and colleagues from the Ozouga team decided to monitor the group of chimpanzees in Loango National Park in Western Gabon for other instances of this behavior. It wasn’t easy to find and follow the chimp community, which lives in challenging environments, including forests, savanna, beaches, and swamps. “In addition, there are also forest elephants around, which can be dangerous,” Pika said.

But the researchers rose to the challenge and, over the next 15 months, documented 76 cases of chimps applying insects to wounds on both themselves and others. We don’t know yet what type of insects were applied, nor what their medicinal properties could be but Pika says “there are many studies showing that insects have antibacterial, antiviral, anti-fungal, anti-inflammatory and probably also soothing substances.”

Most likely, the insects serve to provide some pain relief. The Ozouga researchers plan on conducting more research in order to identify the insects being used, as well as document who is applying insects to whom in the chimpanzee group. In the process, they may also learn more about how this behavior first started and how it’s transmitted among the members of the group.

“We know that the majority of our adult males and many females are using the behavior, suggesting that they have learned it. Furthermore, an insect application event always creates a lot of attention in the surrounding chimpanzees, meaning they all approach and want to look at what is going on,” Pika said.

But for the researcher, the most striking thing about this study is the prosocial nature of it all. Helping, sharing, and comforting are complex social behavior that benefits others rather than ourselves, and which we generally ascribe to humans. But if these findings are any indication, we are definitely not alone.

“There are still people doubting prosocial skills in other animals besides humans and I think this example is so clear that it will finally also convince the skeptics,” Pika said.

The findings appeared today in the journal Current Biology.