My second novel, The Immortalists (Putnam, January 2018), features a scientist named Varya who performs research in primates. As the book continues, Varya becomes particularly attached to one of her subjects, a rhesus monkey named Frida. I didn’t have illusions about primate research to begin with; I was immensely disturbed by the horror stories from Harry Harlow’s lab and others. What I found, though, solidified my sense that nonhuman primate research is not only unjust for the animals but—because of species distinctions, as well as differences between animal and human diseases—not necessarily effective in producing results that translate to human beings.

Even if it were, it’s impossible to ignore the cost for the research subjects. Like me, many people are initially drawn to non-human primates because of an instinct that is born of appreciation as well as narcissism: they remind us of ourselves. As a child, I fell in love with Koko, a western lowland gorilla who learned sign language from her trainer, Penny. My most beloved stuffed animal was not a teddy bear but a baby gorilla; displaying creativity from the start, I named her Gorilla. My fascination with primates surely came, in part, from a problematic desire to anthropomorphize them, as if their value was commensurate with the extent to which they felt human.

A 2012 report from the Hastings Center, a non-partisan bioethics research institute, states that primates “are well known for their cognitive and emotional abilities. Studies demonstrate that they have mathematical, memory, and problem-solving skills and that they experience emotions similar to those of humans—for example, depression, anxiety, and joy.”

And yet we treat these majestic creatures, whose selfhood should be respected regardless of whether they can speak our language, like prisoners, perversely denying them access to the things that are more important for them. The Hastings Center reported that about 70,000 non-human primates are used for research each year in the U.S. alone, many of them captured in the wild in Asia, with another 45,000 “held or bred” for research. (A 2016 report indicates that the first number has held steady.) After the trauma of transportation in small crates, which causes immense psychological and physiological stress, the animals are funneled into research during which they are often infected with virulent disease, deprived of food or water, isolated socially or put through surgery.

Social companionship is “the most important psychological factor for most primates,” according to the Hastings report: “Federal law requires institutions to house primates in groups unless there is a justification [for] housing them alone. But a recent analysis of documents from two large facilities obtained by The Humane Society of the United States demonstrates that primates spent an average of 53 percent of their lives housed alone.” Cages are scarcely larger than the animals themselves, with little space to move around: the Animal Welfare Act’s minimum size requirements for male macaques and large African species, which can weigh as much as fifty-five pounds, is a six foot square. “Enrichment” is offered via plastic toys, mirrors, or even iPads instead of the textured, live stimulation of the wild. Behavioral torture takes place via studies that separate mothers from their children, sometimes at birth, a practice that has dire consequences for both parties; in the wild, chimpanzees, for example, live with their mothers until the age of ten.

When I finished The Immortalists, I knew I had to find a way to give back to the creatures whose plight had so moved me, and who had served as material for me: though I wasn’t a researcher holding them captive, in some way, I had “used” them, too. This time, my research brought me to primate sanctuaries, where primates can live out their lives as freely as possible. Most sanctuaries do not allow visitors, as in a zoo. Animals that were used for research or entertainment are able to experience life outside for the first time. Because of their long lifespans—rhesus monkeys like my character, Frida, can live for up to twenty-five years, while chimpanzees can reach fifty or older—even primates who have spent years in unhealthy conditions have time to recover and enjoy their freedom.

I was drawn to NAPSA because it has strict requirements that preserve the health, safety and rights of primates, which all member sanctuaries must follow. From there, I clicked on the Primate Rescue Center, which occupies thirty acres in Kentucky and is home to more than fifty apes and monkeys. Like other sanctuaries, the PRC offers ceremonial “adoptions” through which donors can fund the needs of a particular animal. Though apes have always pulled at my heartstrings, it seemed only fitting to support a rhesus monkey.

Something just felt right about Dewey. A former lab monkey, Dewey arrived at the PRC in 1997 after years of invasive experiments; in one, a catheter was used to insert narcotic drugs into his brain. At the PRC, Dewey was able to recover and socialize, connecting especially with a pigtail macaque named Crunchy with whom he groomed and cuddled. Dewey is getting on in years; born in 1987, he’s just one year older than me, an astonishing thirty in total when his species usually lives to twenty-five. It brings me comfort to know that over half of Dewey’s years have been happy ones. 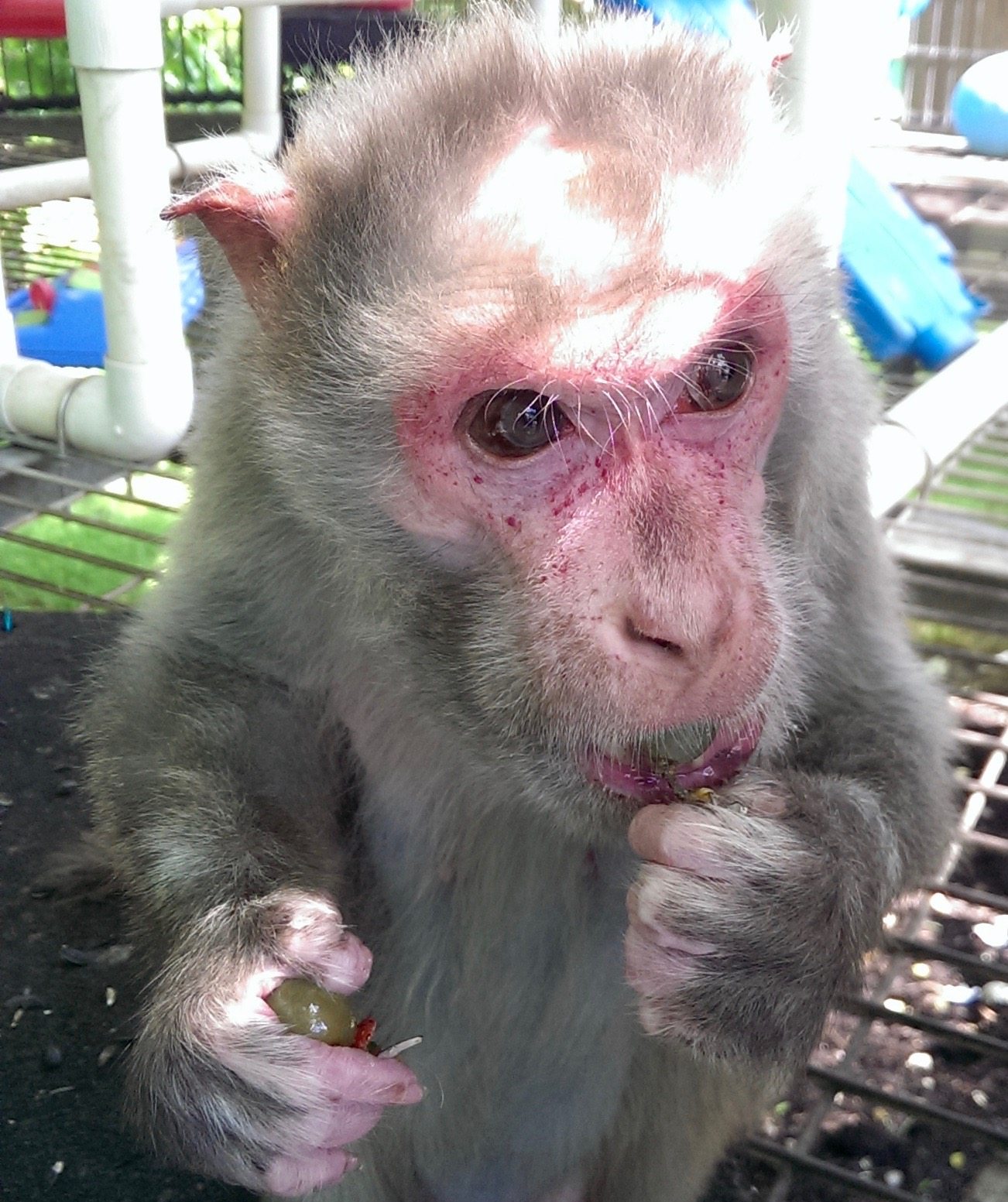 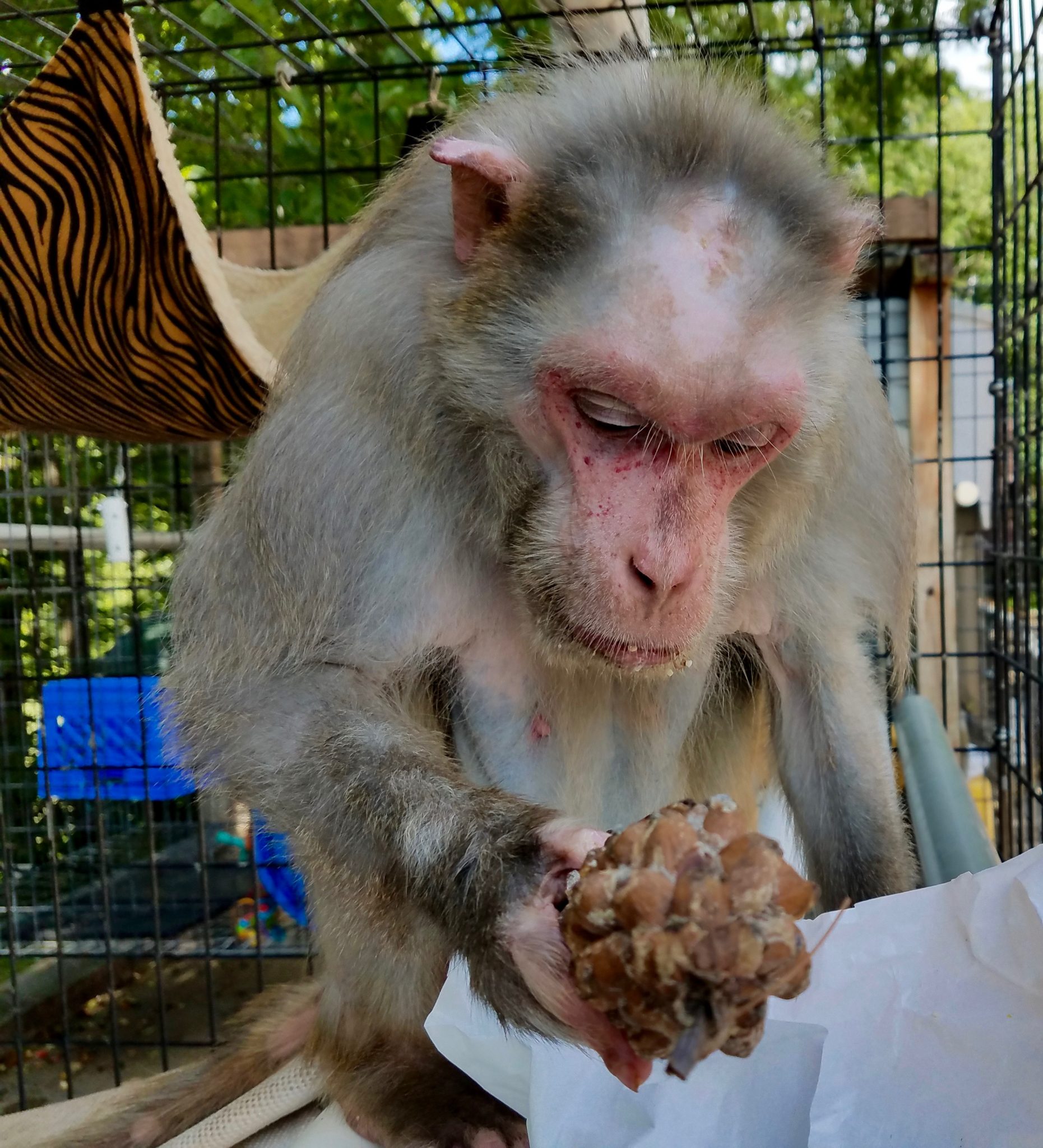 When Dewey passes on, I know I’ll continue to support primate sanctuaries. I really believe that you can’t learn more about primate research and not be moved. Writing The Immortalists opened a door into their world for me. It’s only fair that I try to open a door for them in return.