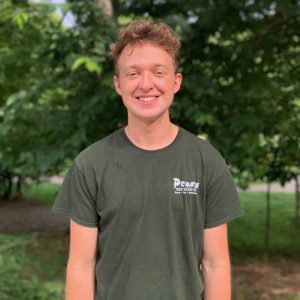 My name is Alister Brown. I interned at the Primate Rescue Center from May to September in 2021. During my time, I was able to grow close to all of the primates on the property. Since I lived in the same building as the chimpanzees, I grew especially close to all eight of them. Despite this, I still maintained a close connection to a member of my favorite primate species, Jake. 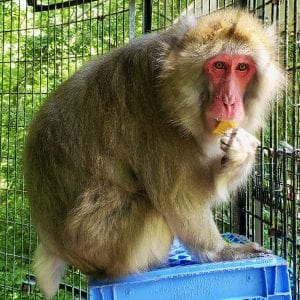 Jake is a Japanese Macaque who has been at the PRC since 2003. His past is a bit of a mystery since he was found roaming in a residential area of Cincinnati, Ohio. Jake is quite the introvert, which might be why I love him so much, but that does not prevent his personality from shining. He loves caring for his stuffed animals and foraging for snacks. On hot days, he enjoys laying about in a pool of water. This makes sense due to his thick coat of fur that is more adapted for colder temperatures than the hot, muggy summers of Kentucky. It might seem off to keep an animal that should be roaming the wilds of Japan in a cage on the opposite side of the world, but it is important to examine the environment a primate originally comes from and then noticing the importance of a parental figure, which Jake likely did not have, in surviving in that environment. 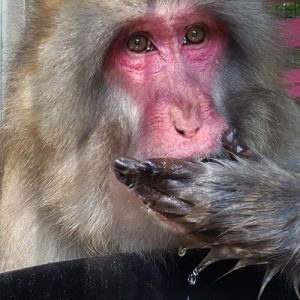 Japanese Macaques are found on three of Japan’s Islands, Honshu, Shikoku, and Kyushu (Hardman, 2011; New England Primate Conservancy, 2018). Typically, primates tend to be found in tropical environments that are closer to the equator, which means Japanese Macaques are the only primate species that are naturally found this far north, with the exception of humans. Their home ranges vary from colder deciduous forests to warmer evergreen forests (Hardman, 2018). Those in the northernmost habitats must be adapted to below freezing temperatures and deep snow cover. One of the most well-known adaptations for this is a learned behavior of warming themselves in hot springs (Hardman, 2018; New England Primate Conservancy, 2018).

They have other adaptations as well. When looking at a picture of Jake, one can notice his thick coat that would normally be more beneficial in colder environments due to its insulating ability in the winter months (New England Primate Conservancy, 2018). One physical trait that makes them stand out from other primate species is their bright red faces, which helps in determining the right mate (Roetzel, 2021). 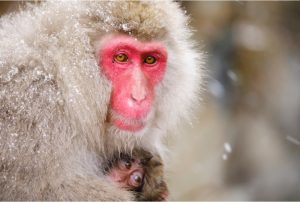 Japanese Macaque societies are fascinating. There is an alpha male that protects the group, but beyond that the dominance hierarchy follows a matrilineal line. The daughters inherit the rank of the mother, and the younger daughters tend to outrank the older ones (New England Primate Conservancy, 2018; Roetzel, 2021). It is easy to believe humans are the only species with a rich culture, but Japanese Macaques demonstrate the contrary. A perfect example is the hot springs bathing. This is a learned behavior that carries on from generation to generation. 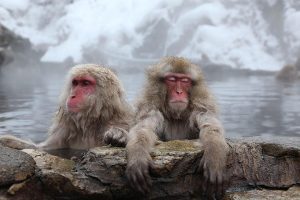 Furthermore, some Japanese Macaques have been observed making snowballs as a recreational activity (New England Primate Conservancy, 2018). During the early days of Japanese Macaque research, scientists would set up feeding stations to get closer to the primates (Yamagiwa, 2010). This would subsequently free up time for the primates, and some were found to play with rocks to fill this down time (Hardman, 2011). Some Japanese Macaques have also been found to wash some of their food, such as potatoes, and this behavior began to spread throughout the group (Yamagiwa, 2010). Japanese Macaques also have a complicated communication system that includes at least six different vocalizations to signal different mood or situational states (Hardman, 2011; New England Primate Conservancy, 2018). The culture of Japanese Macaques is beautiful and complex and needs to be protected in order for it to be passed on to newer generations.

Upon reading about the life of wild primate species, it becomes clear why it is so important to not own any primate as a pet and why the Primate Rescue Center is a fantastic place for primates like Jake to live out the rest of their lives. A majority of the primates here were not raised by their respective parental figures. In the case of Jake, we are not sure how he ended up on the streets of Cincinnati, but it is possible that someone had him as a pet and when he got too big, his owner released him because it was easier than owning up to their mistake. Since Jake was likely taken away from his mother at a young age, he was not able to learn the ins and outs of surviving in the Japanese wilderness. If he was placed back in Japan, he would not know the proper foods to forage or what animals are predators. Releasing any primate that was taken from their mother at a young age back into the wild, is a death sentence. Until the pet trade of primates can be completely eliminated, sanctuaries like the Primate Rescue Center are essential for housing primates like Jake to be taken care of by people who genuinely care for them and to give them the best life they can given the circumstances. 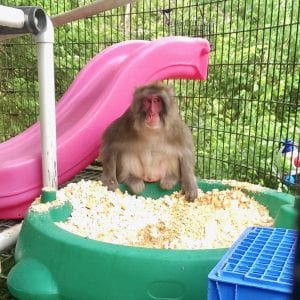 Make a difference in Jake’s life by becoming his Primate Pal today!