Most species of primates who live in social groups follow dominance hierarchies. Hierarchies establish rank between members of a group. Higher-ranking members have better access to resources and more power within the group. The leader, or alpha, of a social group is selected based on a variety of factors. Alphas must be able to win agonistic encounters; they need to have good survival skills and knowledge of resources, an agreeable demeanor and are often times the most physically attractive to other group members. At the PRC, there are nearly 15 functioning social groups of primates. Each group has carefully selected their leader, some of whom are showcased below.

Donald is the alpha male of the chimpanzee group, which is made up of three older individuals (Donald, Zulu and Victoria) and six younger individuals (Martina, Noelle, Jenny, Ike, Rodney and Cory). Just having celebrated his 42nd birthday, he is considerably older than the other males, who are in their early twenties. Donald’s size and age gives him an advantage over the younger boys and he automatically became alpha when the groups met in the summer of 2000. For the most part, Donald is a peaceful leader, and runs the group with a stoic and poised attitude. He is a true gentleman, and takes good care of Zulu and Victoria, the older gals. He also has strong relationships with the “kids,” and spends time every day playing and grooming with them. He exerts his authority by intervening during fights or by pairing with the most desirable females. On rare occasions, when he becomes upset, his intimidating displays are enough to warn anyone to back down. Any issues are resolved soon after thanks to Donald’s willingness to reconcile. 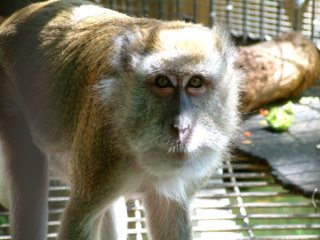 As is common in most long-tailed macaque groups, Toby is the only male and shares his enclosure with two long-tailed macaque females, Tonya and Zoe. Much like Donald, Toby is a gentle and kind leader. His cage mates adore him and it is not uncommon to find the three of them snuggled up together on a chilly day. Although he is quite fair and agreeable to his girls, he asserts his dominance through food and resource access. He is always fed first and he often persuades the girls into giving him the most valued food items, like grapes or banana slices. 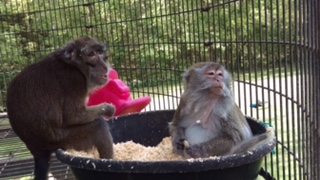 Known as the “parents” of their group, Luke and Ciera are housed with young rhesus macaque Rainey and long-tailed macaque Carlos. The four of them function much like a stereotypical family—Ciera, the mother, watches over the young kids, Carlos and Rainey, while Luke, the father, protects them all with his intimidating displays and patrols of the enclosure. Luke and Ciera partition out responsibilities and power between one another, and both have strong relationships with the young kids. 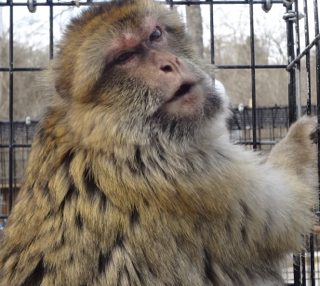 Saidah is a stout and tough lady. She is housed with young rhesus macaque George, and acts as a mother figure to him. Most days, Saidah and George spend the afternoon relaxing in their barrels, munching on leftover breakfast or fiddling with new enrichment. George is a rambunctious and energetic little guy, and Saidah is very tolerant of his rowdiness. Like most mothers, Saidah is teaching George how to properly behave and from time to time, she reprimands him with subtle open-mouth displays, a warning sign many primates use for intimidation. As he discovers new pieces and parts of the world, Saidah often comforts George when he becomes upset or frightened, snuggling up to him and grooming with him. She is another one of the Primate Rescue Center’s outstanding leaders.