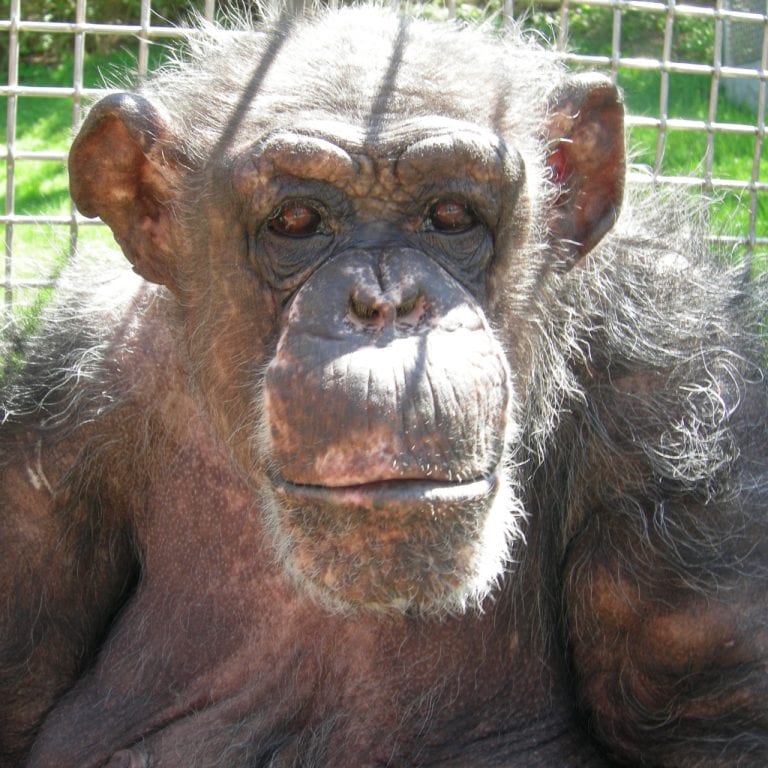 Donate in Memory of Hazel

Sweet and gentle Hazel, alpha female and the eldest of the group, passed away quietly in her sleep after fighting complications related to her diabetes. Hazel was most likely caught in the wild, as this was how captive chimpanzees were typically acquired in the 1960s and early ‘70s. We don’t know her exact birth date; however, we estimate Hazel was 47 years old at the time of her passing. Her years as a young chimp are mostly a mystery. A former owner shared that Hazel was originally purchased by a circus and was housed in a small box on top of a tiger cage! Because of her stubborn nature, Hazel failed to perform for her trainers and was therefore sold to a private individual in Ohio, and then later moved to Dahlonega, Georgia. Raised like a human child for a time, she was generally docile and easy to please as long as she was well fed. But once Hazel and her four companions—Debbie, Donald, Victoria, and Zulu—became too large and difficult to handle, they were moved to a concrete bunker in the backyard where they were forced to survive with no fresh water, improper nutrition, and poor ventilation. Upon their rescue nearly two decades later by the PRC, all of the chimps were found in poor health, and it was determined that Hazel was diabetic.

After arriving at the sanctuary, our veterinarian and team of caregivers set to work getting Hazel’s diabetes under control. Fortunately, we found that Hazel was a lover of fresh vegetables and fruits and therefore getting her blood sugar in check with a proper diet along with medication was successful. Hazel struggled with her weight and mobility; however, she finally had a place to live where she could roam outside and nap in the sunshine anytime she pleased.

Hazel also played a significant role in facilitating the introduction of the adult chimpanzees to the seven young chimps who had already been rescued from a biomedical research lab and living at the sanctuary. She was so nurturing towards all the chimps but was especially fond of our young and rowdy Cory. Once the other adults from Dahlonega witnessed Hazel’s warmth, they were no longer suspicious of these unruly juveniles, and the introduction occurred without incident. The two groups have lived together in one troop ever since.

The bonds between Hazel and her friends Victoria, Zulu ad Donald remained strong through the years. The girls were never far from each other’s sides and always looked to Donald for support and guidance. As Hazel grew older and less energetic, she could usually be found snuggled up in one of the night room hammocks or sitting near Victoria snacking on veggies in the outdoor enclosure tunnel. Despite her mobility issues, Hazel could occasionally be found outside on sunny days perched atop one of the outdoor enclosure platforms high above the ground, looking out through the trees or surveying the sanctuary grounds.

Although is has been difficult adjusting to life at the PRC without Hazel, we are comforted by the fact that the last decades of Hazel’s life were full of fresh air, sunshine, nutritious food, and many, many friends and companions who loved her very much. 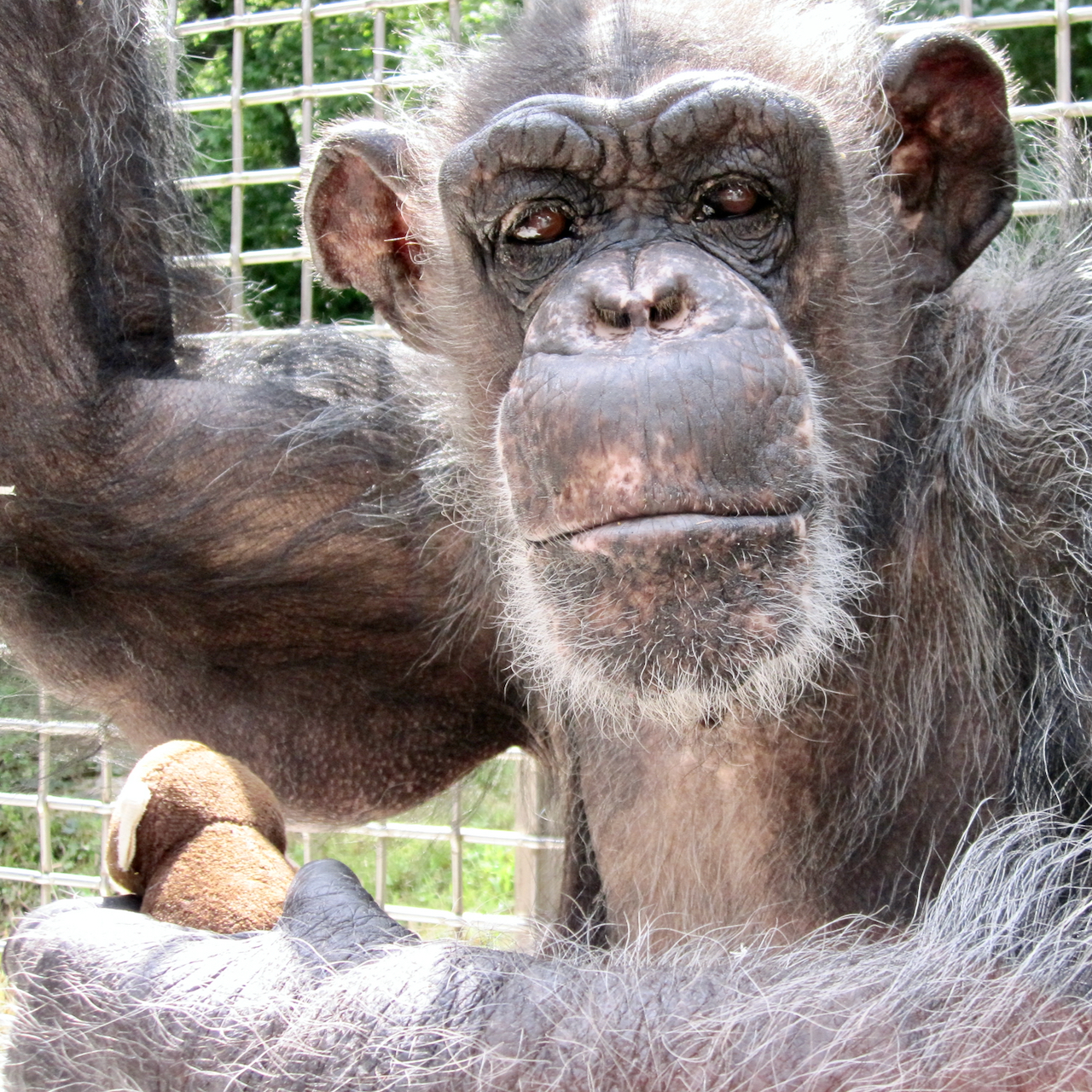 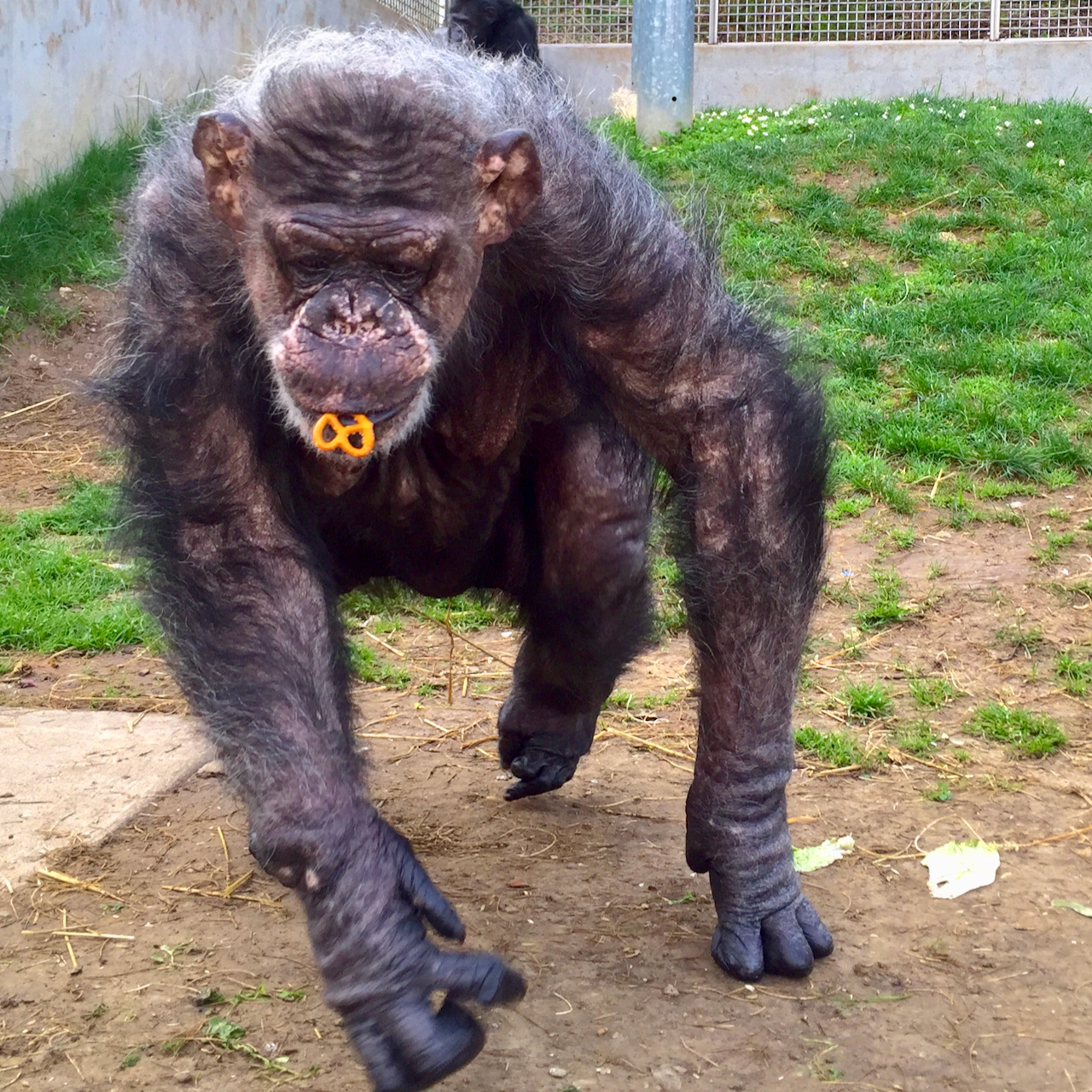 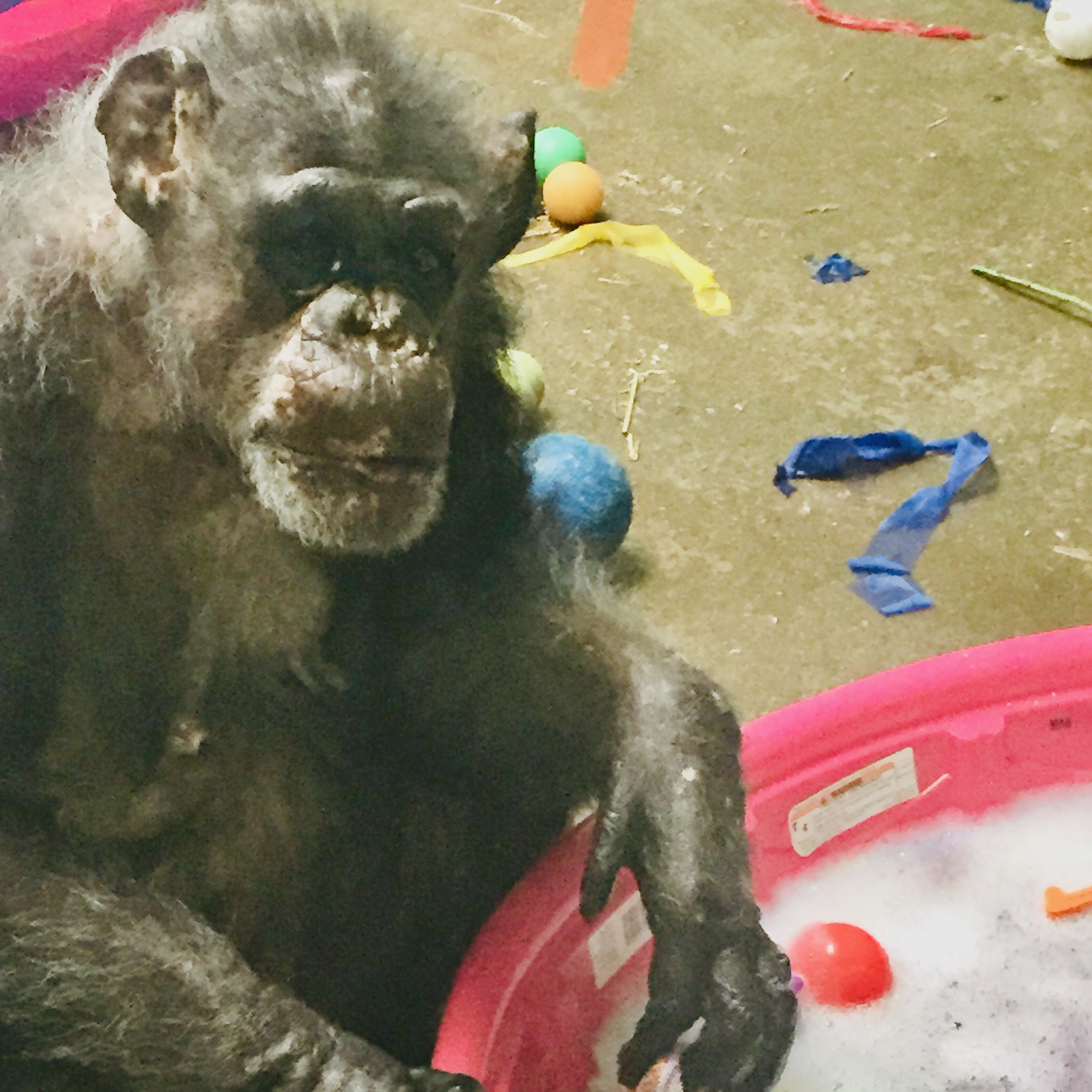 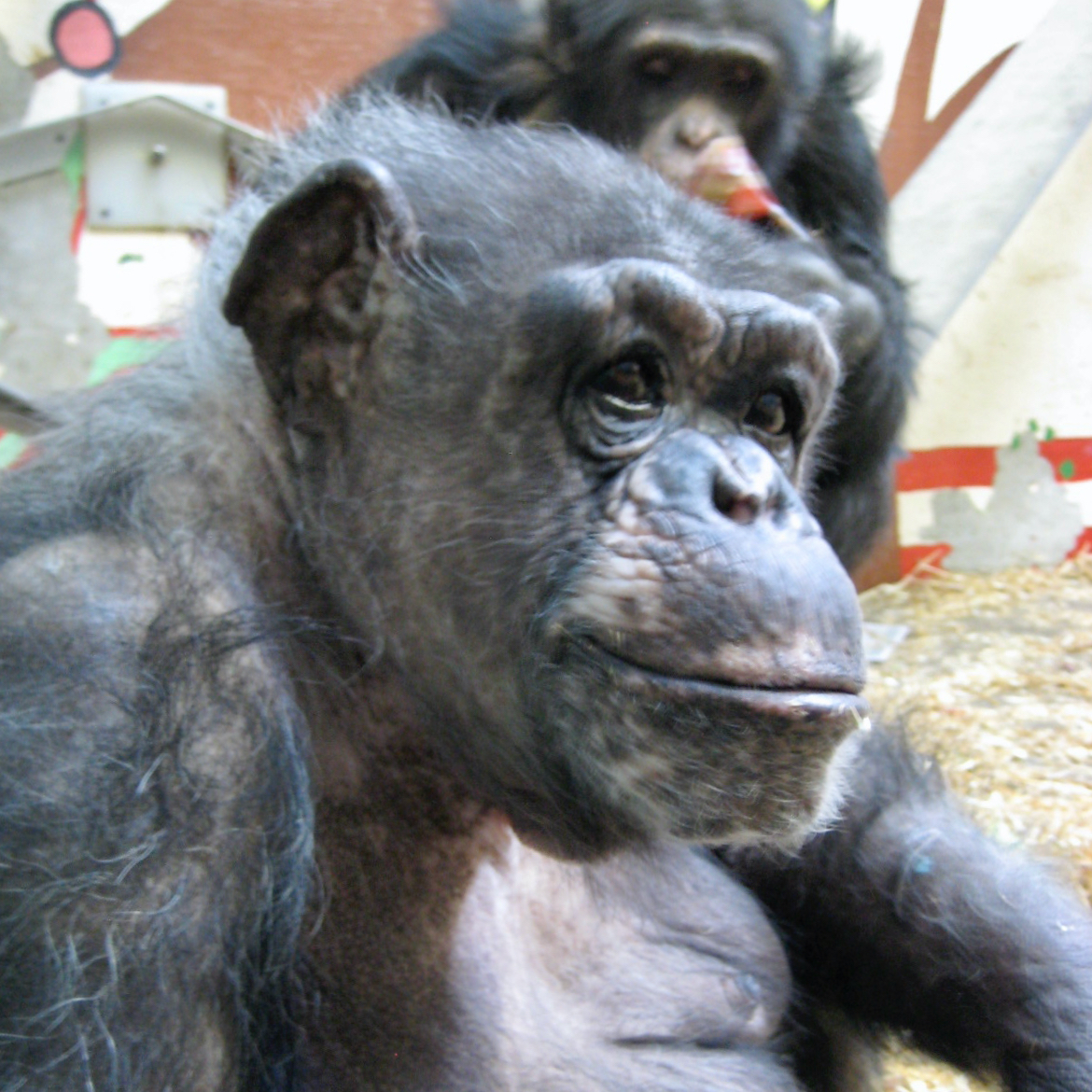 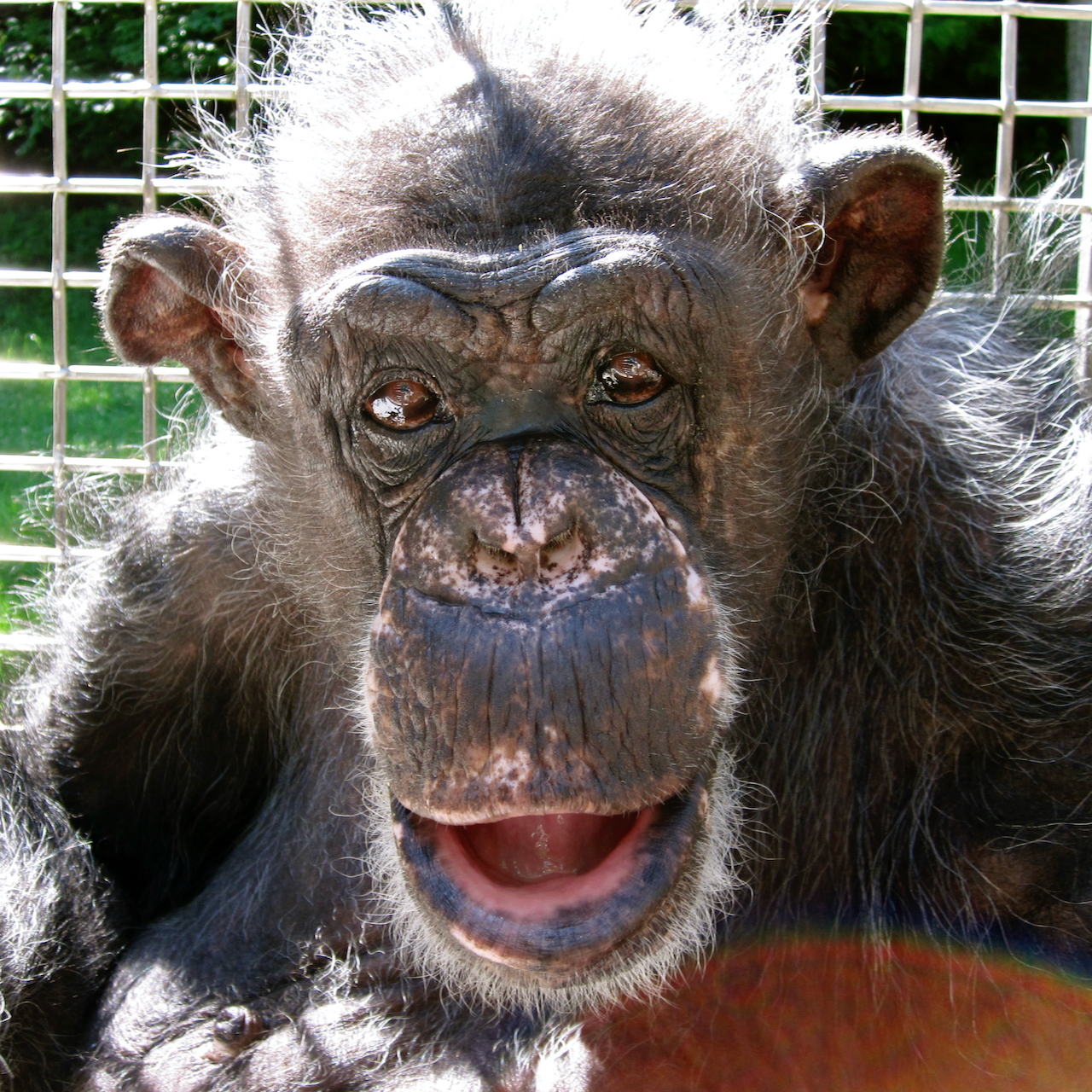 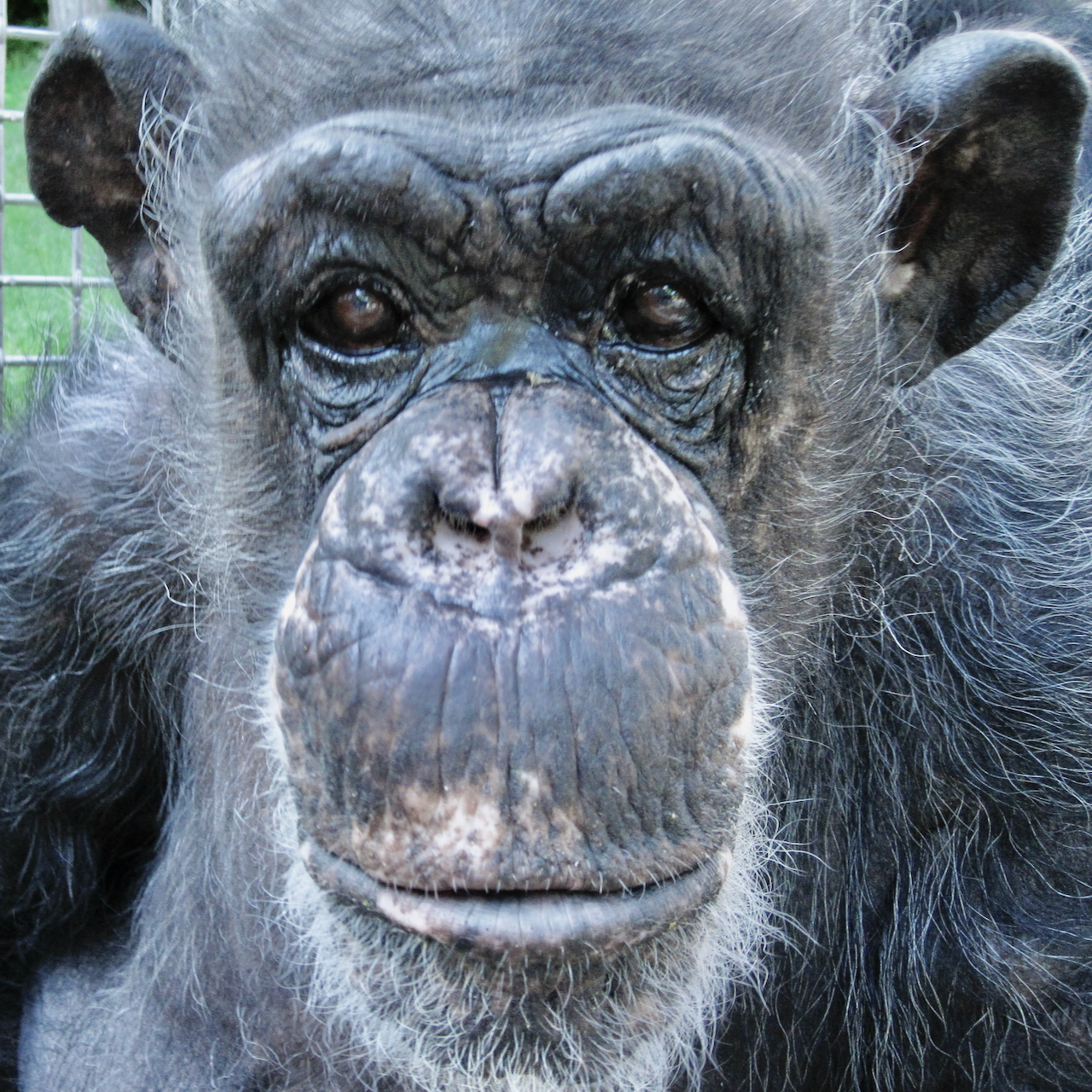 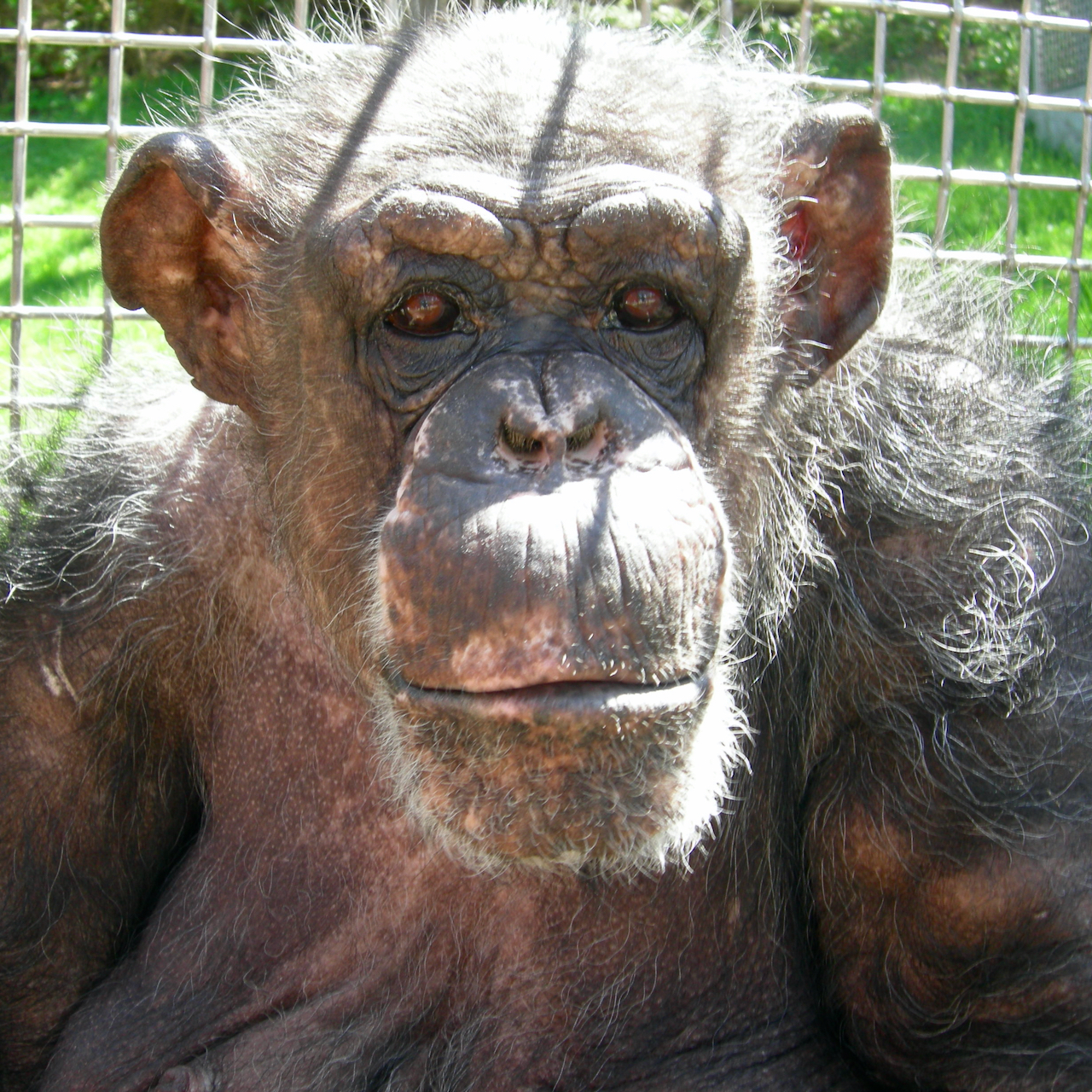 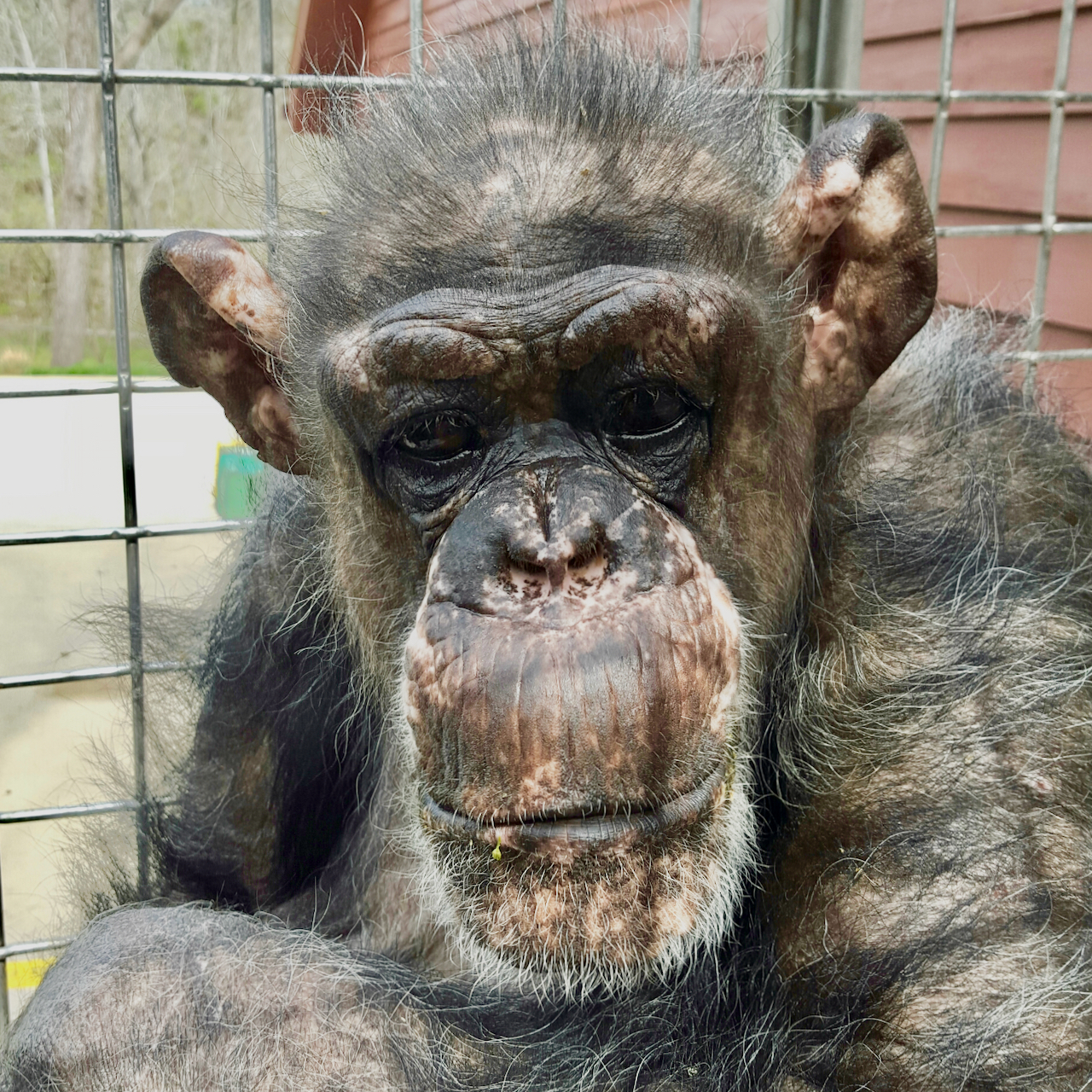 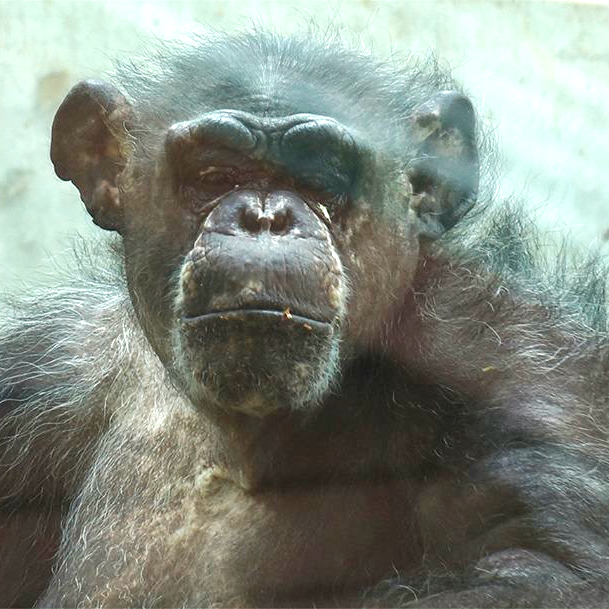 END_OF_DOCUMENT_TOKEN_TO_BE_REPLACED

We Miss You, Hazel!

Hazel passed away in 2016 due to complications of diabetes at an estimated age of 47 years old. Beautiful Hazel left us on the morning of May 25th in her sleep, leaving behind her legacy of relishing life's comforts after surviving a dark and terrible past. Hazel...

END_OF_DOCUMENT_TOKEN_TO_BE_REPLACED 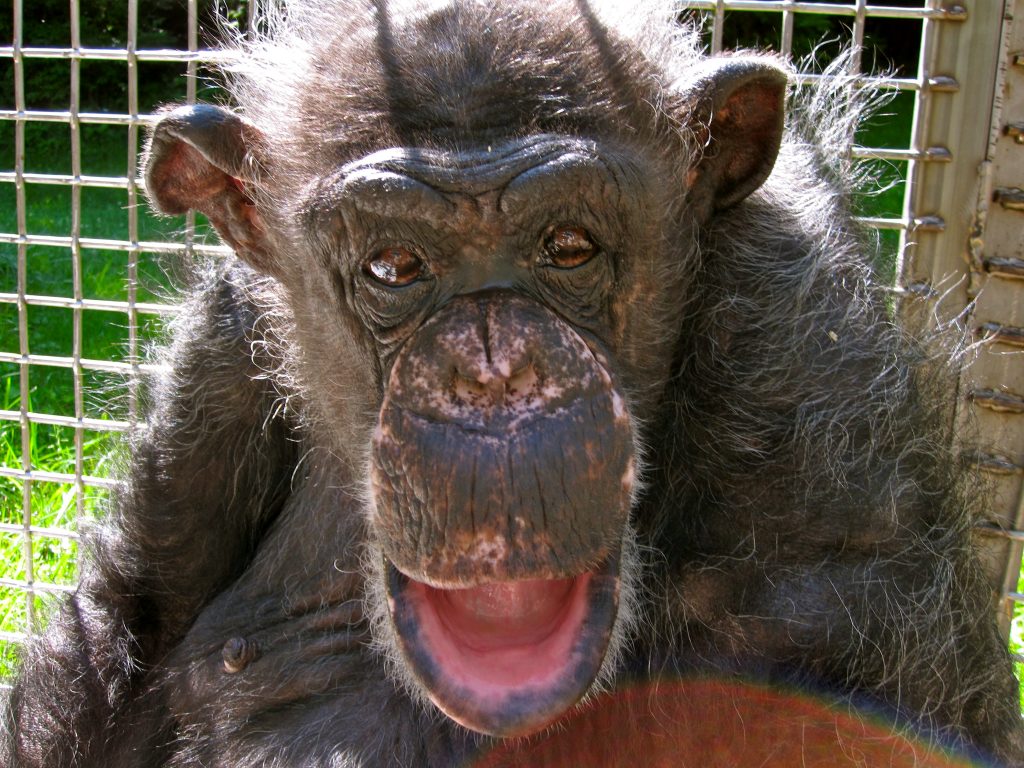 Celebrating our Beloved Friends: How we pay tribute to chimps who have passed away.

The hardest part of caring for animals is having to say goodbye to them. When we take this job we know that death is an inevitable part of it, but that knowledge doesn’t make it any easier. Over the last year we have experienced our first chimp losses, which were...

END_OF_DOCUMENT_TOKEN_TO_BE_REPLACED

Many of our chimps build nests out of the materials we give to them, such as newspaper, magazines, cardboard boxes, and burlap sacks. Two of our chimps Hazel and Pozna, are expert nest builders who can build a nest out of pretty much anything, and make it look...

END_OF_DOCUMENT_TOKEN_TO_BE_REPLACED 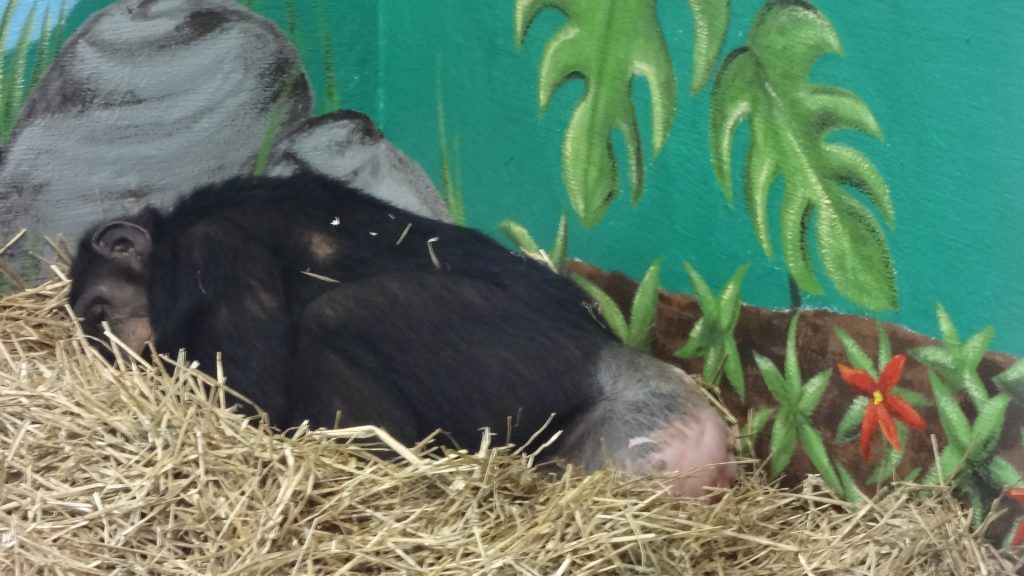 We first learned about the five chimpanzees living in the hills of northwest Georgia in the summer of 1997. Kevin Ivester, a former board member of the Simian Society of America, explained that little was known about the animals because the owner kept to herself....

END_OF_DOCUMENT_TOKEN_TO_BE_REPLACED 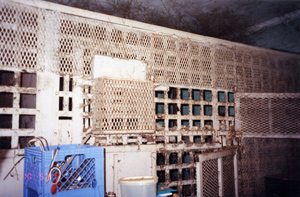