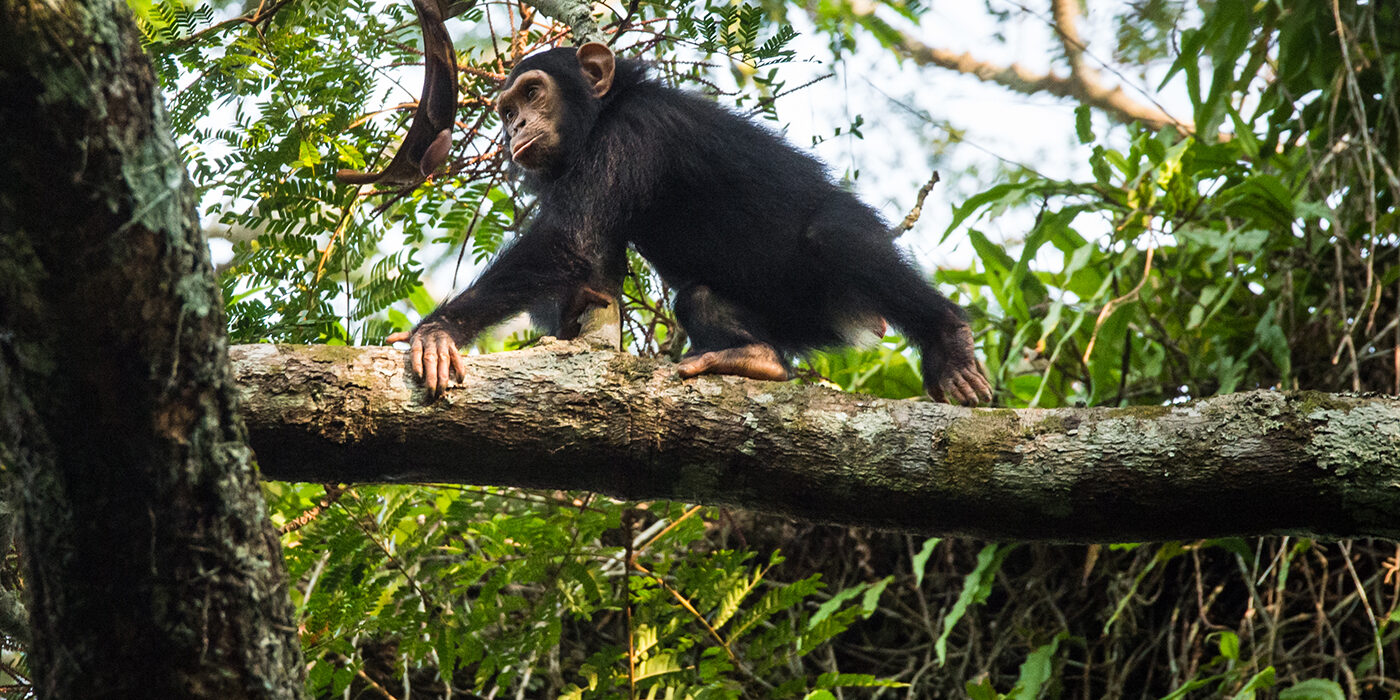 Juvenile chimpanzee in the Nouabalé-Ndoki National Park in the Republic of Congo. (Photo: Kyle de Nobrega)

A long-term study led by primatologist Crickette Sanz at Washington University in St. Louis reveals the first evidence of lasting social relationships between chimpanzees and gorillas in the wild.

Drawn from more than 20 years of observations at Nouabalé-Ndoki National Park in the Republic of Congo, researchers documented social ties between individual chimpanzees and gorillas that persisted over years and across different contexts. The research was conducted by scientists from Washington University, the Wildlife Conservation Society, the University of Johannesburg (South Africa) and Lincoln Park Zoo (Chicago) and is reported in the journal iScience.

“There are few (if any) studies of interactions between primate species that have been able to take the identity of individuals into account,” said Sanz, a professor of biological anthropology in Arts & Sciences. “It has long been known that these apes can recognize individual members of their own species and form long-term relationships, but we had not known that this extended to other species.

“An example of what we found might be one individual traveling through a group of the other species to seek out another particular individual,” she said. “We were also able to document such interactions over time and in different contexts in this study.”

Most people do not realize that the majority of remaining gorillas and chimpanzees reside together.

The large tracts of forest in the Congo Basin are a conservation stronghold not only for these two kinds of endangered great apes but also forest elephants, leopards and many other species. The government of the Republic of Congo and the Wildlife Conservation Society have worked together for nearly three decades to save wild places that sustain the local people, protect natural resources and buffer global climate change. 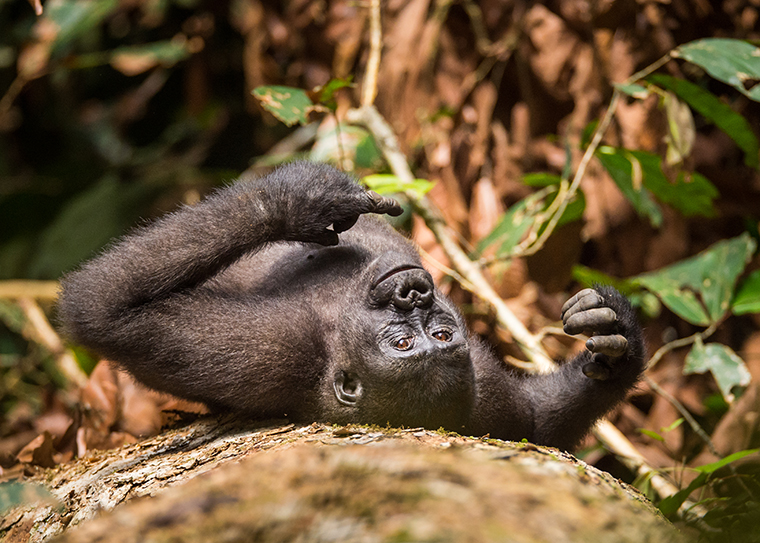 In a review of published reports combined with a synthesis of previously unpublished data about daily follows of chimpanzees and gorillas from 1999 to 2020 in the Goualougo Triangle, scientists documented ape species engaging in a wide range of social interactions, ranging from play to aggression. Researchers investigated several possible benefits of these interspecies rendezvous, including protection from predation, improved foraging options and other social benefits from information sharing.

What they learned shows us that no ape is an island. “Rather than thinking about chimpanzees alone, we should be thinking about them within diverse and dynamic habitats where they are actively engaging with other species and play an integral role in the persistence of the unique ecosystems in which they exist,” said co-author David Morgan, research fellow at Lincoln Park Zoo.

Why interact at all

One of the key theories that has been suggested for why apes might choose to associate with members of different species is to avoid predators.

But information gathered in this study suggests these social interactions can’t be chalked up to threat reduction. The scientists found little support for the idea that chimpanzees or gorillas are associating to decrease leopard, snake or raptor predation attempts.

“Predation is certainly a threat in this region, as we have cases in which chimpanzees have been killed by leopards,” Sanz said. “However, the number of chimpanzees in daily subgroups remains relatively small, and gorillas within groups venture far from the silverback who is thought to be a protector from predation.” 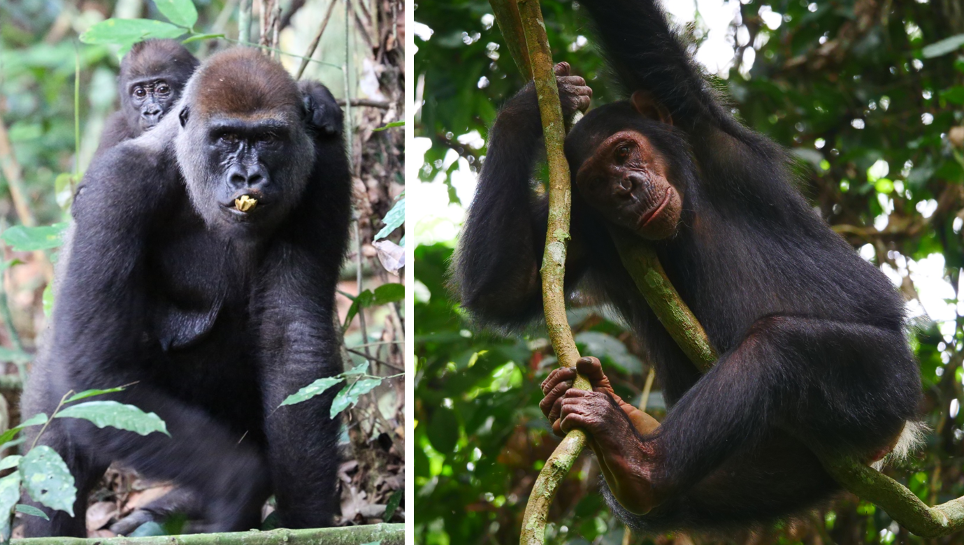 Western lowland gorillas (left) and chimpanzees (right) are the focus of this study, but they are only two of the many species that live in the Congo Basin and require conservation action. (Photos: Sean Brogan)

Instead, enhanced foraging opportunities seem to be more important. The researchers found that co-feeding at the same tree represented 34% of the interspecific associations that they documented, with another 18% of observations involving apes foraging in close spatial proximity but on different foods.

At least 20 different plant species were targeted by apes during co-feeding events in this study, greatly expanding researchers’ knowledge of the diversity of resources that chimpanzees and gorillas are willing to gather together to share.

In addition to a greater diversity of interactions than previously documented among sympatric apes, this study revealed social relationships between members of different species that persisted over years.

For example, study authors noted that on several occasions at food sources, they observed young gorillas and chimpanzees seeking out particular partners to engage in bouts of play. These types of interactions may afford unique development opportunities that extend the individual’s social, physical and cognitive competencies.

Scientists conduct daily follows with chimpanzee and gorilla social groups in the Goualougo Triangle (Nouabalé-Ndoki National Park in the northern Republic of Congo). These chimpanzees and gorillas have been followed and individually identified by researchers for more than 20 years. (Photo courtesy of Goualougo Triangle Ape Project)

“No longer can we assume that an individual ape’s social landscape is entirely occupied by members of their own species,” said co-author Jake Funkhouser, a doctoral candidate of biological anthropology at Washington University. “The strength and persistence of social relationships that we observed between apes indicates a depth of social awareness and myriad social transmission pathways that had not previously been imagined. Such insights are critical given these interspecies social relationships have the potential to serve as transmission pathways for both beneficial socially learned cultural behaviors and harmful infectious disease.”

Certainly, social exchanges between apes have their risks. One is the potential for disease transmission. While poaching and habitat loss still represent the largest threats to apes, infectious disease has recently emerged as a threat of similar magnitude.

Because chimpanzees and gorillas are closely related, many pathogens can be transmitted between them. Ebola, for example, is a highly transmissible virus that has had a devastating impact on ape populations in central Africa. Just over 20 years ago, Ebola emerged in wild ape populations and then spread to humans. By some estimates, that wave of the Ebola virus wiped-out one-third of the world’s chimpanzees and gorillas.

“While we continue to be concerned about many disease risks, we now know much more about the origin of many of these pathogens and routes of their transmission within and between species, including humans,” Sanz said.

In this study, “the surprise to us was the extent of overlap and interaction that occurred between these apes that was previously not recognized or reported,” she said. “Based on the literature, we had anticipated that the apes would avoid one another … and in some cases, it seemed to be the opposite.” 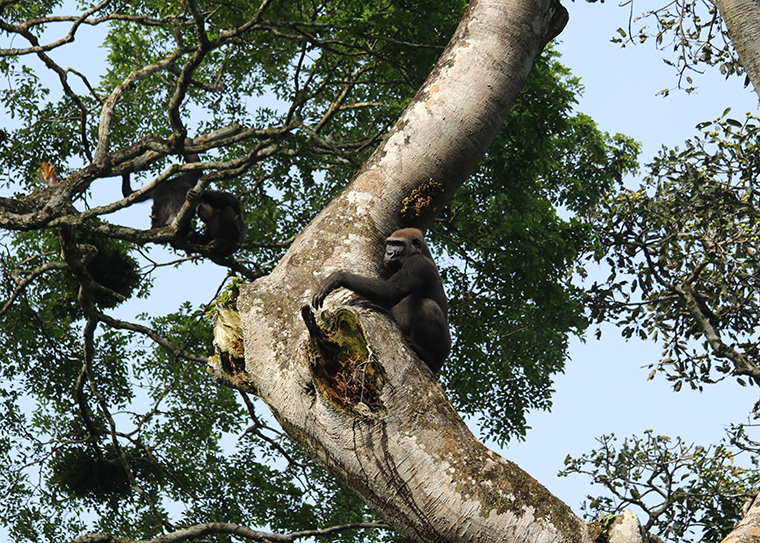 In the Goualougo Triangle, chimpanzees (left) and gorillas (right) were observed to associate in the same tree as well as feed together on the same food sources, play together and socially interact in other ways. (Photo: Sean Brogan) 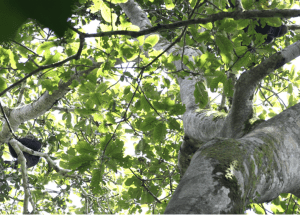 Social relationships between chimpanzees (left) and gorillas (right) have the potential to serve as transmission pathways for both beneficial socially learned cultural behaviors and harmful infectious disease. (Photo: Crickette Sanz) 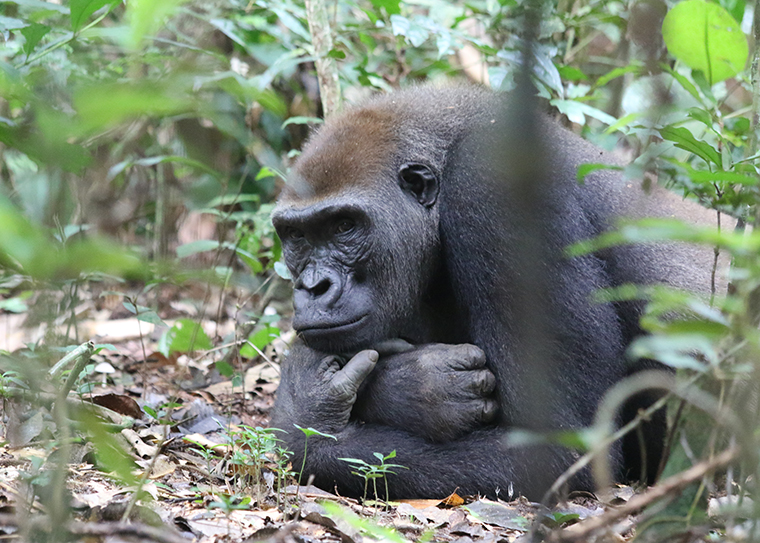 Young subadult and blackback gorilla males were observed to share the strongest social relationships with chimpanzees. The potential importance of young gorilla males in transmitting information and disease between species is surprising. (Photo: Sean Brogan)

Studying co-existing great apes may inform us about interactions between some early hominins, study authors said.

There has been a long history in paleoanthropology of assuming that early hominins would competitively exclude each other from using the same resources in the same areas. But if modern-day observations with non-human apes are informative about the behavior of early modern humans, then this study suggests these interactions would have most likely occurred in tolerant social contexts. 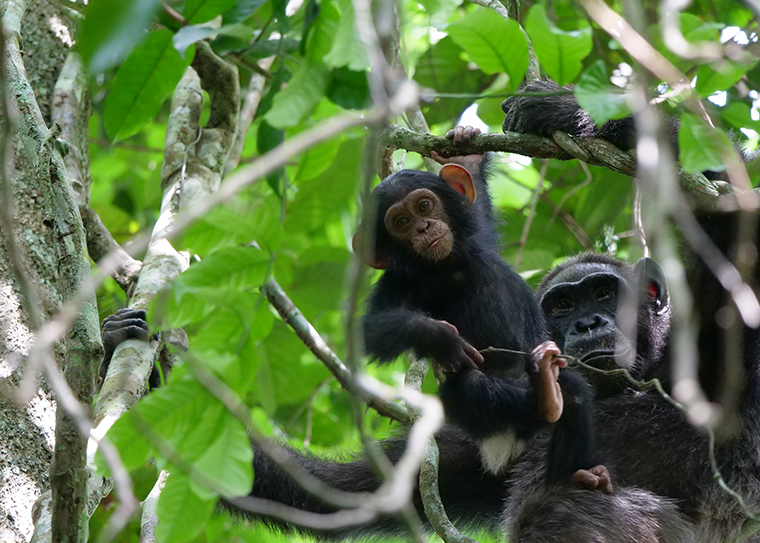 Sanz emphasizes the continuing importance of longitudinal studies to understand chimpanzee and gorilla behavior and ecology — but also to protect these apes and their habitats.

“Despite more than 60 years of chimpanzee and gorilla research, there is still much to be learned about these fascinating apes — the main challenge at this time is to ensure the conservation of these endangered species so that such opportunities exist for future generations,” she said.