In 1996, New York University made the decision to close down the Laboratory for Experimental Medicine & Surgery in Primates (LEMSIP), which at the time housed nearly 200 chimpanzees and an even larger number of monkeys. All the animals needed to be relocated, and quickly. Primate sanctuaries throughout North America rallied to help, but available space was scarce, and funding for the chimps’ continuing care even scarcer.

At the time, the Primate Rescue Center housed several dozen monkeys. Our reputation of providing high-quality lifetime care attracted the attention of Dr. James Mahoney, then acting director of LEMSIP, who was scrambling to find placement for as many chimpanzees (and other primates) as possible. 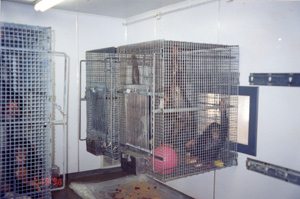 He approached us with a pressing inquiry: “How many chimpanzees can you make room for?” Explaining that we had neither the housing nor the experience to accommodate chimpanzees, we agreed instead to make room for some baboons and macaque monkeys. Naturally, there was no funding for their transportation, so PRC executive director April Truitt and her husband, Clay Miller, made plans for the 1,500-mile round trip to Tuxedo, NY.

It was probably no accident that, after touring some of the adult chimpanzee holding areas, Truitt and Miller were invited to the LEMSIP nursery to “meet a few of the babies.” There they were introduced to several of the care staff, then brought to the “playroom” to meet Cory, Pozna, Martina, and several of their buddies in the peer group. They were all under the age of 5, and several were just babies—between 1 and 2 years old. Certainly, they were captivating, but they were chimps—chimps who would grow to be very large and could live 60 more years!

The couple spent several hours interacting with the chimps, then bid them farewell. Heading back to Kentucky, they discussed the amazing creatures they’d met. But they agreed that their experience with monkeys had not prepared them to care for chimpanzees. 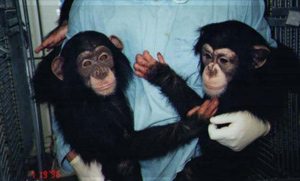 Not long after arriving at home, Dr. Mahoney called with some unsettling news: many of LEMSIP’s youngsters were going to be shipped to the Coulston Foundation, a New Mexico-based toxicology laboratory whose abysmal record of animal care and flagrant violations of the Animal Welfare Act had made it a ready target for animal-protection activists for nearly a decade.

With only a brief window in which to make alternate arrangements for them, Mahoney asked if the Primate Rescue Center had room for a few of these chimpanzees. Staff meetings were called, family discussions were held, and chimpanzee experts were consulted. Ultimately, one conclusion was reached: Coulston was a fate much worse than death, so the PRC had to help as many of these chimps as possible. After much negotiation, a decision was made to take in five chimpanzees. Several late night emergency phone calls later, that total had swelled to eight.

Even as they were on their way to Kentucky, temporary housing was being erected. Fortunately, the housing needs for these youngsters was not nearly as involved as it would have been for adults. Upon the advice of additional experts, plans were drawn up for a building with an attached outdoor enclosure. Land for the facility was cleared and funds were raised, as a whirlwind of activity consumed the PRC staff. With the help of many individuals, companies, and suppliers, somehow it all came together!

Fast forward to today: In addition to chimpanzees Cory, Pozna, and Martina, the PRC currently houses four other LEMSIP refugees: Ike, Jenny,  Noelle, and Rodney. (A female named O-Soy became critically ill shortly after arriving in Kentucky, and later died of an undetermined gastrointestinal ailment at LEMSIP, where she returned for treatment.) These seven live in a social group along with the four surviving individuals from the Dahlonega 5 group.

Sadly, we simply couldn’t help all of the LEMSIP chimpanzees. In the end, 100 of them made their way to North American sanctuaries. The remaining 100 were shipped to the Coulston Foundation to face an uncertain future as research subjects. In 1998, Coulston was also “awarded” 111 chimpanzees deemed “surplus” by the U.S. Air Force. In 1999, in response to chronic, uncorrected violations of the animal Welfare Act, the USDA settled three sets of charges against the Coulston Foundation with a $100,000 fine and orders to restrict breeding and divest itself of 300 chimpanzees (half its colony) by 2002. In September 2002, with the Coulston Foundation on the verge of bankruptcy, the Arcus Foundation, together with our esteemed colleague, the late Dr. Carole Noon of Save the Chimps, stepped forward and made a miracle possible for 266 of the remaining Coulston prisoners. Read more about their past—and now-bright future—at Save the Chimps.