One of our most friendly and delightful monkey social groups is Toby, Tonya, and Zoe, a trio of long-tailed macaques who came to the PRC from a variety of situations but have found loving companionship in each other as they spend their days at our peaceful sanctuary. 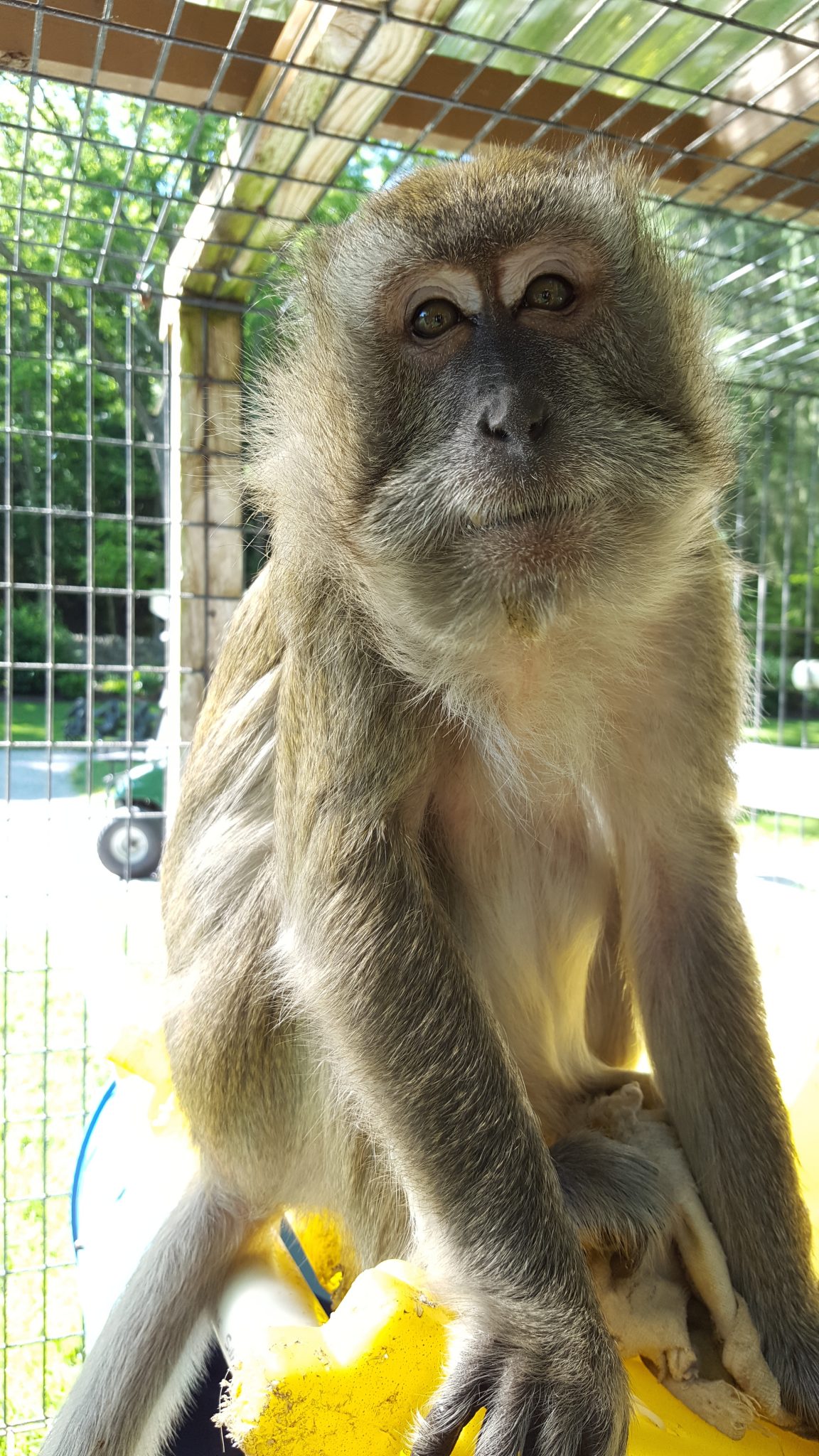 Toby was born in 1992 and was purchased as a pet in Nevada. As all monkeys do, Toby became difficult for his owners to handle as he approached puberty, and therefore they attempted to “tame” him by having him castrated. Obviously, this was not an appropriate solution for Toby’s energetic and destructive behavior inside a human home, so they contacted the PRC to surrender Toby to the sanctuary where he would have a safe and happy home for his lifetime.

Tonya is estimated to have been born in 1994, as we don’t have exact documentation of her birth. She arrived from a New York University research facility known as LEMSIP (Laboratory for Experimental Medicine and Surgery in Primates). New York University shut down the experimental laboratory in 1997 and planned to give all its primates to the Coulston Foundation, a notorious biomedical research laboratory in New Mexico with numerous documented USDA violations for the negligent death and improper care of many chimpanzees and monkeys. Luckily for Tonya, over 100 chimps and monkeys were placed in sanctuaries before the majority were sent to Coulston, and she along with seven chimpanzees found refuge at the Primate Rescue Center. 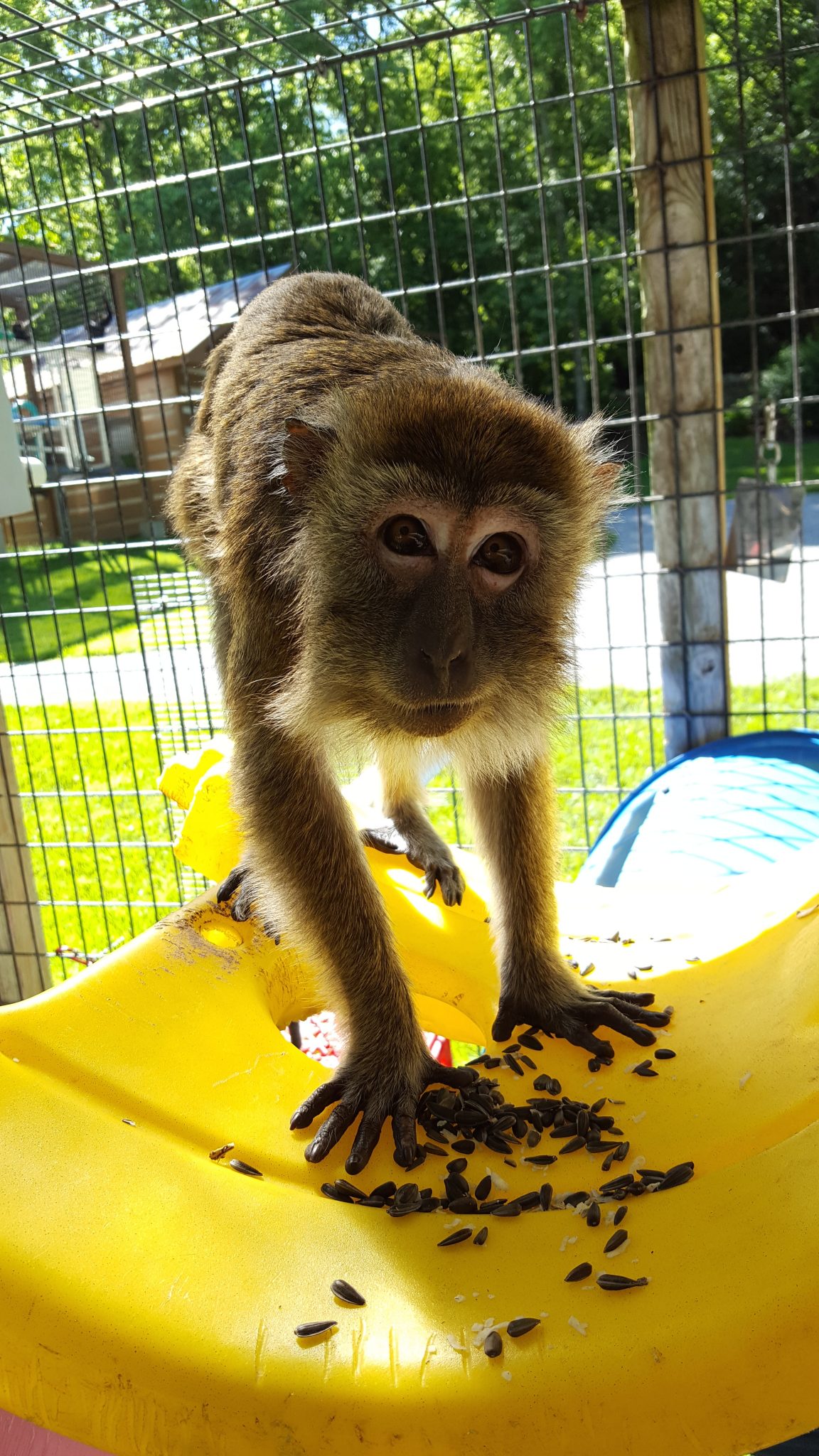 Zoe is estimated to have been born in 1996 and was purchased as a pet in Illinois. Zoe was treated well by her former owners, however, monkeys are exotic, wild, and unpredictable animals and she quickly became aggressive and difficult to care for, attacking her owners several times. She also developed various stereotypies, which are repetitive movements or behaviors that many primates develop as a result of being taken from their mother at birth and are usually exhibited when the animal is attempting to cope with stress. Zoe needed a more appropriate environment where she could be cared for in a sanctuary setting and have social interactions with others of her kind. Zoe came to the PRC in 2001 and has made many great friends at the sanctuary. 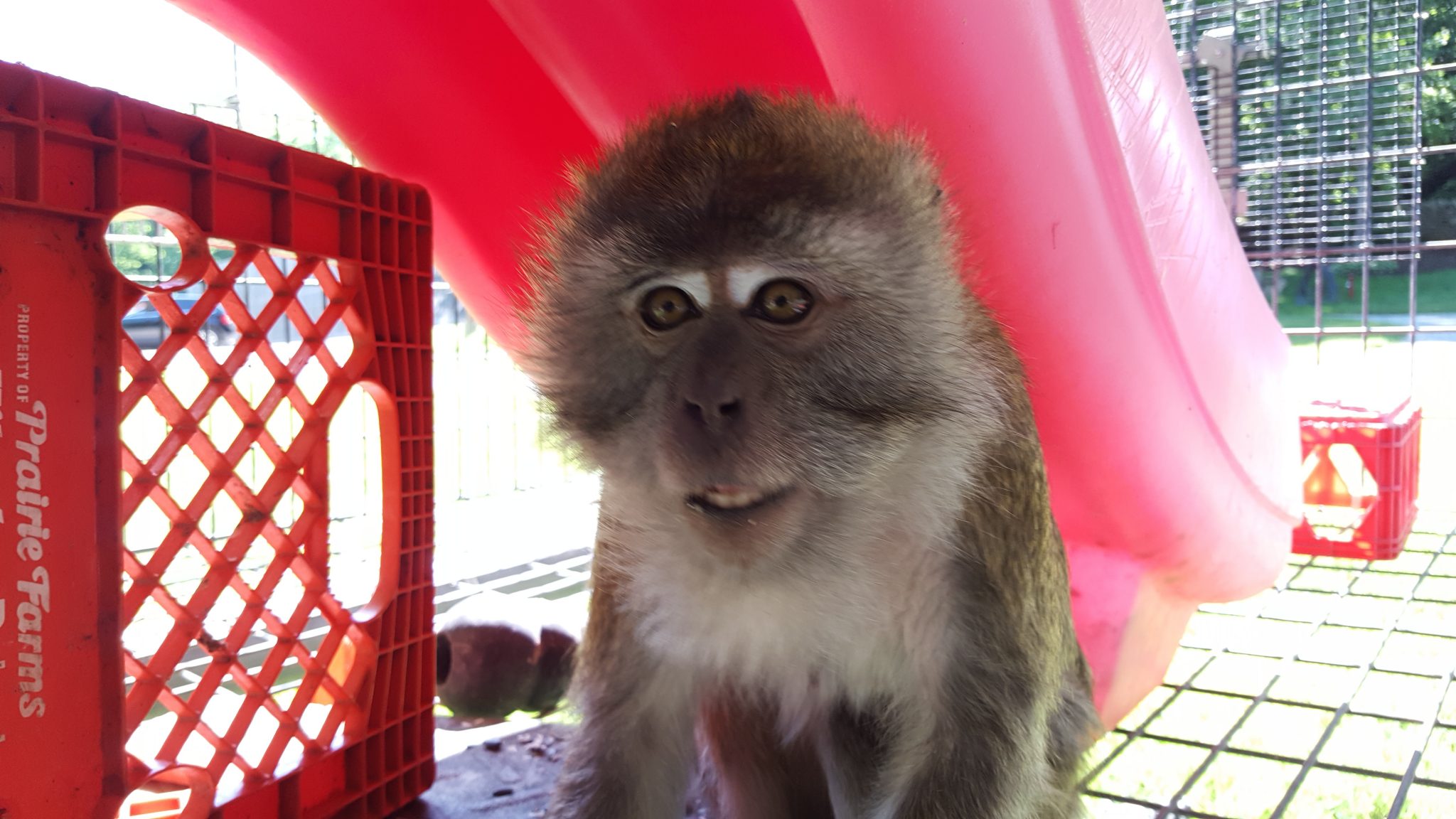 Although all three have lived in several different social groups, these three have lived together for many years and are truly devoted to each other. Toby is a kind, gentle group leader and allows the girls to feel confident and comfortable with him. He is known for his happy eyes and beautiful face, and he can often be seen carrying around a beloved stuffed animal, which he usually won’t allow caregivers to take and wash for him until it is a ragged version of its once fluffy self.

Tonya loves to sit near Toby and snuggle with him on cooler mornings. Because of the experimentation she underwent while in the lab, Tonya’s teeth were in very bad shape, and our veterinarian had to humanely remove them to save her from severe infections. Although she is a bit of a slower eater now, she really enjoys almost any fruit or vegetable imaginable and doesn’t let her lack of teeth deter her from having a varied diet. Tonya is also diabetic and receives daily medication to control her blood sugar. We keep a close eye on Tonya’s behavior, energy level, appetite, and weight and test her urine frequently for glucose, protein, blood, and ketone levels in order to manage her diabetes and keep her as healthy as possible.

Zoe is quite the chatterbox and is very reactive to attention from caregivers or from her fellow monkey companions and neighbors, grunting or squealing when she gets a beloved food item or if there is some “monkey drama” going on next door. Although Zoe still occasionally exhibits some stereotypies when she is a little uncomfortable with certain situations, like pulling on her hair or grabbing her feet, she is generally a very happy monkey.  Her bright eyes and fluffy-haired face are enough to cause a smile or squeal from anyone nearby. 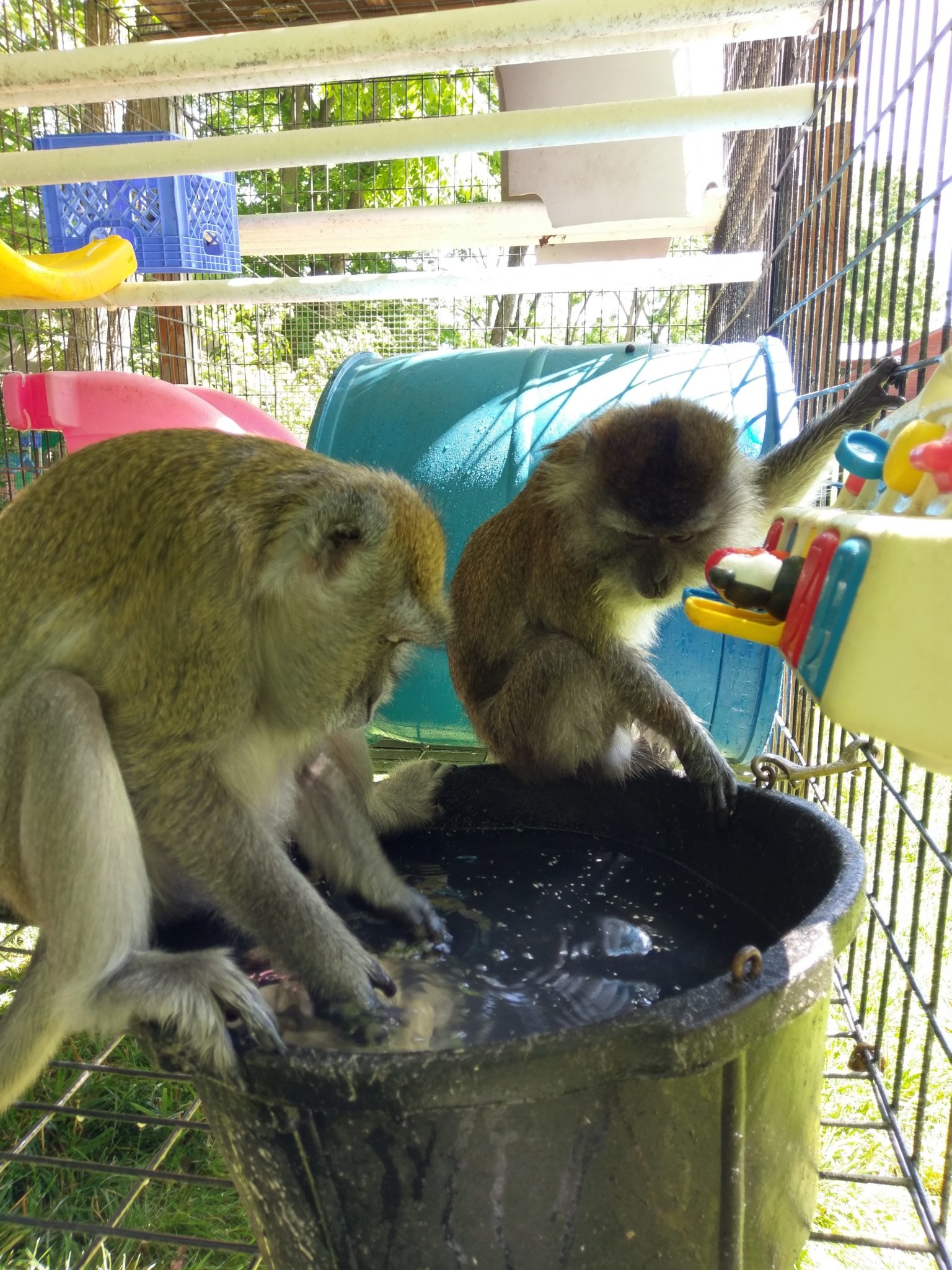 These three monkeys’ stories are just a few of the reasons we continue to work toward alleviating the suffering of primates in the pet trade, in laboratories, and in entertainment. Primates should never be kept in any of those unnatural, damaging situations, and our goal is to remain not only a sanctuary for those in need, but also a voice to educate future generations and hopefully end this vicious cycle.

Toby, Tonya, and Zoe are all available to sponsor in our Primate Pal program, or if you’d like to send them a gift, you can check out our Amazon Wish List and purchase an item for them to enjoy that will be sent directly to the sanctuary.