You might think it’s cute to text a GIF of a chimpanzee in overalls walking a dog, but behind this seemingly adorable image is a grim truth: “Those animals were beaten and abused into submission to act that way,” says Debbie Metzler, associate director of captive animal law enforcement for People for the Ethical Treatment of Animals (PETA).

If you have a phone, you’ve probably sent a GIF, a simple animated image file. GIFs are a fun and easy way to communicate via text, and people love them; GIF agency Tenor claims to have more than 300 million monthly users and more than 12 billion image searches per month.

But among the GIFs that these popular sites are those of great apes, especially chimpanzees, in unnatural situations. A quick search for “chimp” on GIPHY yields dozens of such GIFs: chimpanzees wearing human clothing, smoking cigars, navigating a speedboat, walking a dog, playing a xylophone, to name a few.

“They’re being forced to do that,” says Erika Fleury, program director of the North American Primate Sanctuary Alliance (NAPSA). “What people may think is a chimpanzee smiling is actually a fear grimace.”

All species and subspecies of great apes are either endangered or critically endangered, and this is in part due to the pet trade. Poachers seize baby chimpanzees after killing their mothers. The Jane Goodall Institute estimates that for every baby chimpanzee that is seized for the wildlife trade, up to 10 others may have been killed in the process.

“It might just seem like a fun, cute image, but it has a deeper impact,” Jory says. 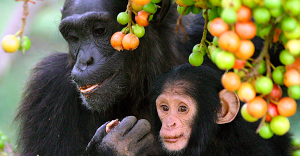 Adult female and infant wild chimpanzee feeding on figs in Kibale National Park, Uganda. In the wild, young chimpanzees stay close to their mothers for years and females typically give birth once every five years. Chimpanzees used for captive breeding often give birth every year and have their infants removed from them. Image by Alain Houle via Wikimedia Commons (CC BY 4.0).

These harmful ape GIFs often originate from a single source: the film industry. For years, productions used chimpanzees as comical fodder in movies like Bedtime for Bonzo, a 1951 production starring Bonzo the chimpanzee and Ronald Reagan. Images from movies featuring chimps eventually found their way onto stock image sites and later onto GIF sites.

Fleury says people are drawn to great apes because they’re so much like humans. It’s “considered funny” to see them in human clothing, for instance, she says. However, performance animals often are not treated humanely.

“When primates are bred and trained in entertainment, the conditions can be absolutely abusive,” Fleury says, noting that there are exceptions to this rule. To be healthy, chimpanzees and other great apes need to live with others of their kind and be raised by their mothers, she says. Chimpanzees used for entertainment are pulled from their mothers as infants, which sets them up for a lifetime of problems, including depression, obsessive compulsive disorders and self-harm. According to Fleury, these chimps are generally captive born, and trainers dump them when they grow too large and strong to handle, at about 6 years old. This has led to overwhelming intake numbers at many chimpanzee sanctuaries, she says.

In 2018, PETA announced it had successfully convinced five major stock photo agencies — Shuttershock, Alamy, Pond5, Dreamstime and Getty — to scrub their sites of unnatural images of great apes. Getty went a step further and extended this policy to all wild animals. A further victory came in July 2020 when PETA officially announcedthat there were no more chimpanzees working in Hollywood.

Many of these images still exist on GIF sites, however. “This is something that’s definitely on PETA’s radar because this content gets spread like wildfire,” Metzler says, adding that GIF sites are a bit trickier than stock sites because they feature user-created content. 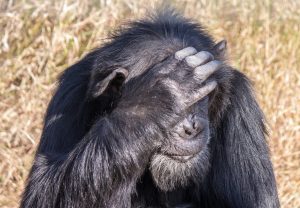 A chimpanzee at the Sweetwaters Chimpanzee Sanctuary in Kenya, which hosts apes rescued from traumatic situations. According to campaigners, captive chimps generally get too strong to handle at about six years of age, at which point they are often dumped by trainers. Image by Ray in Manila via Flickr (CC BY 2.0).

Currently, popular GIF sites like Tenor and GIPHY do not have specific policies against images of great apes in unnatural situations. A representative from Tenor said via email that the company does not allow content that is violent or abusive toward animals. Users can flag content that they believe is inappropriate. GIPHY has a similar policy against animal cruelty. Other sites, like Gfycat and Gifbin, don’t list any policies relating to animal treatment.

Harmful GIFs of chimpanzees and other great apes also make their way onto social media sites like Facebook and Instagram, but Metzler says these sites’ use of disclaimers with certain hashtags could be a helpful solution. For instance, when Instagram users search for hashtags like #slothselfie, #monkeyforsale or #elephantride, this disclaimer appears: “You are searching for a hashtag that may be associated with posts that encourage harmful behavior to animals or the environment.” A similar message appears on Facebook. This solution still poses problems for great apes, as many harmful GIFs use general hashtags like #chimpanzee, which would not be flagged.

All three experts agree that the most important way to fight against harmful imagery, including GIFs, of great apes is through education.

Metzler advocates for people to speak up when they see imagery of great apes in unnatural situations. But Fleury warns users not to interact with the content itself; that means no commenting on the post or sharing. “Anytime you engage with harmful material, you’re promoting it,” she says. “The best thing to do is ignore it and not help it spread because it’s like a disease.”

While harmful GIFs still persist on social media and perhaps your text message inbox, there is hope. “Definitely people are receptive to this and the culture is changing,” Fleury says. “A lot of progress has been made.”

Metzler agrees. “The days of chimpanzee tea parties are over.”