One of the most interesting and unconventional groups at the PRC consists of three spider monkeys and one siamang gibbon. These four friends have lived happily together for over a decade in an enclosure designed to fit each species needs. They all love to spend their days grooming and napping! Caregivers often see all four snuggled closely together with Jenny’s long arms wrapped around the group in the evenings before everyone heads off to bed. 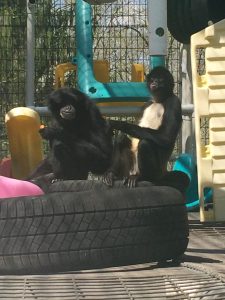 Jenny is a siamang gibbon, and she is one of the oldest residents at the PRC. Jenny was captured in the wild in 1971 and arrived at the PRC in 1992 after spending many years at the Greater Baton Rouge Zoo in Louisiana. Jenny originally lived with her partner, Jason, who also came from the Greater Baton Rouge Zoo, but when Jason passed away in 2003, Jenny was introduced to the group of spider monkeys. While it might seem like an odd pairing, Jenny, Dehlia, Bisou, and Chester all get along great. Jenny has a very easy going, laid back personality, but she doesn’t shy away from defending herself when one of her roommates tries to steal her food! Jenny loves to spend time at the top of her enclosure napping in the sunshine. 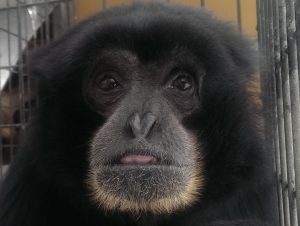 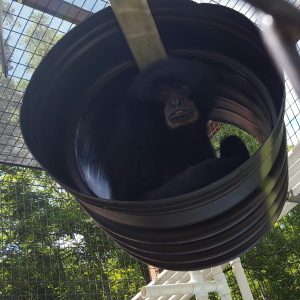 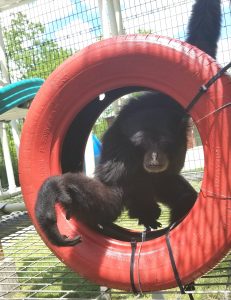 Chester is a spider monkey who was a former pet before arriving at the PRC in 2002. He is a very curious and energetic monkey who loves to explore new sounds, tastes, scents, and textures. Chester and Jenny spend much of their day grooming together outside. He especially enjoys enrichment that provides new scents for him to smell. Some of his favorites are blankets and stuffed animals that have a drop or two of essential oils on them. He is always excited to see his caregivers at mealtime and enjoys brachiating across the top of his outdoor enclosure. 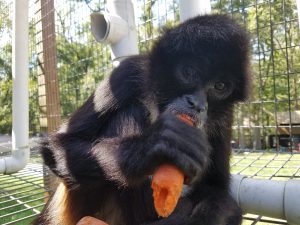 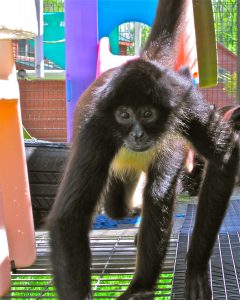 Bisou is also a former pet who was found roaming free in a California neighborhood and rescued in 1993. Since then, Bisou has found sanctuary at the PRC and has fully embraced living life with other monkeys. Bisou is French for “kiss” and the name suits her well since she often makes a “kiss-face” when greeting her caregivers each day. She has a sweet, shy temperament and is very observant and inquisitive. She will often sit and watch as her caregivers complete their daily tasks, and she takes her time examining new foods and enrichment. Bisou loves spending time grooming with Jenny, Chester, and Dehlia, and she even seems to enjoy some occasional alone time in her outdoor enclosure. 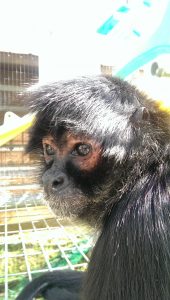 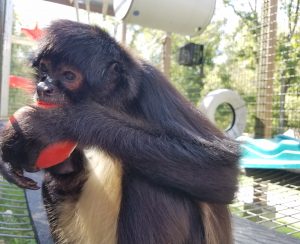 Dehlia was found and rescued from a closet in an abandoned apartment in 2002, and has called the PRC home ever since. Dehlia is the leader in her group of four and usually gets first pick when it comes to food and enrichment. She is a very social monkey and often whistles with delight when she sees her caregivers and volunteers each morning. She gets particularly excited when she sees the feed cart coming around! One of Dehlia’s favorite enrichment activities is foraging for treats in her forage pool. Dehlia also enjoys sunbathing at the top of her outdoor enclosure and long grooming sessions with Chester. 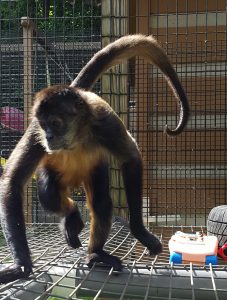 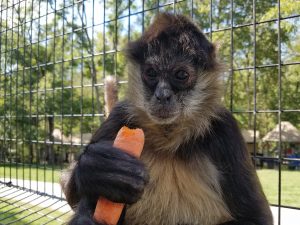 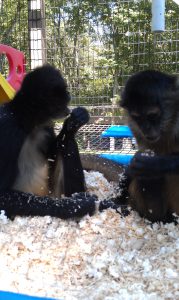 Jenny, Chester, Bisou, and Dehlia are all available for adoption through our Primate Pals program! You can click here to learn more about the program, and choose your Primate Pal today!