We Miss You, Hazel! 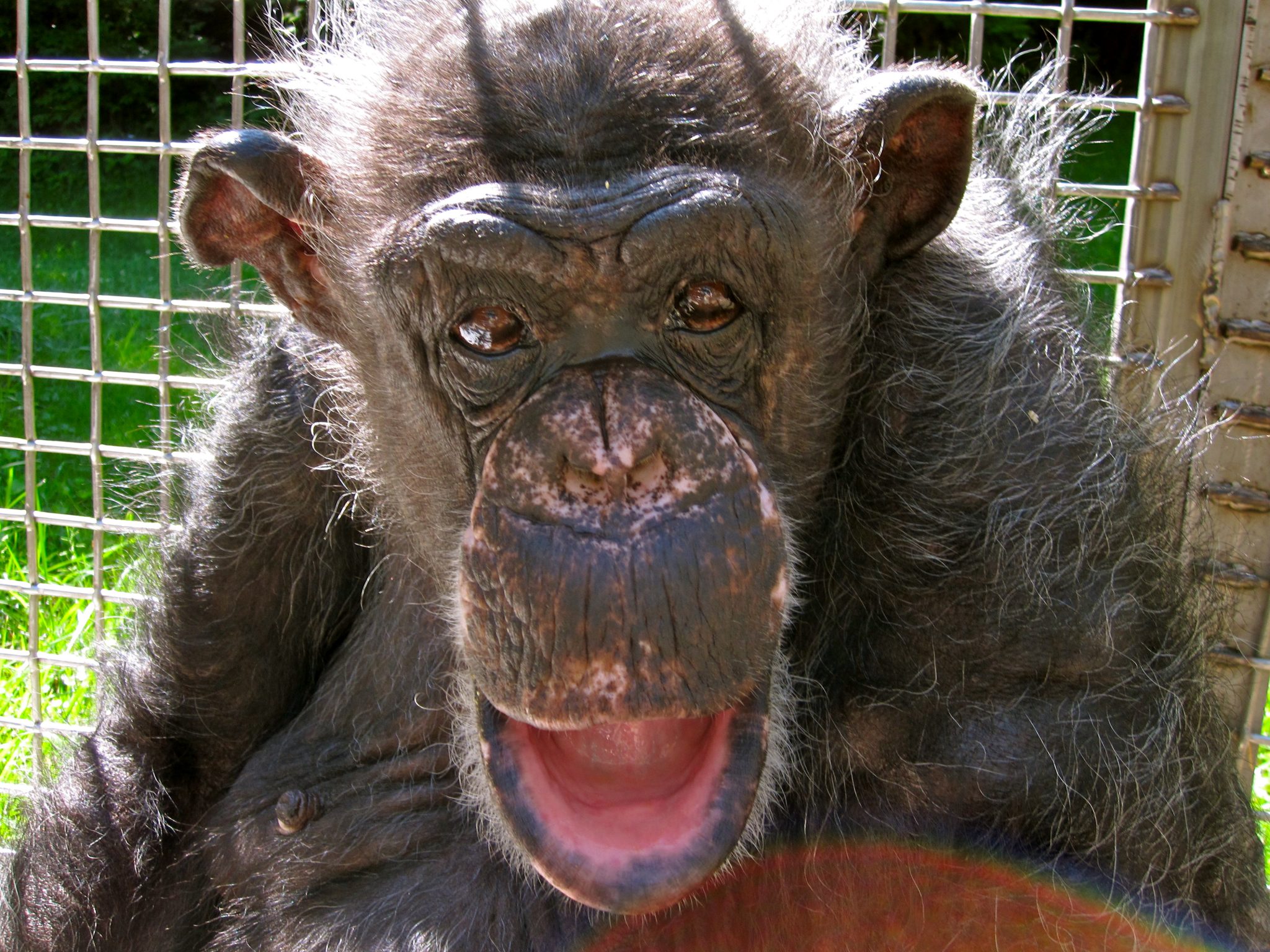 Hazel passed away in 2016 due to complications of diabetes at an estimated age of 47 years old. Beautiful Hazel left us on the morning of May 25th in her sleep, leaving behind her legacy of relishing life’s comforts after surviving a dark and terrible past. Hazel was most likely caught in the wild in the late 1960s or early 70s, and so we don’t know her birth date. We were told she was initially acquired for use in a circus, but she has always been a stubborn one and didn’t perform as her trainers demanded. They nicknamed her “Lump Lump” and sold her to a private owner in Georgia. As privately-owned primates, Hazel and her companions Donald, Victoria, Zulu, and Debbie, who is now deceased, were housed in a filthy, windowless 10’x10’ concrete bunker for close to twenty years. The chimpanzees were forced to survive without any ventilation, very little fresh water and improper nutrition until their rescue two decades later. 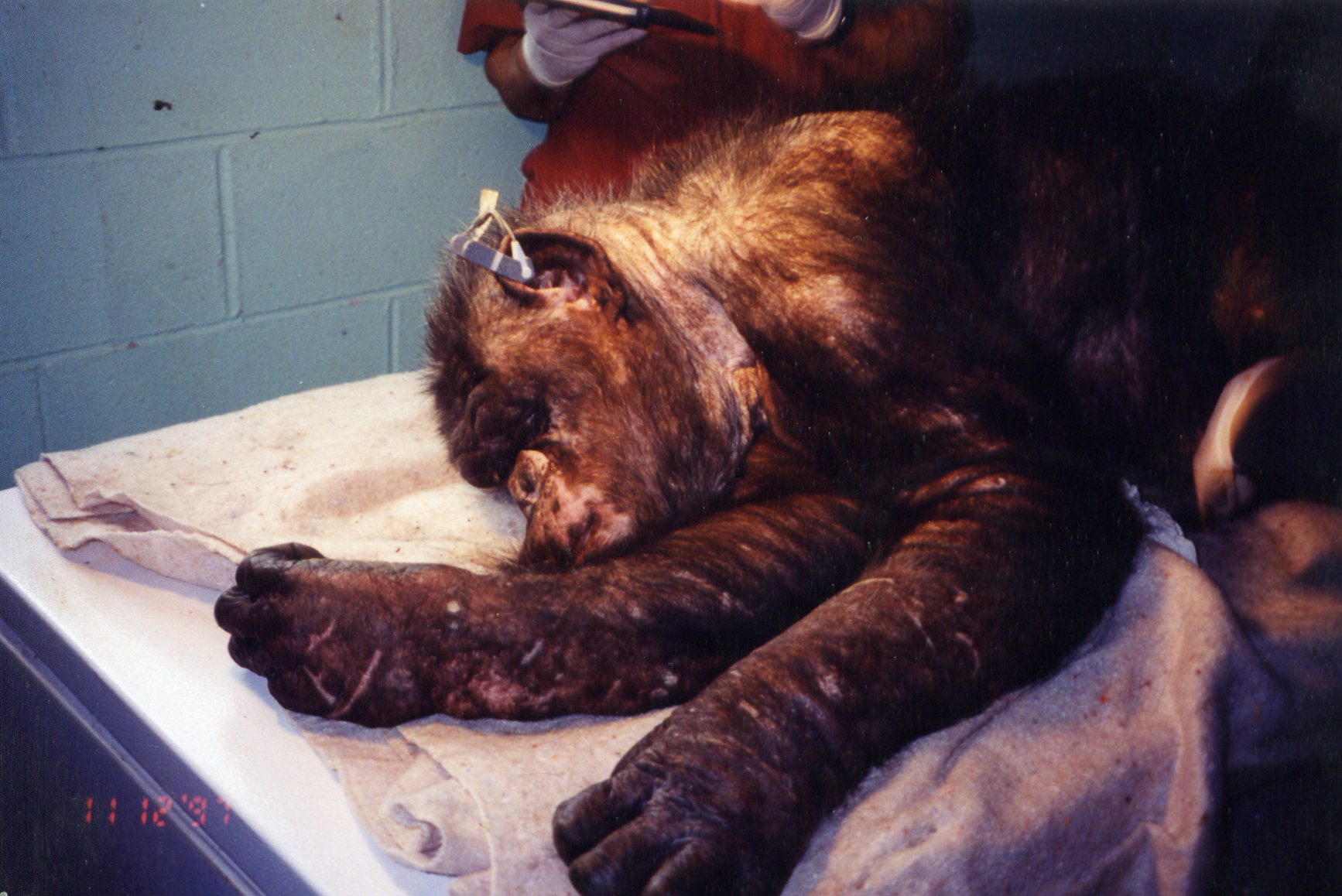 Hazel was sedated and received her first medical examination before she made the journey to her new home, the Primate Rescue Center.

When Hazel arrived at the PRC in 1998, she was obese and was diagnosed with diabetes. We immediately got to work getting her diabetes under control and made great strides by introducing her to a healthy diet full of fresh fruits and vegetables and getting her to move around in our large outdoor enclosure. 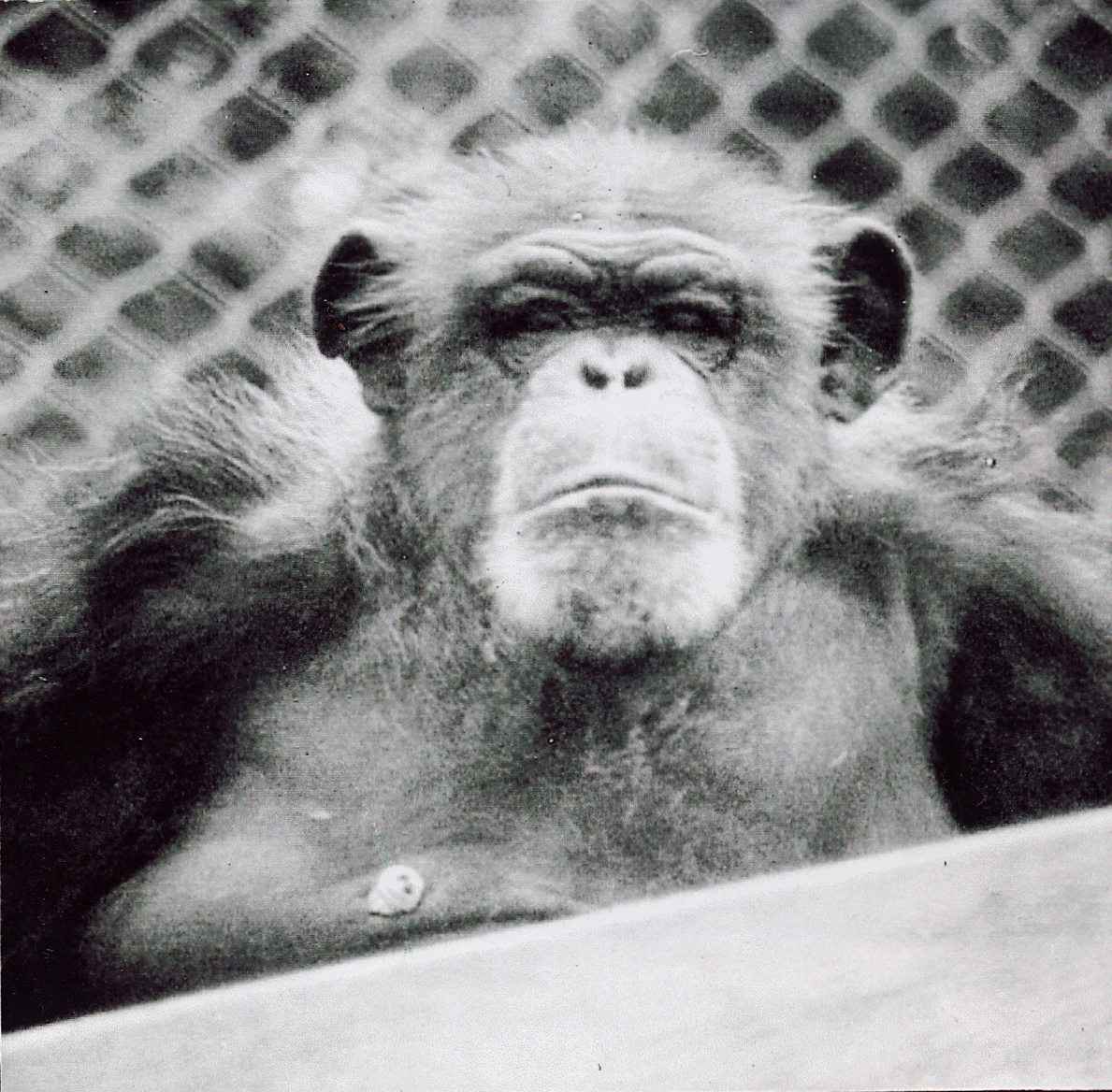 Hazel always struggled with her weight and mobility, but in 2000, Hazel and fellow adult chimpanzee pals Donald, Victoria and Zulu were introduced to 7 young chimps, which certainly helped increase Hazel’s activity. The youngsters had been living at the PRC since 1996 when they were rescued from the Laboratory for Experimental Medicine and Surgery in Primates (LEMSIP), a biomedical research laboratory in New York. Hazel and the other adult chimpanzees were about to meet Martina, Ike, Rodney, Cory, Pozna, Noelle, and Jenny. Before the introductions, the adults typically spent their days lazily grooming and napping, while the chimps rescued from LEMSIP displayed youthful energy and rambunctiousness. But, as the two groups were united into one cohesive unit of eleven, the once-sedentary adults began running, playing, and reprimanding the youngsters for inappropriate behavior. The youngsters benefited, as well, as the integration enabled more complex interactions and social opportunities. With Hazel’s improved diet of appropriate foods and a more active lifestyle, her diabetes was more controlled than it ever had been. This gave Hazel the opportunity to live her best life.

Hazel was so nurturing towards all of the chimps, but especially the young and rowdy boys. She commanded respect and her reassuring presence was key to facilitating the introduction of the two groups of chimps. She had a special bond with young Cory, and if you saw the two together, you’d think he was her baby from the start. 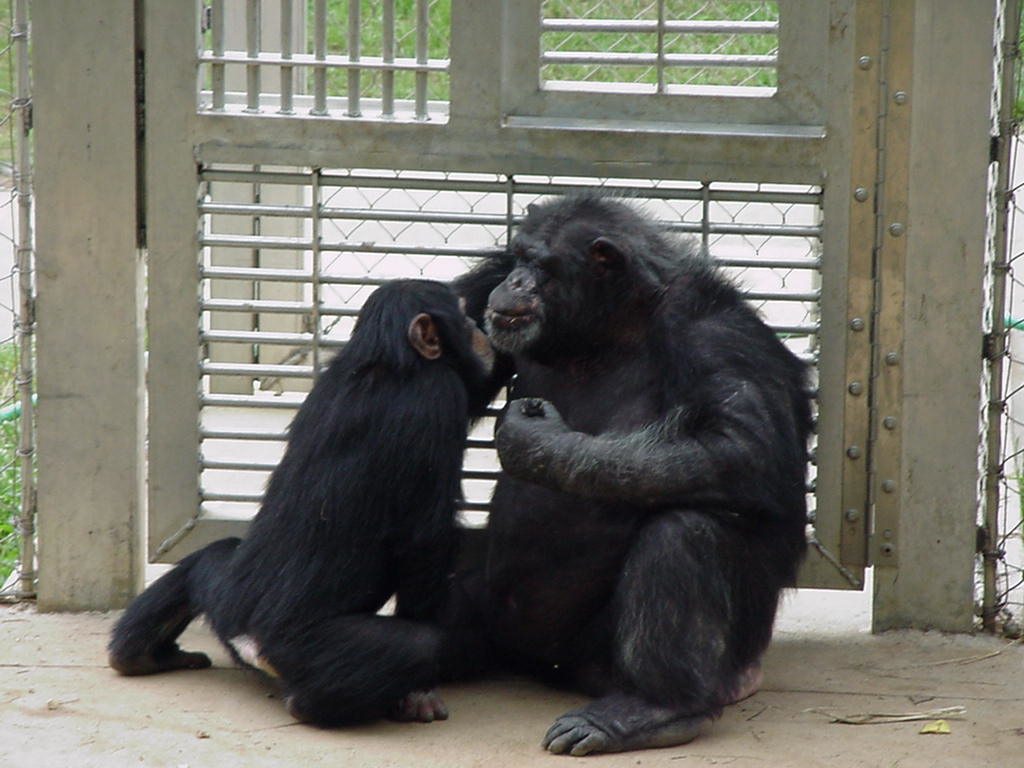 When the chimps were first introduced in 2000, Hazel and Cory were drawn to each other right away. 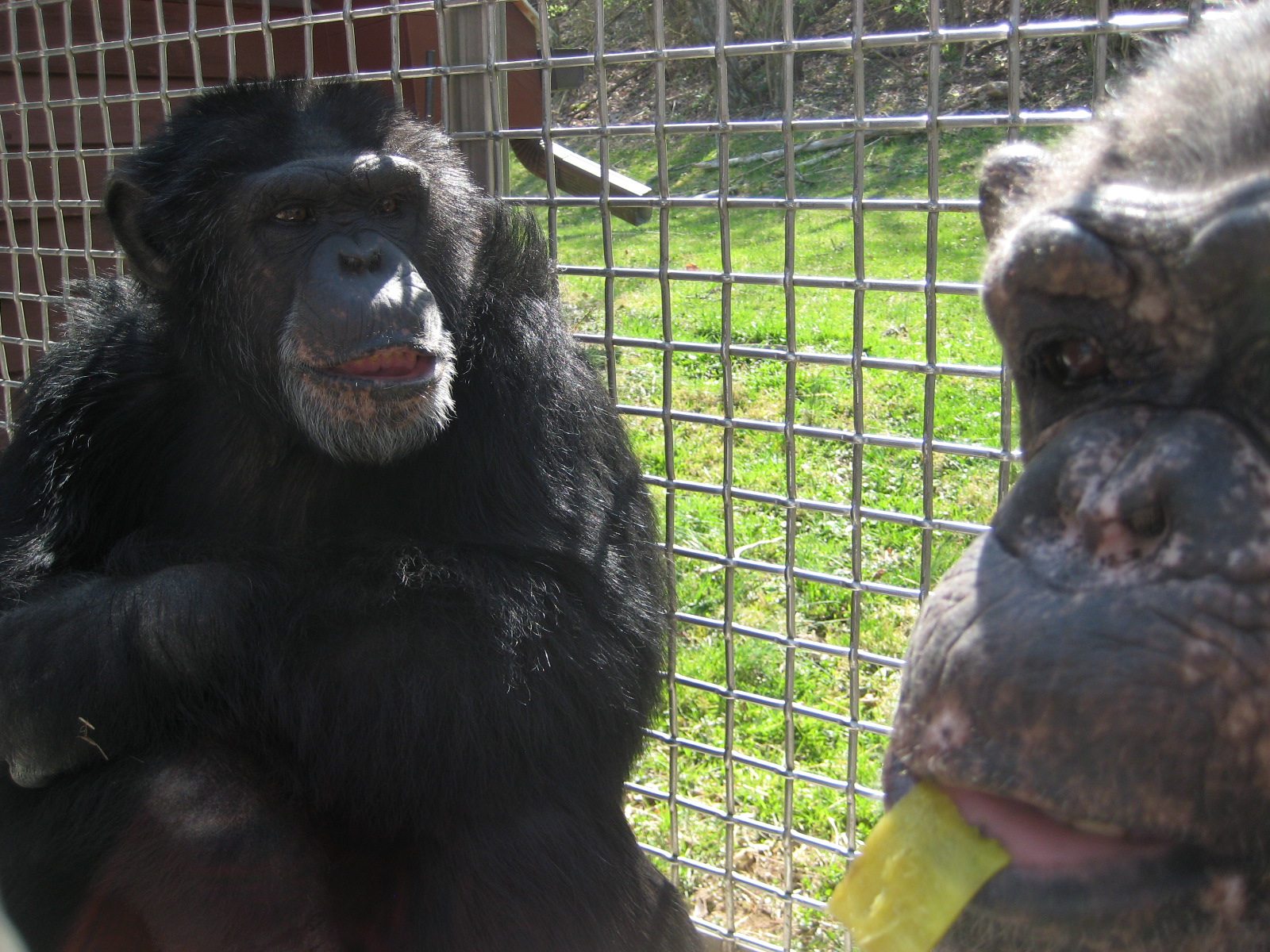 As Cory grew out of his adolescence, his bond with Hazel never faltered. He groomed her lovingly, respected her authority in times of conflict and always joined her outside on sunny days to relax in the warm sunshine. Hazel always stayed close with Donald, Zulu and Victoria, as she enjoyed the comforting presence of her long-time companions. All of the younger chimps looked up to and adored Hazel. She taught them how to construct intricate nests, how to properly groom one another and, most importantly, how to relish life’s pleasures.

Hazel’s warmth and confidence was endearing to many. She could often be found napping in a hammock or resting in the outdoor tunnel. All of the volunteers and staff of the PRC adored and loved Hazel’s sweet soul. Although it is difficult to reflect on Hazel’s passing, we are comforted by the fact that the last decades of Hazel’s life were full of fresh air, sunshine, her beloved chimpanzee friends and the fresh food that she loved so much.