Carlos, Rainey, Luke and Ciera are a fun and feisty group of monkeys who call the PRC home! They all came from different backgrounds, but they have found companionship in each other and they enjoy living together. 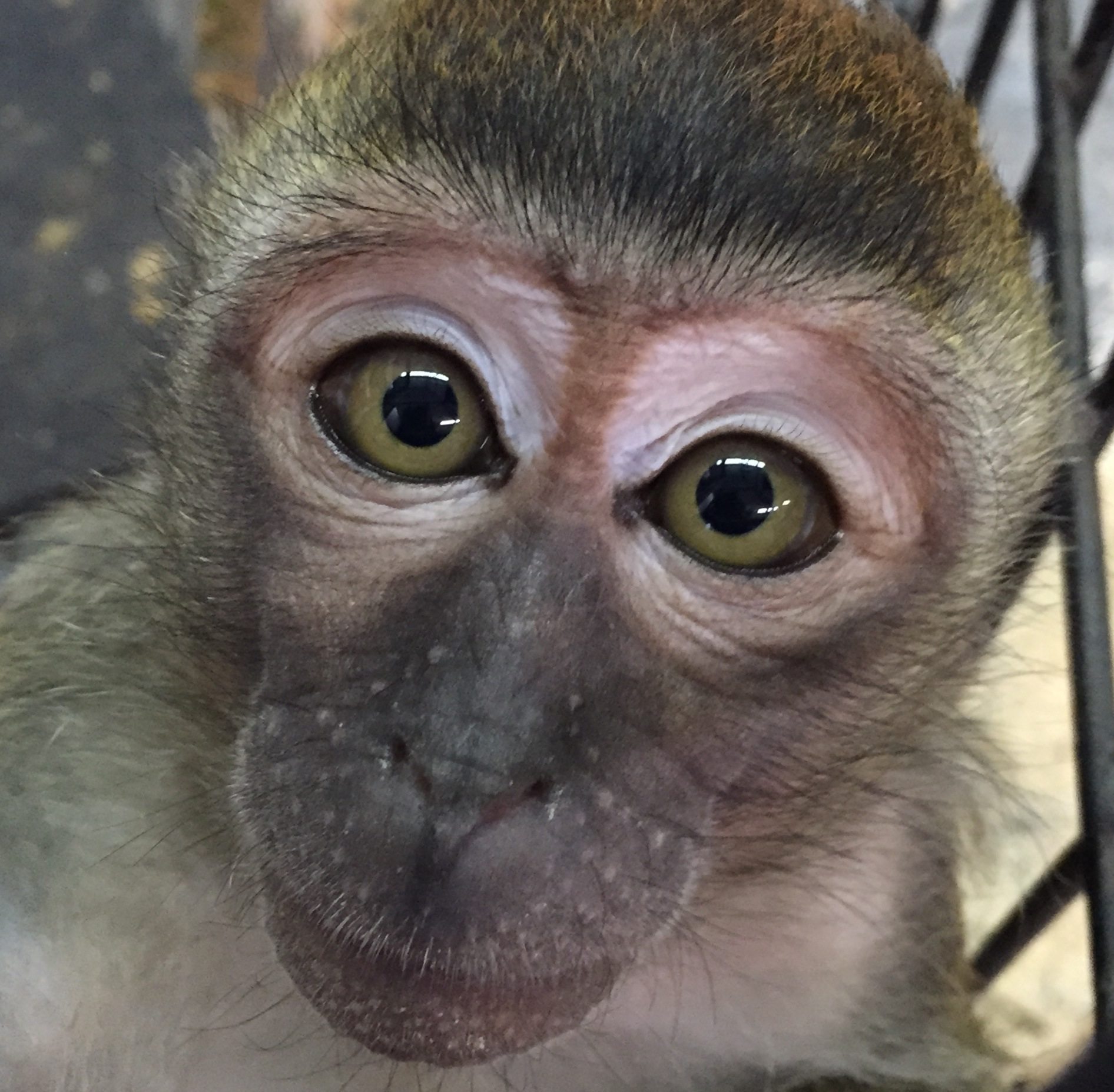 Carlos is a long-tailed macaque who arrived at the PRC in 2013 after being rescued from the pet trade when he was just 3 months old. Carlos was so young when he first arrived that caregivers were closely monitoring his health around the clock. It was clear that he needed adoptive monkey parents in order to have the comfort and care that is so important for the emotional and psychological development of infant monkeys. Caregivers were able to help Carlos adjust to his new surroundings and quickly introduced him to a pair of senior monkeys, Dewey and Crunchy.  Grandpa Dewey and Grandma Crunchy taught Carlos how to interact and communicate with other monkeys, while also providing him with the nurturing love and attention that only monkey parents can. As Carlos grew up and became more energetic and curious, his activity level was more to keep up with than his grandparents could manage. Luke, a long-tailed macaque, was the perfect companion to still provide the nurturing comfort of a monkey parent, as well as be a wonderful playmate and friend to growing Carlos. Carlos and Luke immediately bonded and are practically inseparable. Carlos and Luke later joined Rainey and Ciera and formed a sweet little monkey family. Carlos is a friendly little guy who loves to run, jump and play, but he also enjoys relaxing in the sunshine for some grooming with his friends. 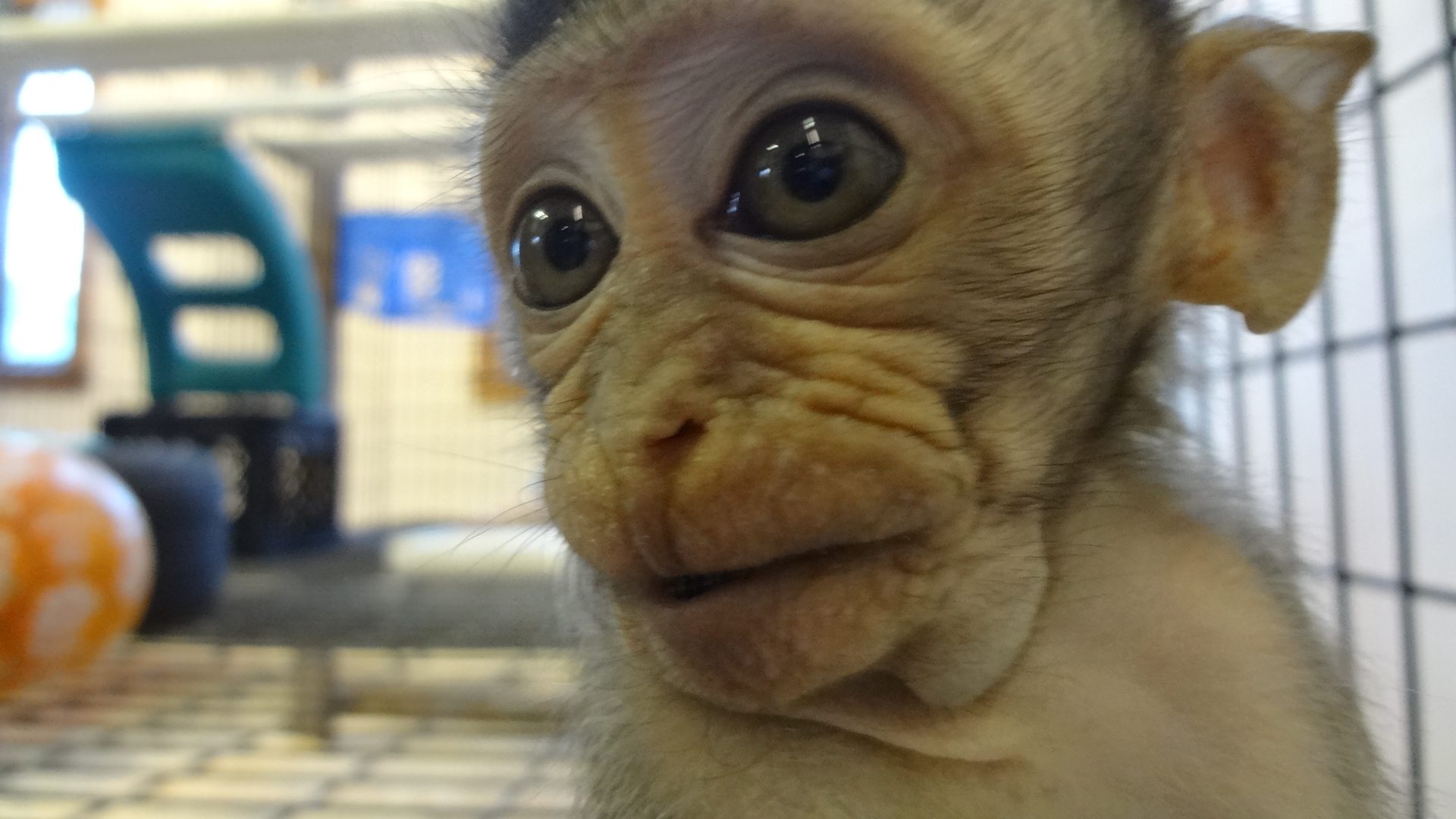 Carlos, shortly after arriving at the PRC in 2013. 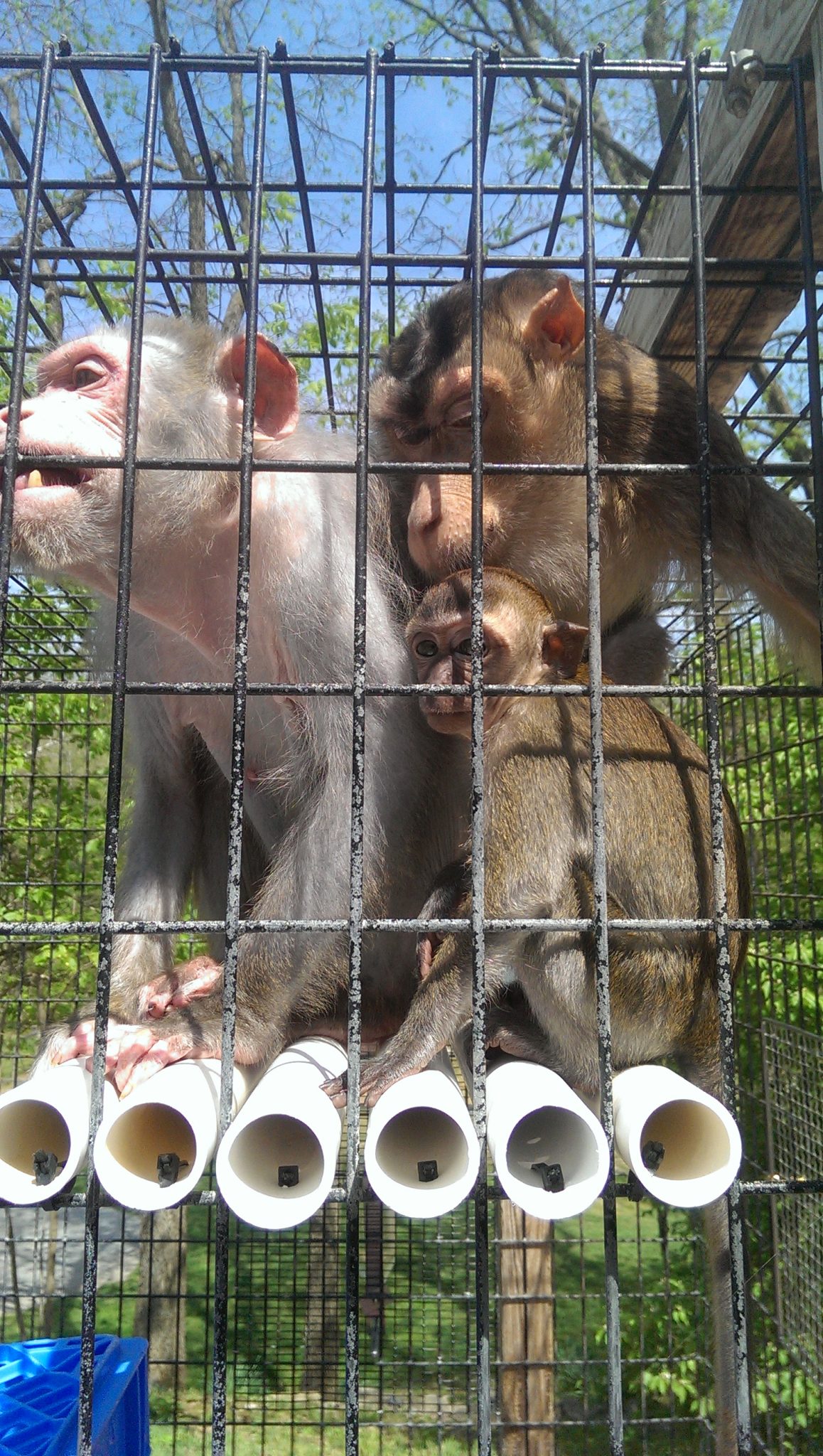 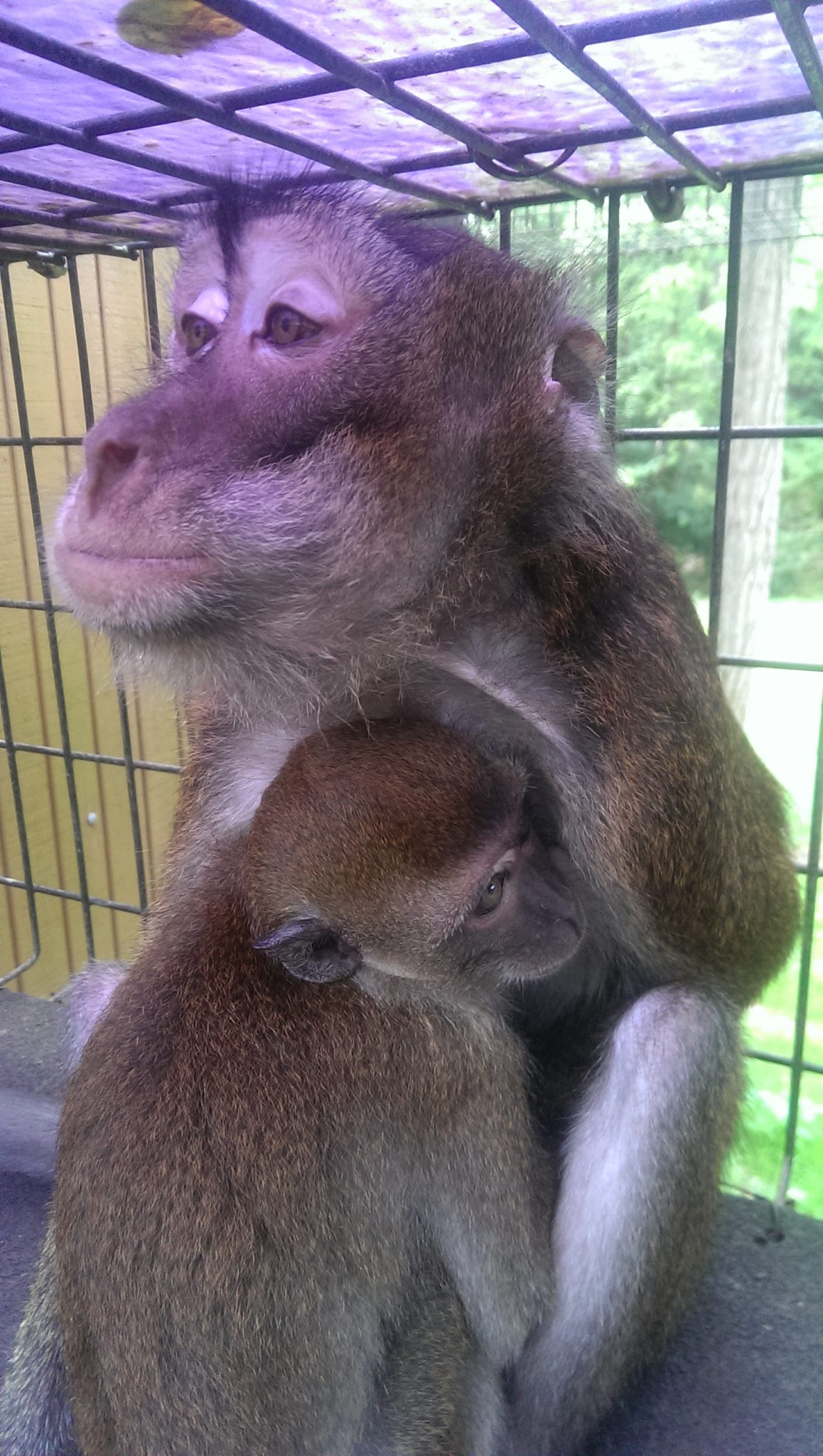 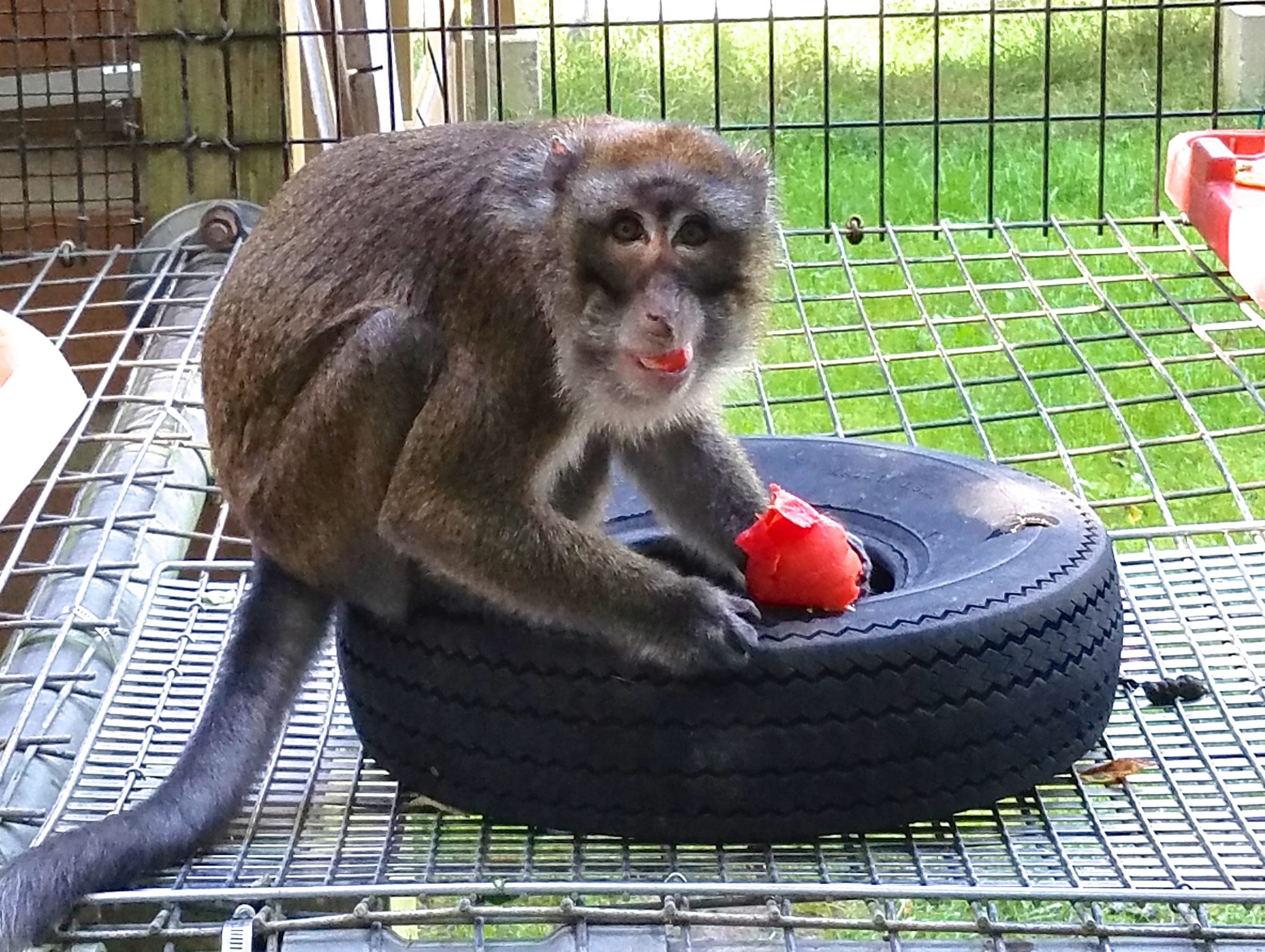 Luke is a long-tailed macaque who was also a former pet. His former owners had him castrated and had all of his teeth pulled in an attempt to keep him “tame.” These are common procedures that privately owned primates (“pets”) are forced to endure in efforts to control and repress their natural instincts. Luke suffered some significant trauma from his time as a pet, but he has adjusted well to living with other monkeys. Surprisingly, his lack of teeth does not stop him from eating all of the same foods as the rest of the group, and he especially loves grapes, corn and carrots! Because of his past, Luke remains a little distrustful of humans, but over the years he has started to form a level of trust with his caregivers. Luke is a fiercely loyal friend who is always ready stick up for his pal Carlos when there is a disagreement with the girls, but he is always ready to groom Rainey and Ciera to keep the peace. 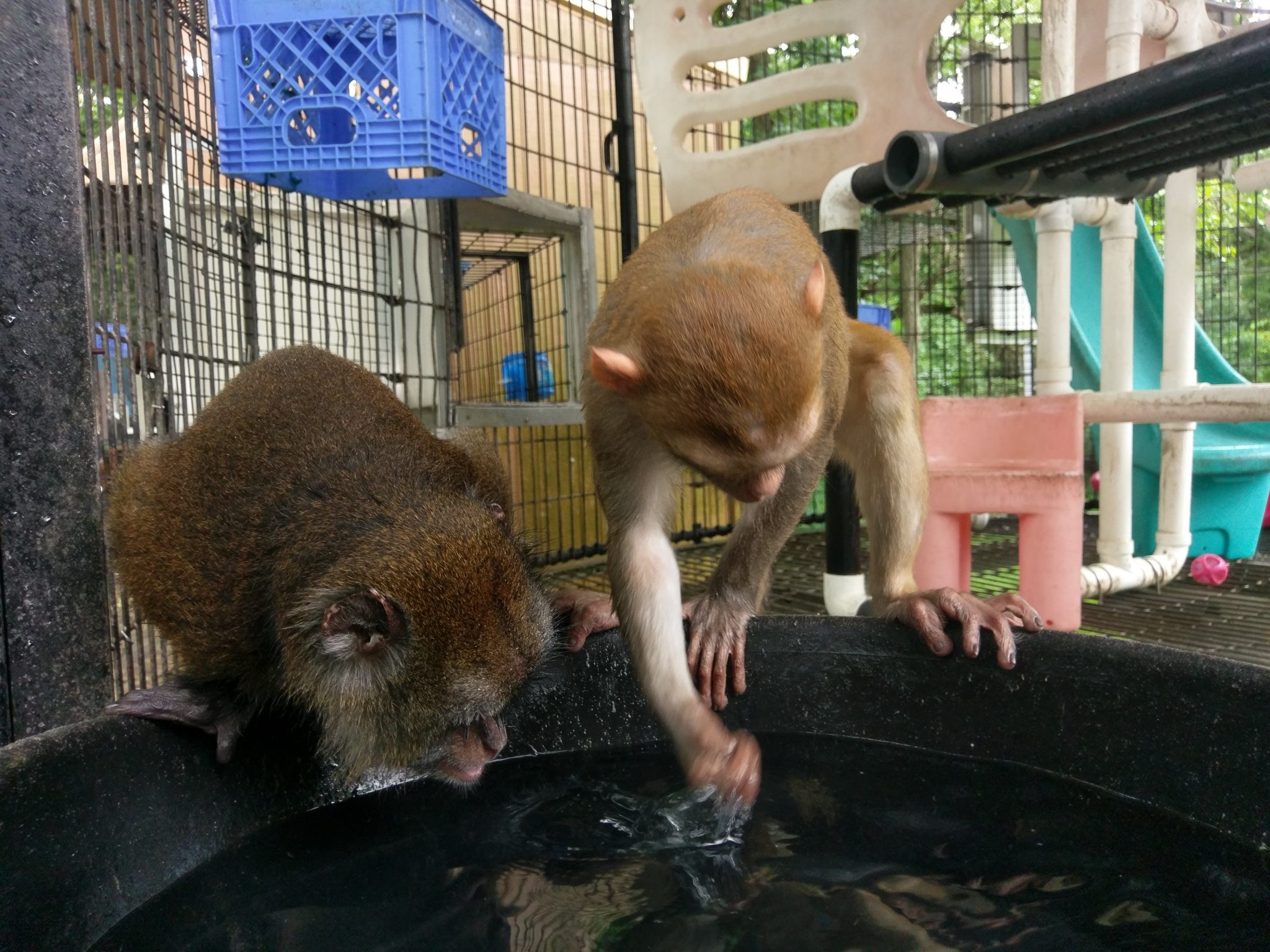 Luke and Rainey playing in the pool. 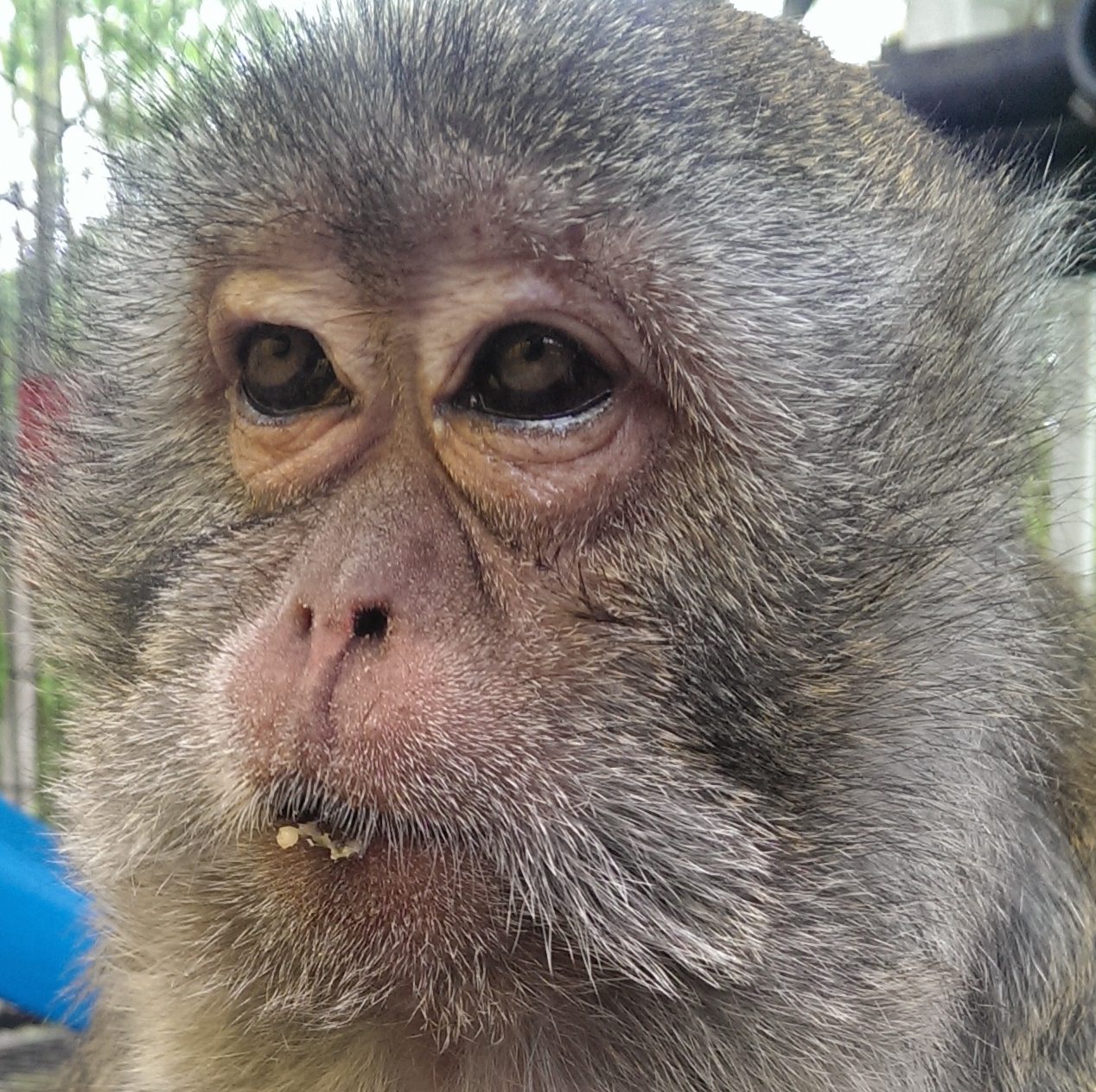 Ciera is a long-tailed macaque who arrived at the PRC in 2004. She was a former pet from Indiana and was born in 2000. Like many privately owned primates, Ciera’s diet consisted mostly of processed human foods that were very unhealthy for her. Ciera seems to really enjoy her current diet of fresh vegetables, fruit, lettuce and nuts and is often seen savoring her favorite items. Ciera is a sweet, friendly monkey, but she is also the no-nonsense matriarch of the group! She can keep Carlos and Rainey in line with just a look, and she gets first pick of the food every morning at breakfast. Ciera is very loving and spends much of her time grooming with the group and lip smacking to her caregivers. 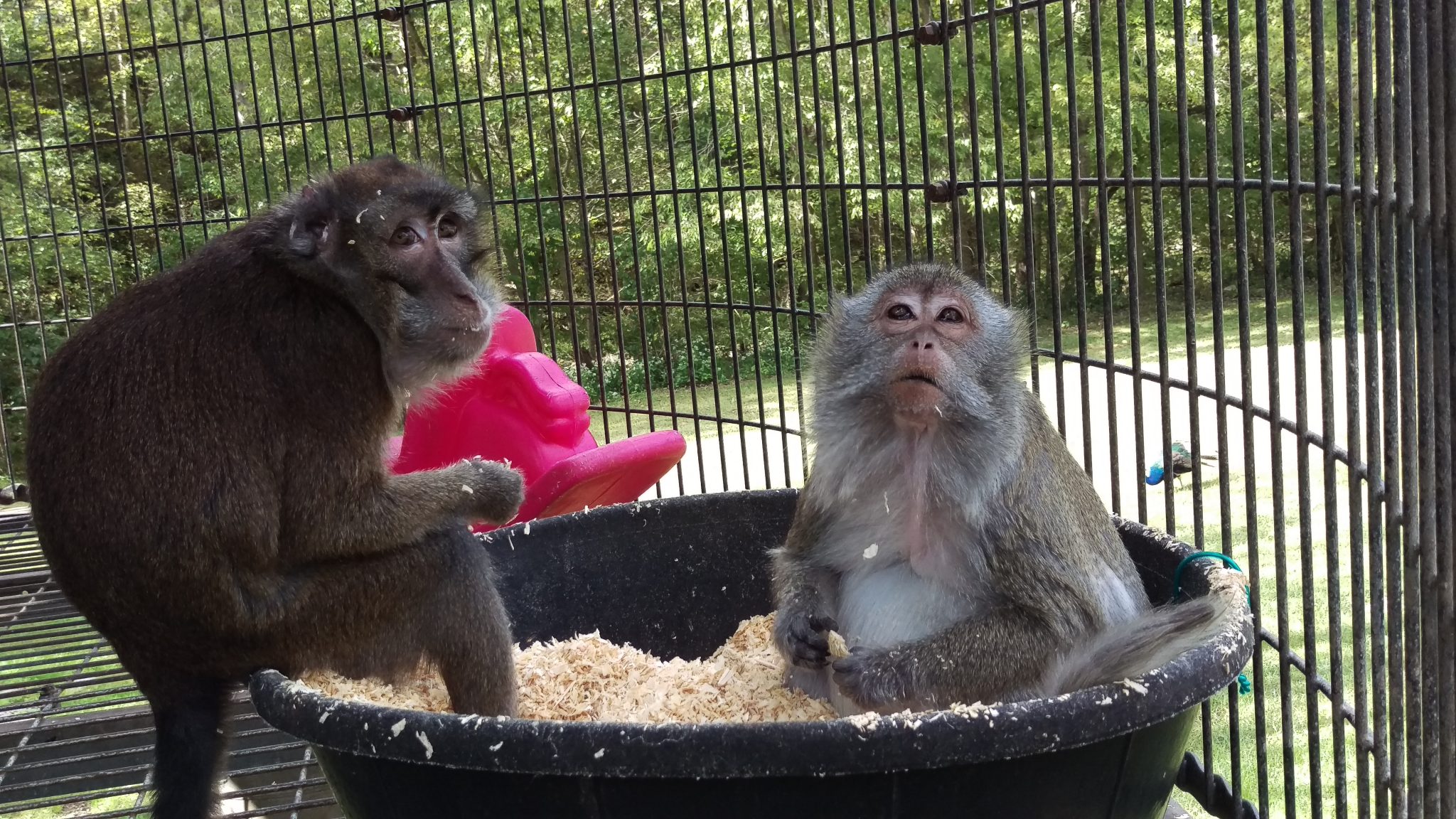 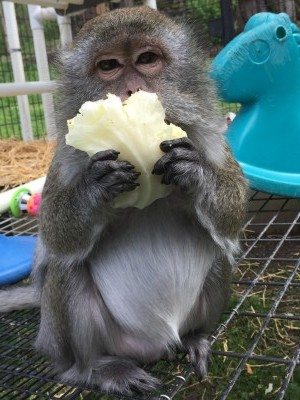 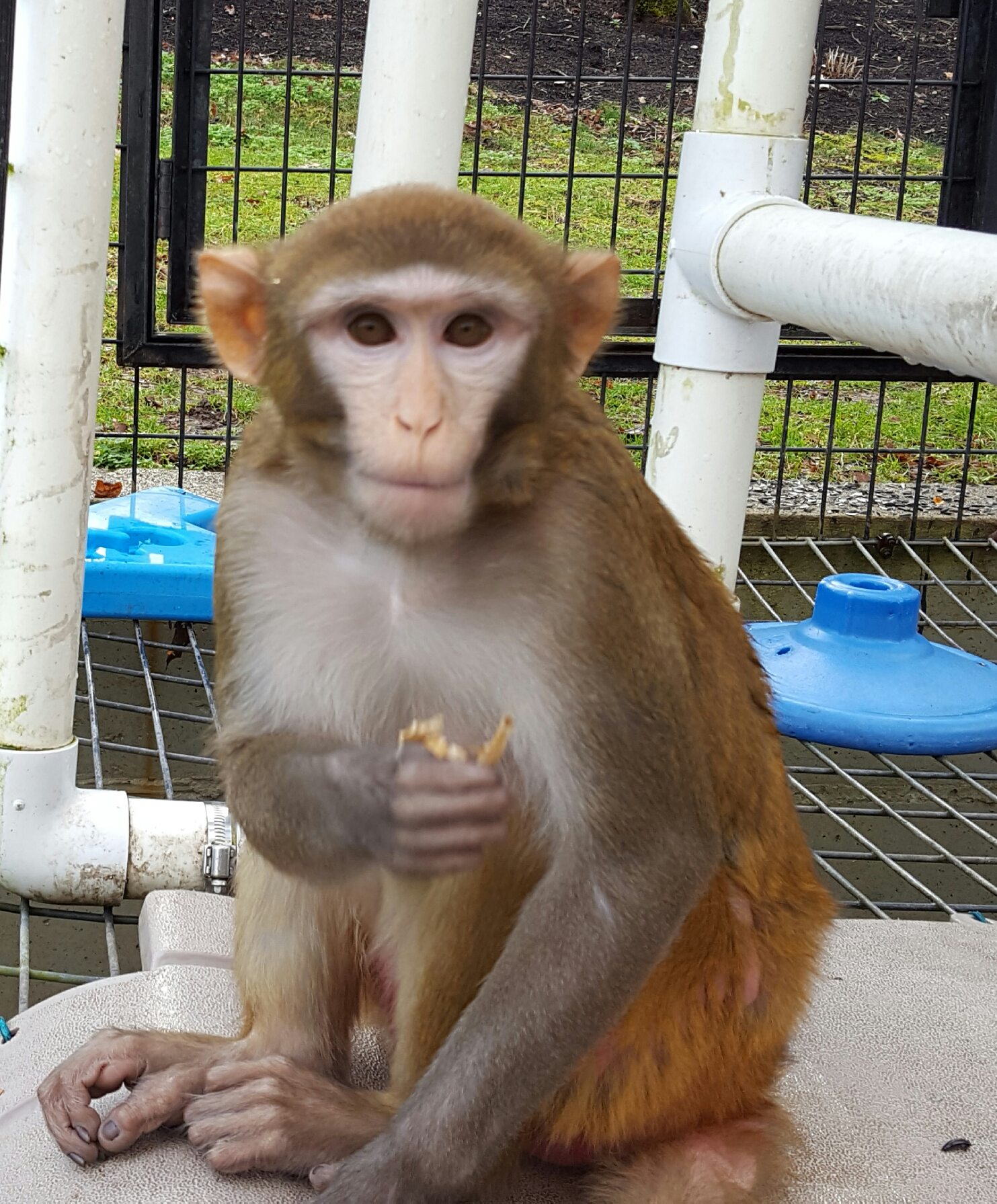 Rainey is a Rhesus macaque who was born in 2012. She is a former pet who was turned over to a zoo in Idaho before coming to the PRC in 2014. Rainey is full of energy and loves playing chase with Carlos in their outdoor enclosure. She loves all kinds of food and is always eagerly awaiting the feed cart every morning when we make our rounds! Rainey had a hard time learning how to get along with other monkeys when she first arrived due to her extensive time interacting with humans, and she displayed several abnormal behaviors. However, she began to recover once she started living with other monkeys. She still has her quirks, but Ciera, Luke and Carlos are all so patient with her as she learns the ropes of monkey life! 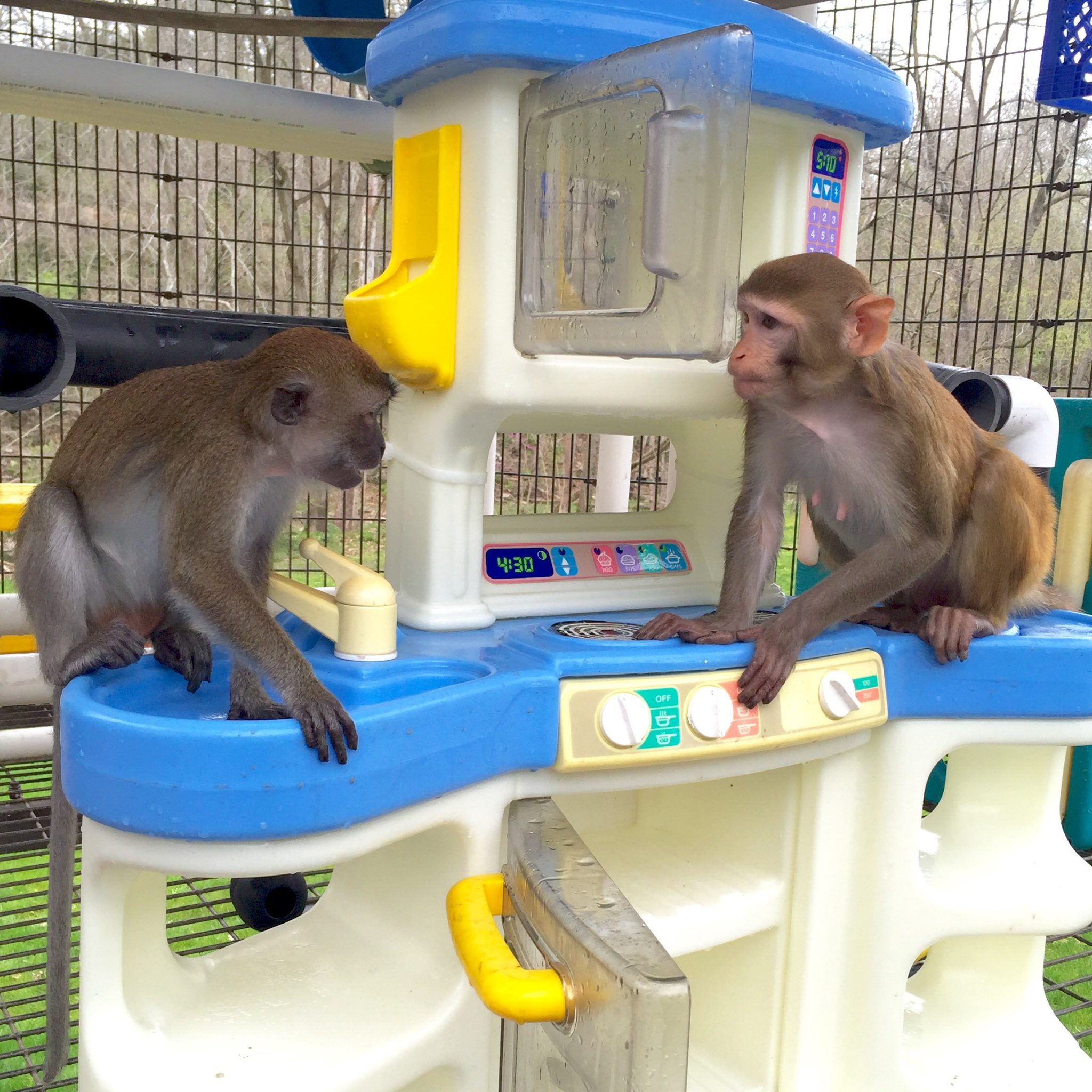 Luke, Ciera, Rainey and Carlos are all available for adoption through our Primate Pals program! You can click here to learn more about the program, and choose your Primate Pal today!