Over the past thirty years, the Primate Rescue Center has rescued monkeys from a diverse array of pet situations and laboratories, with individuals exposed to a variety of living conditions and levels of care. What all of these monkeys have in common is the trauma that they experience when taken from their mothers as babies and deprived of the irreplaceable love, comfort, and knowledge they would have gained had they been raised naturally. In some cases, we have seen this trauma magnified by severe neglect and lack of basic care, causing psychological and emotional damage that can take a lifetime of recovery for the primate. One such monkey is Vernon. 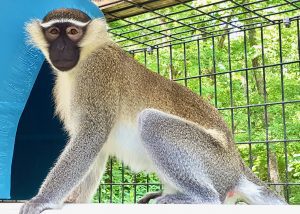 Vernon, a vervet monkey, came to the Primate Rescue Center in January 2004 after being rescued from a hoarding situation in New York. Animal control officers discovered hundreds of different animals (dogs, cats, birds, monkeys, raccoons, and many more) living in the basement of the home. All of the animals were housed in small, individual cages stacked on top of and closely around each other. As you would imagine, the animal control officers stated that the home was filthy, and the smell of ammonia was so strong that it made their eyes water. The rescuers wore hazmat suits and masks to free the animals from the squalid conditions in which they had been living. Vernon, along with six other primates, made the long journey from New York to Kentucky transported by one of the PRC’s caregivers. Among the group was also Norman capuchin (a current PRC resident), George bushbaby (who lived at the PRC until he passed away in 2010), two other capuchin monkeys and two squirrel monkeys (who were all transferred to Jungle Friends Primate Sanctuary in Gainesville, FL to be placed with like-species companions after their initial examinations and some recovery time at the PRC).

All of the primates rescued from this situation were unhealthy and extremely fearful. Vernon and Norman seemed to have the most severe psychological issues. Along with consistent rocking and pacing behaviors, they were very fearful of any type of enrichment item and many types of food at first. Vernon would alarm call at blankets and toys, letting us know that we needed to slowly introduce these items to him to build up his trust in his new environment. Although he acclimated more quickly to the new variety in his diet, the process of making him more comfortable with enrichment items was extremely slow going. It took years before Vernon was comfortable enough to touch or hold a blanket. It took several more before he was comfortable enough to gently play with a ball in his enclosure. Today, Vernon is accepting and unafraid of most enrichment items, and we’re able to give him a wide variety of different activities and devices to manipulate and play with. He still struggles with unknown objects or unfamiliar people and will alarm call for several minutes if he notices something unusual. Often, it can be something as simple as a volunteer carrying a box full of stuffed animals to store in our enrichment shed, but to Vernon, it can be cause for alarm. To make him more comfortable, we go to great lengths to avoid upsetting him by the sight of any items he may deem worrisome. 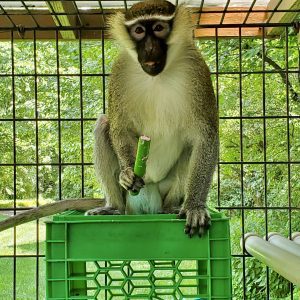 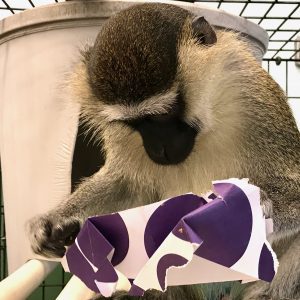 Socialization is another goal we hope each primate experiences after they are rescued, and we always offer the opportunity for companionship after their initial medical rehabilitation goals for the individual are reached. However, the road through rehabilitation to recovery can vary significantly for each individual. There is no one size fits all path. Recovery is not always exactly as we envision it to be. Paying close attention to the needs of the individual and adapting our plan to meet their needs is the most crucial part of the process. Understanding that our hopes for them won’t always follow the same recovery timeline they need allows us and them to find joy in the small steps.

We attempted several times to introduce Vernon to other monkeys so that he would have a companion, but each time he has shown aggression or severe apprehension to any socialization. Ultimately, it was decided that as much as we wanted Vernon to have a companion, he was choosing the lifestyle that was most comfortable and appropriate for him. Being deprived of physical comfort and companionship at such a young age left a lasting mark on Vernon. We’ll never give up hope, but we also must respect his recovery process.

Although Vernon does not share an enclosure with another monkey, he is content to live near other monkeys. He enjoys interacting with them from a safe distance. This includes vocalizing with and watching his fellow vervet friend Bob. These two love to chat about any happenings at the sanctuary, and when one of them begins an alarm call, the other will follow suit, filling the air with their unique barks. 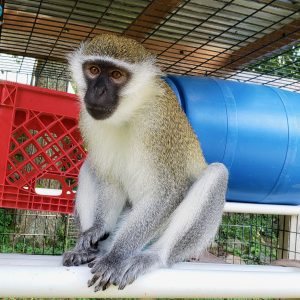 Vernon may never be the perfect vision of recovery. All primates, including humans, are a constant work in progress, and we should be grateful for the milestones we do achieve along the way, however small they may be. We’re constantly learning about ourselves, adapting to our environment and situations, and growing each and every day. Vernon’s strength and resiliency have helped him to grow and reach so many amazing milestones. He no longer has to live in the shadow of fear and neglect but has truly found sanctuary with caregivers who are devoted to making him as comfortable as possible. Watching Vernon go from a scared, abused young monkey when he arrived at the sanctuary, to a monkey who appears to feel quite safe, confident, and secure is immensely rewarding for the caregivers who have supported him along the way. We are so proud of Vernon and so happy to have been given the opportunity to witness his journey toward recovery. You can sponsor Vernon’s sanctuary care by becoming his Primate Pal. 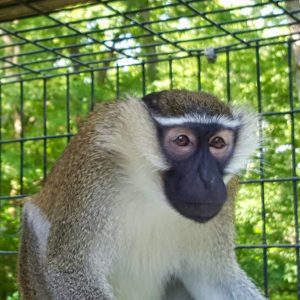